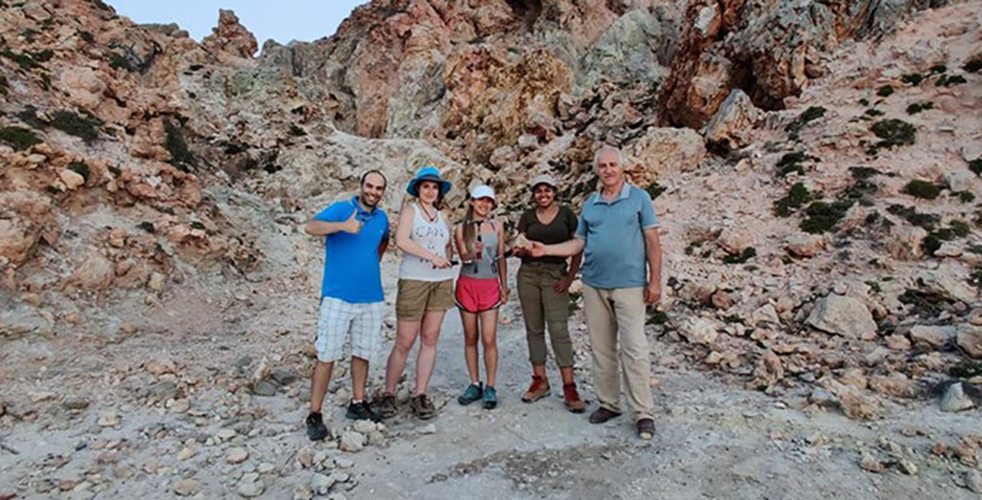 Thick boots, protective goggles and detailed instruction from an experienced professor were all that stood between a small group of Hofstra students and the mouths of dormant volcanos on the Greek islands of Santorini and Nisyros.

Working in rocky terrain where the ground temperature often reached 210º F, the students flew drones to map craters and fractures in the earth; used GPS technology to measure ground vibrations and movements; and collected soil samples from the inside and surrounding area of the volcanos to determine the likelihood of future activity.

“We were the doctors there to give the volcanos their checkup,” said Associate Professor Antonios Marsellos, an expert in geohazards who led the summer expedition.

July 2019 marked the third year that students from Hofstra’s Department of Geology, Environment, and Sustainability traveled abroad with Marsellos to conduct fieldwork in his native Greece.

“The hands-on experience is forever drilled into me,” said geology major Momo Achek ’21, who is researching volcanic material from Greece and Iceland. “Going out into the field and actually applying the methods we learned in class is rewarding on its own. But this trip has certainly broadened my outlook on field research and motivated me to strive for excellence.”

The entire island of Nisyros is a dormant volcano that last erupted  in the late 19th century. However, it is wrong to assume that the volcanos are inactive, Marsellos said. “The problem is that there are few people on Santorini and no one on Nisyros who has lived through a volcano in the region,” he said. “There are no shared stories about the danger; no one advocating for an evacuation plan.”

The volcano on Santorini has not erupted since 1950. Tourists take daily ferry rides into the caldera – the volcanic crater formed by past eruptions – and leisurely swim in its hot, steamy springs. The widespread, but false sense of security makes the job of the scientists who are monitoring the region even more essential.

Unlike some other natural disasters, Marsellos says, “Volcanos do not happen suddenly.” Under the watchful eyes of geologists, eruptions can be predicted, giving populations life-saving advanced warning.

While they were there last summer, Marsellos and his students serviced weather stations and GPS technology that Hofstra installed in 2017 to monitor the volcanos’ activity year-round. No other U.S. educational institution has that kind of technology in the area. Hofstra’s on-site GPS technology records 360º crater movement every 30 seconds and transmits it to the Long Island campus. Even the tiniest shifts in activity and temperature can mean something significant.

Marsellos shares the collected data with scientists in Greece and around the world. He has cultivated strong relationships with geology faculty at the local universities, including Dr. Konstantinos Kyriakopoulos, a volcanologist from the National and Kapodistrian University of Athens, who joins the Hofstra research group each year.

During the Hofstra group’s two-week summer excursion, they worked into the early morning hours and slept late into the following day. These delayed starts allowed the group to miss the most intense heat of the day. Their commute to the volcanos involved a ferry ride and then hiking to their research area. If that sounds grueling, consider that 2017’s student scientists had to rappel into the craters to deploy cables for the thermometers.

Working individually and in teams, the students became proficient at several jobs.

Using the drones for thermal monitoring and mapping faults and fractures in the craters was a favorite activity, and one that had an important, non-scientific reward. Not far from the work site, cows and goats roamed freely, grazing by the olive trees. While flying the drones, the students one day discovered a goat trapped between two rocks. They were able to save it by alerting local authorities.

“They learn how to operate in the field, how to collect and analyze data, and how to take hypotheses formed in the lab or classroom and test them at the work site,” he said.  “This kind of research requires creativity and innovation.”