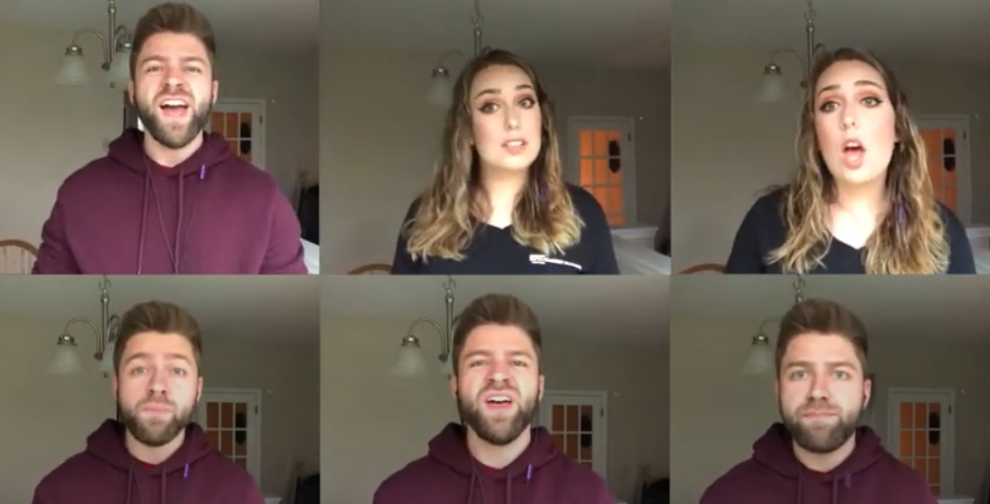 Hofstra music students are filming their recitals and end-of-year projects at home, and submitting their virtual performances to professors for review and posting.

Shayna Trachten ’23, a student of piano instructor and adjunct professor Alina Kiryayeva, shares two performances she recorded as part of a Zoom concert: Prelude in C sharp minor by Sergei Rachmaninoff  and “Reason” by Yiruma.

French Horn instructor Eric Davis, who is part of the Gateway’s Brass Collective, shares a rendition of “The Star Spangled Banner” his quintet recorded to honor essential workers.

“There will Never Be Another You,” is a ‘50s classic performed by Music Education major and bassist Jason Flores ’21. Professor Shawn Lovato, who directs the Jazz Combos ensemble, encouraged Flores and his other students to create performance videos tailored to their individual interests/current personal projects.

Matthew Cerillo ’20, who would have performed the department’s William B. Rosencrans honors recital, sings Ben Moore’s “Lake Isle of Innisfree.” Cerillo, a Music major with a concentration in vocal performance, explains that the song – based on the famous W.B. Yeats poem – is “about finding your happy place and taking it wherever you go in life.”

Guitarist Nicolas Placa ’21, a Music major, performs a moving rendition of “America the Beautiful,” which would have been featured in the annual Spring Jazz Ensemble concert, directed by Professor David Lalama.

And from our alumni:

When Connor Martin ’18 was challenged to arrange a unique a cappella take on “Wheels on the Bus” for a weekly arranging class, he enlisted the help of former classmate Courtney Lee Cox ’19 and produced a video that appeals to both kids and adults. Martin tackles the bass, tenor and alto parts, while Cox handles the soprano track.