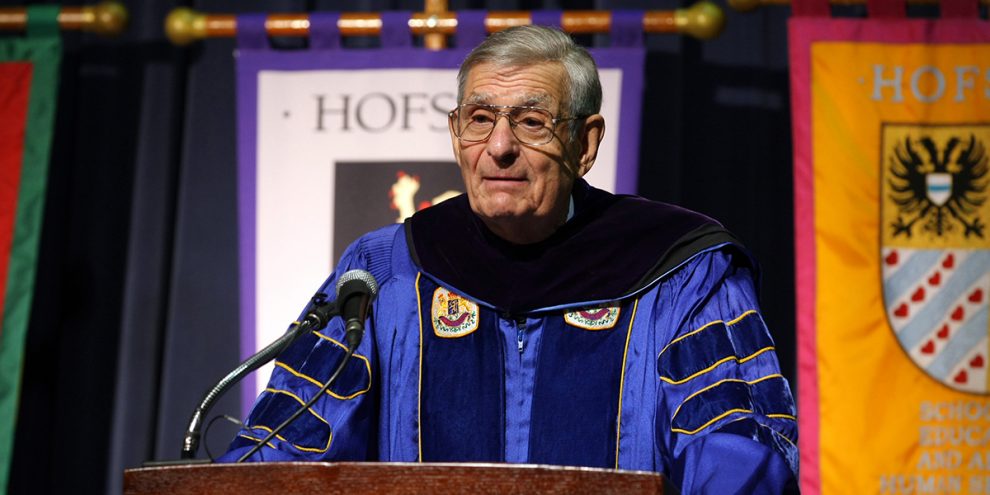 The Hofstra University community is deeply saddened by the passing of Maurice A. Deane, Board of Trustee chair emeritus, philanthropist, business leader and dedicated and generous law school alumnus. In 2011, the University named its law school the Maurice A. Deane School of Law at Hofstra University to honor Mr. Deane, a distinguished alumnus with a unique, 30-year commitment to Hofstra that was first forged when he embarked on a law degree after a successful career as a business executive.

A former member and Chair of the University Board of Trustees, Mr. Deane’s story is defined by distinction in both business and in academics. During his 26-year career with Endo Laboratories, he helped build the firm into one of the largest privately-held pharmaceutical companies in the nation and facilitated its eventual sale to DuPont.  After the sale, Mr. Deane was named President of the company, which operated as an independent subsidiary, until his retirement eight years later.  He continued to serve on Endo’s Board of Directors for several years after his retirement.

At the age of 50, Mr. Deane enrolled in the Hofstra School of Law and became an exceptional student who graduated first in his class.  He was a mentor and personal and professional role model to his classmates and was an active and engaged member of his class.  At the 1981 commencement exercise, he received awards for both constitutional law and evidence.  The award currently bestowed on the law school valedictorian each year at graduation is now named the Maurice A. Deane Award in his honor.

“Maurice Deane was in every way a remarkable and extraordinary person, of impeccable integrity and with a deep commitment to academic and professional excellence,” said Hofstra University President Stuart Rabinowitz. “He was a brilliant student, distinguished alumnus and valuable advisor, trustee and chair emeritus of the Board of Trustees. Hofstra University today is a far better place for his dedication and more than 30 year involvement with us…as a student, as a leader, as a donor and as an involved alumnus.”

Over the next 30 years, Mr. Deane’s bond to Hofstra and the law school deepened as he contributed to the university community in new ways, filling the roles of advisor and benefactor. As a University trustee and then Chair, he guided the university with particular attention to academic excellence.  Mr. Deane was a member of the Board of Trustees from 1982 to 2007, serving as its chair from 1989-1991. In 2008, he was named Chair Emeritus.

Mr. Deane had also endowed a Distinguished Professorship in Constitutional Law, as well as a law school scholarship with his wife, Barbara. He participated in the Alumni Mentor Program, served on committees for a number of key events, including the University’s 75th Anniversary and the annual Gala Ball, and had been honored as a recipient of the Alumni Award, the Estabrook Award and as a member of the William and Kate Hofstra Honor Roll, a roster of individuals who have made major contributions to the University.

“Mr. Deane’s impact on Hofstra Law’s past, present, and future is immeasurable,” said Judge Gail Prudenti, dean of the Maurice A. Deane School of Law. “He was a model student with an incredible passion for learning, and he was a dedicated and extraordinarily generous alumnus. His commitment to Hofstra Law will continue to be felt as we enter our next 50 years as a law school this fall.”

Beyond his generosity to Hofstra, Mr. Deane and his wife Barbara were active volunteers and generous benefactors to many causes and organizations.  The family has been involved with Mount Sinai Medical Center, where the Barbara and Maurice Deane Prostate Health & Research Center is named in their honor.  In addition, Deane had been a trustee of the North Shore University Hospital, and has donated time and resources to numerous organizations including Hebrew Union College and Temple Beth El in Great Neck, on whose boards he served.

All University flags will fly at half-staff to honor Mr. Deane’s lifetime of service to Hofstra University and the Deane School of Law.

His obituary appeared in the New York Times and can be seen here.

TagsBoard of Trustees Maurice A. Deane School of Law obituary