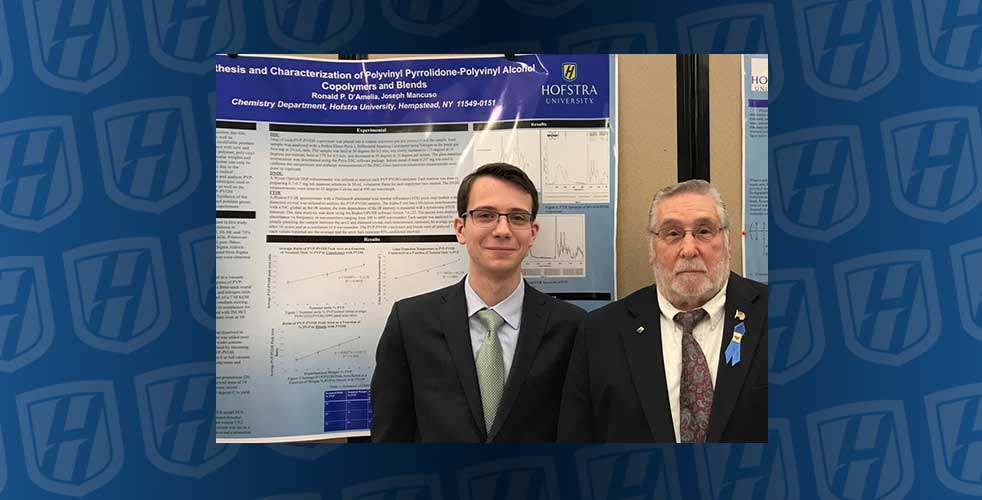 The Barry Goldwater Scholarship and Excellence in Education Foundation was established in 1986 by Congress to honor the work of Senator Barry Goldwater, who served his country for 56 years as a soldier and statesman, including 30 years in the U.S. Senate. By providing scholarships to college sophomores and juniors who intend to pursue research careers in the STEM fields, the Goldwater Foundation helps ensure that the U.S. produces the number of highly-qualified professionals the nation needs in these critical and growing fields. Many past recipients of the Goldwater Scholarships have gone on to win other prestigious awards, including the National Science Foundation’s Graduate Fellowship, the Rhodes Scholarship, the Churchill Scholarship, and the National Defense Science and Engineering Graduate Fellowship.

Professor of Chemistry Scott Lefurgy, Hofstra’s Goldwater Scholarship Campus Representative and a former Goldwater Scholar himself, is tasked with identifying Hofstra’s top STEM students who are headed toward research careers and helping them prepare applications for the award. “Joe was one student whose name consistently came up in conversations with my faculty colleagues,” Professor Lefurgy said. “As I got to know Joe through the editorial process over winter break, I discovered his razor-sharp intelligence, deep humility, and care for others. I could not be more pleased for Joe that he is being recognized on a national stage.  I am very excited to see what Joe’s mind will produce when he is running his own lab.”

Chemistry Department Chair Will Nirode agrees: “Joe is most deserving of this award. His academic and scholastic records speak for themselves. Even more impressive are Joe’s character traits: humble, modest, dedicated to helping others and his overall kindness to everyone.”

Mancuso, a resident of Syosset, N.Y., has long been focused on the study of chemistry, which he considers to be “the central science.” “If you want to understand how and why the body works down to a molecular level, “ he said, “chemistry gives you that in-depth, fundamental view.”

He plans to continue his studies, earn a PhD in chemical biology and pursue a career in research, focusing on developing pharmaceuticals that treat rare diseases. His motivation is deeply personal.

“My father has a rare disease, Langerhans Cell Histiocytosis,” Mancuso said. “It affects approximately one adult out of every million. The emotional and financial impact this condition has had on my father and on my family has definitely impacted my academic trajectory. I want to research not only this disorder, but others that are ill-defined and lack funding. I know first-hand the hardship diseases like this cause people and their families.”

At Hofstra, Mancuso joined Professor Ronald D’Amelia’s Organic/Polymer Synthesis and Characterization Laboratory, where he has been researching the plastics found in cosmetic and healthcare products. Mancuso said: “Hairsprays, hair gels, mud packs – they become a major source of water pollutants when they are washed out of the skin and hair. We are researching processes that would make these more environmentally-friendly.”

Mancuso has collaborated with Dr. D’Amelia and other faculty members on five articles that have gone on to publication in peer reviewed journals. The most recent of these, “The Study of Polyvinyl Pyrrolidone-Polyvinyl Alcohol Copolymers and Blends,” was published in the Journal of Polymer and Biopolymer Physics Chemistry, Vol. 8, in March 2020.

Dr. D’Amelia could not be more proud of his protégé. He says, “One of Joseph’s strongest attributes is his ambition and desire to be challenged. He is constantly striving to learn. Joe is also a role model for his peers. It is not uncommon to find him assisting his fellow classmates with group work and research projects.”

“He has been my research mentor,” Mancuso said, referring to D’Amelia as “a second father”.

“And more than that,” Mancuso continued, “Professor D’Amelia has a sixth sense. He knows how to calm me down when I’m feeling anxious. He has helped guide my decision to go to graduate school for research rather than medical school.”

Even now, with the University closed due to the spread of the coronavirus, Mancuso said he knows his professors are available to him. “They have all been in constant touch with the students and very conscientious and flexible about office hours.”

Living through the coronavirus pandemic has strengthened Mancuso’s resolve about going into a research-oriented career. “When you see the humanitarian and economic toll coronavirus has had worldwide,” he said, “the role of medical research is crucial to bringing this crisis to an end and preventing others that could be as devastating.”