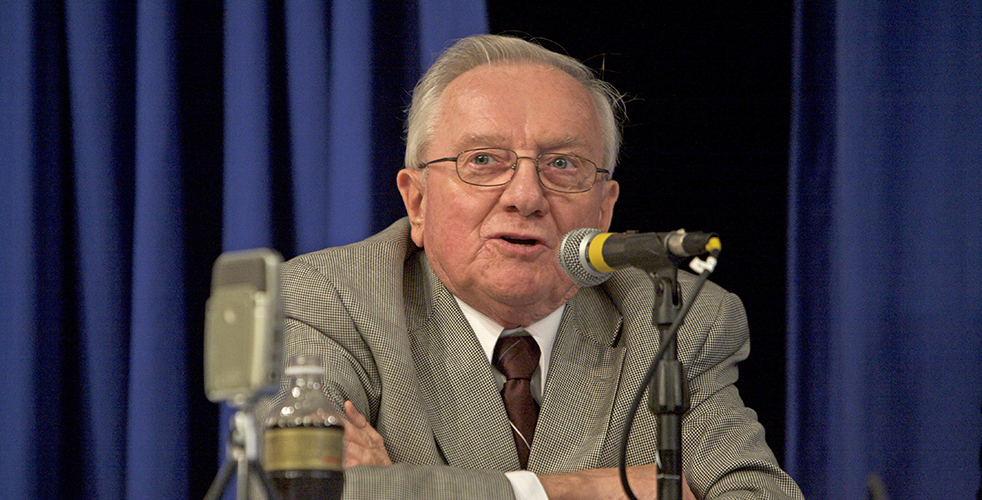 Hofstra University is deeply saddened by the passing of Ed Ingles, longtime professional-in-residence at WRHU 88.7 FM-Radio Hofstra University at the Lawrence Herbert School of Communication. Ingles died Friday, March 6. He was 87.

Prior to joining WRHU in 1996, Ingles led a distinguished career in news and sports radio, serving for 24 years as sports director at WCBS-AM 880.  He covered some of the world’s most high-profile sporting events, including the Olympics, the Muhammed Ali-Joe Frazier prizefight in Manila and the Ali- George Foreman fight in Zaire. He was also was a broadcaster for the New York Jets and St John’s University college basketball for many years.

Through the decades he worked at Hofstra, Ingles mentored Hofstra communications students, helping them perfect their work in radio and advising them how to land jobs in the business. He once said in an interview: “I find when I work with students, I reach down a little deeper to find out how I can help them. Sometimes I come up with stuff I didn’t even know was there. They keep me young.”

Upon learning of his Ingles’ passing, alumnus Jared Greenberg ‘05, who is now an NBA sideline reporter on TNT, wrote on Twitter and Instagram: “Ed Ingles is a national treasure. He put me and hundreds of others in position to succeed. He cared so much. He gave so much. I’ll forever be indebted.”

“When Ed joined WRHU, he was already a legendary sports broadcaster,” Provost Berliner said.  “He brought his skill set and a passion for mentoring students to WRHU as its first executive-in-residence.  The product of his efforts was a top-notch sports broadcasting program and almost a quarter of a century of students who learned from the best and became the best.  Hofstra University is very appreciative of everything that Ed did to help us become the best college radio station.”

Outside of his work at the campus radio station, Ingles helped direct a 2008 Hofstra Cultural Center two-day conference, The Greatest: From Cassius Clay to Muhammad Ali and he was very involved a 2012 conference on the 50th anniversary of the New York Mets. He also regularly participated in the Teen Sportscasting Institute presented by Hofstra’s Continuing Education.

Ingles, a charter member of the WRHU Radio Hall of Fame, retired from Hofstra in January 2019. Later that spring, he was honored with a 2019 Lifetime Achievement Award by the Fair Media Council (FMC) of Long Island. The award, which is reserved for outstanding achievement, was granted with a unanimous vote from the FMC’s Board of Directors.

Bruce Avery, general manager of WRHU, said of Ingles, “He is the most decent human being I’ve ever known, and inspired people to be all they can be.  He touched the lives of virtually everyone who came through the doors of WRHU and mentored some of the best in the business today.”

Ingles is survived by his wife, Margaret, and their daughter, Diana, who is a Hofstra alum. A memorial service on campus is being planned for a future date. In his memory, all flags on campus will be lowered to half-staff.