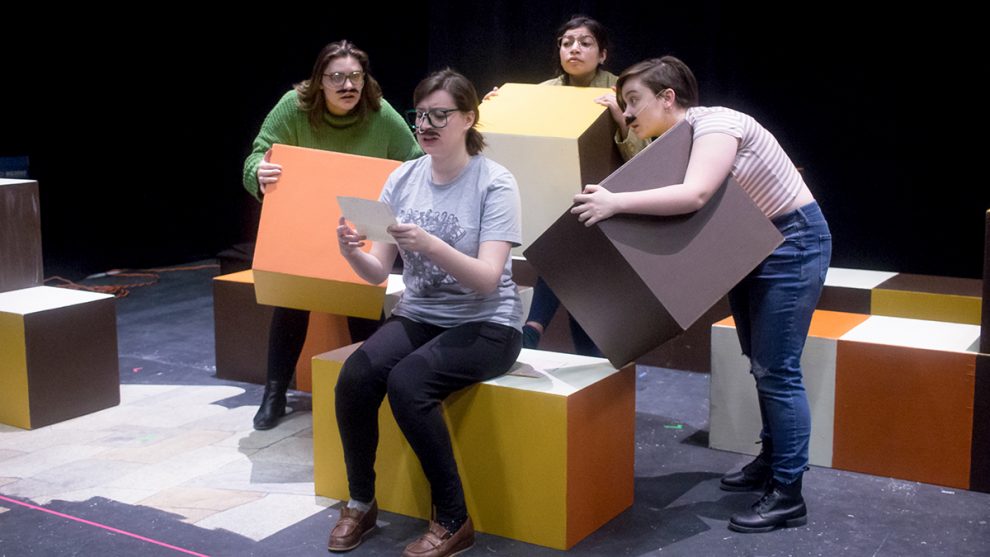 Along with a debut production of Troilus and Cressida, Hofstra University’s 71st Annual Shakespeare Festival includes a one-hour adaptation of Twelfth Night titled What You Will and a concert of early music performed by the Hofstra Collegium Musicum. The productions will be held on Saturday, March 7, at 2 p.m. in the Toni and Martin Sosnoff Theater at the John Cranford Adams Playhouse.

Hofstra has been presenting these one-hour adaptations since 2007 as a way to introduce young theatergoers to the works of William Shakespeare. What You Will  was adapted from the comedy Twelfth Night by Hofstra Adjunct Professor of English Maureen Connolly McFeeley. It has been reimagined and directed by Professor Ilona Pierce to take place during the 1970s. Featuring an all-female cast, What You Will! features a rock soundtrack, a minimalistic set, hip ‘70s costumes, and an unusual wardrobe of mustaches to help set the male characters apart from the female.

As is the tradition of the one-hour Shakespearean companion plays, the cast of What You Will is performing the play at area high schools. The tour gives Hofstra students valuable experience, because they are in charge of managing the production logistically and artistically.

Concerts drawn from the rich treasury of early music are the signature of the Hofstra Collegium Musicum, one of the longest-running performing groups at the University. The ensemble is celebrating 51 years with this year’s concert titled A Garden of Earthly Delights: Pastoral Music from the Early 17th Century, featuring works by John Dowland, Thomas Campion, John Bennet, Robert Johnson, and Giulio Caccini.

In Shakespeare’s epic tale of war-crossed lovers, Troilus and Cressida swear they will always be true to one another. But in the seventh year of the siege of Troy, their innocence is tested and exposed to the savage corrupting influence of war, with tragic consequences.

WHAT YOU WILL
A One-Hour Twelfth Night
by William Shakespeare
Adapted by Maureen McFeely
Directed by Ilona Pierce
A one-hour adaptation of Shakespeare’s comedy, suitable for young audiences.

Performance with What You Will: Saturday, March 7, 2 p.m.

Director Dr. Christopher Morrongiello explains that many of the earliest operas took place in idealized settings celebrating nature. “They were given the title ‘pastoral’ or ‘dramma pastorale.’ We will follow this tradition of the pastoral and perform lute songs and madrigals about shepherds, nymphs, flowers, trees, bowers, springs, birds, bees, grasshoppers, ants, flies, zephyrs, and other wonders of nature.

The Hofstra Collegium Musicum is made up largely of Hofstra students, with several alumni and members of the faculty and community also taking part.  It is comprised of a chorus, soloists, and ensembles of viols, recorders, krummhorns, sackbuts, cornetto, Renaissance flute and drum, medieval instruments, and some modern orchestral instruments.

Members of the Hofstra community receive two free tickets upon presentation of a current HofstraCard. For tickets and information call the Hofstra Box Office at 516-463-6644, or purchase tickets online. If seats are still available on the day of performance, tickets will be sold at the door starting 90 minutes prior to show time at the theater box office window.