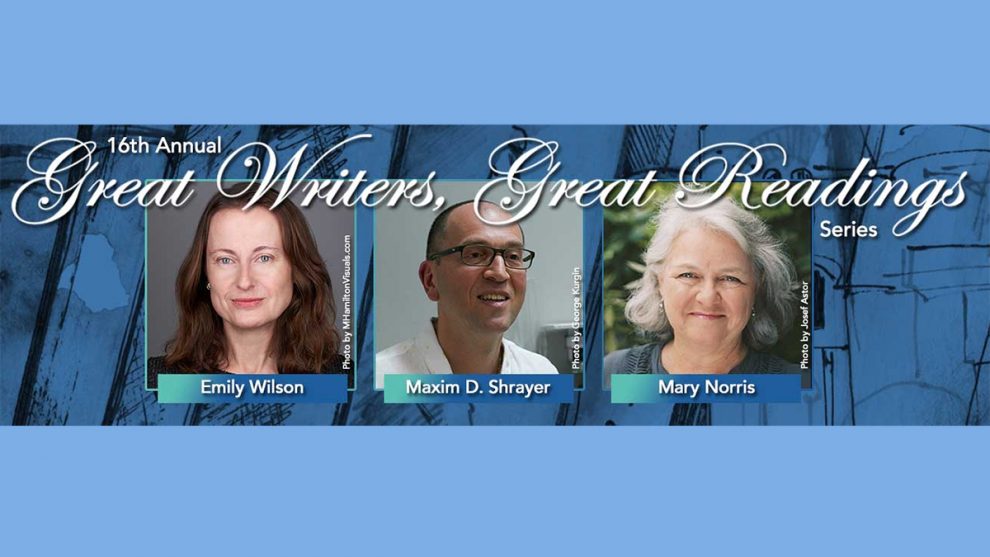 Emily Wilson, Maxim D. Shrayer, and Mary Norris are the guests for the Spring 2020 Great Writers, Great Readings Series. This program, now in its 16th year, features conversations with authors, who discuss their craft and read from works that are well-known and in progress.  Select books by the writers are available for sale and signing.

Admission to Great Writers, Great Readings events is free and open to the public. The series is presented by Hofstra University’s Department of English, the MFA Program in Creative Writing and the Hofstra Cultural Center.

For more information on Great Writers, Great Readings, visit the website or call the Hofstra Cultural Center at 516-463-5669.

Emily Wilson is a professor of Classical Studies and graduate chair of comparative literature and literary theory at the University of Pennsylvania. She was recently appointed the College for Women Class of 1963 Term Professor in the Humanities. She has been honored with an American Council of Learned Societies National Endowment for the Humanities (NEH) Fellowship, the Rome Prize NEH Fellowship for the Humanities in Renaissance and Early Modern Studies, and, in the fall of 2019, a MacArthur Fellowship. Her books include Mocked with Death: Tragic Overliving from Sophocles to Milton (Johns Hopkins, 2005); The Death of Socrates: Hero, Villain, Chatterbox, Saint (Harvard, 2007); and The Greatest Empire: A Life of Seneca (Oxford UP, 2014). Wilson is the classics editor of the revised Norton Anthology of World Literature. Her verse translations include Seneca: Six Tragedies (Oxford, 2010); four plays by Euripides in The Greek Plays: Sixteen Plays by Aeschylus, Sophocles, and Euripides (Modern Library, 2016); The Odyssey (Norton, 2017); and Oedipus Tyrannos (Norton, forthcoming). She is working on a new translation of The Iliad.

Maxim D. Shrayer is a bilingual author, scholar, and translator. He is a professor of Russian, English, and Jewish Studies at Boston College, where he co-founded the Jewish Studies Program, and director of the Project on Russian and Eurasian Jews at Harvard University’s Davis Center. Shrayer was born and grew up in Moscow. In 1987, he and his parents – writer and doctor David Shrayer-Petrov and translator Emilia Shrayer – left the USSR and immigrated to the United States. Shrayer has written more than 15 books of fiction, nonfiction, criticism, and biography in English and Russian, among them the internationally acclaimed memoir Leaving Russia: A Jewish Story, the collection Yom Kippur in Amsterdam, and the anthology Voices of Jewish-Russian Literature. His works have been translated into nine languages. Shrayer won a 2007 National Jewish Book Award, and he received a Guggenheim Fellowship in 2012.

Mary Norris worked as a copy editor at The New Yorker for more than 30 years, an experience that formed the basis of her first book, Between You and Me: Confessions of a Comma Queen (Norton, 2015), a New York Times bestseller. It was followed by Greek to Me: Adventures of the Comma Queen (Norton, 2019), which Booklist described as “a delicious intersection of personal essays, etymology, and travel writing.” Norris has written for The New Yorker, The New York Times Book Review, The Wall Street Journal, and The Times Literary Supplement. She also created a series of videos for The New Yorker called “Comma Queen.”

Graduating students will read excerpts of the fiction, nonfiction and poetry they have been developing in class.