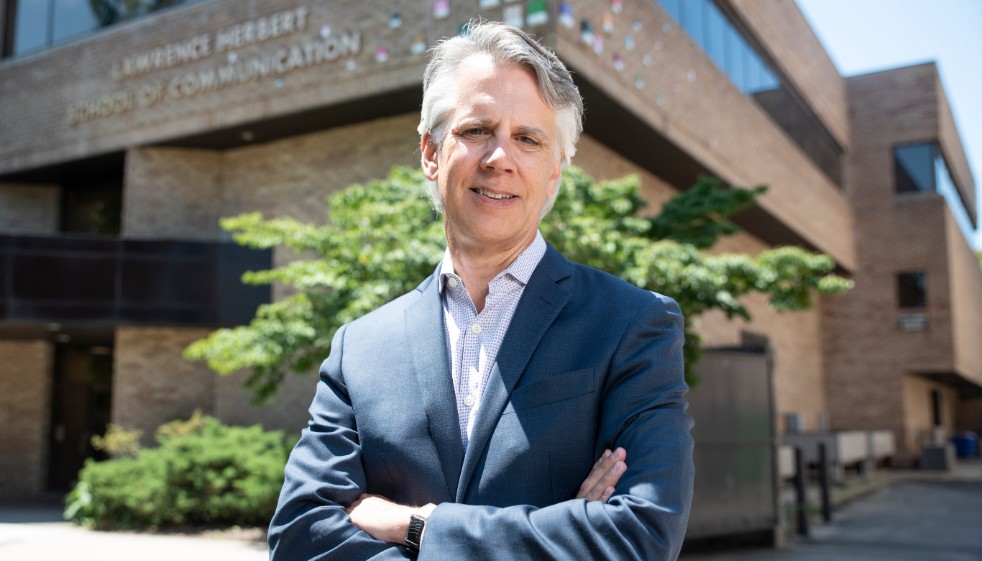 Mark Lukasiewicz, dean of the Lawrence Herbert School of Communication, was named one of the nation’s top journalism educators for 2020 by Crain’s NewsPro magazine. He was nominated by students, NewsPro readers, and members of leading journalism organizations.

Dean Lukasiewicz was recognized as a “Noteworthy Journalism Educator” for, among other things, spearheading the successful “Hofstra Votes LIVE” Election Night multiplatform broadcast within months of joining Hofstra University in 2018.  A Herbert School first, the ambitious live production pooled the talents of almost 200 students, faculty, and staff to cover local, regional, and national races, and was simulcast on “Hofstra Today” and WRHU 88.7 FM, the school’s student-run television news program and radio station, respectively.

A veteran producer, journalist, and media executive whose career spans four decades, Dean Lukasiewicz was most recently senior vice president of specials at NBC News, planning and supervising coverage of major breaking news events such as the death of Osama bin Laden, the visit of Pope Francis to the United States, and presidential elections and debates from 2004 to 2016. He also served as NBC News’ first vice president of digital media, and later as executive-in-charge of the NBC News Group Transformation Project, a multiyear redesign and reimagining of technology, workspace, and workflow across NBCUniversal’s news platforms.

Before NBC, Dean Lukasiewicz spent 11 years at ABC News where he was executive producer of “Good Morning America,” senior producer of “World News Tonight with Peter Jennings,” and senior producer of “Primetime Live with Diane Sawyer and Sam Donaldson.”  He has produced numerous live and long-form programs, winning 10 Emmys, two Peabody Awards, and the Grand Prize of the Robert F. Kennedy Journalism Awards, among other journalism and international film festival awards.

A native of Canada, Lukasiewicz began his career as a reporter and columnist with The Globe and Mail and was also a senior producer with the Canadian Broadcasting Corporation.