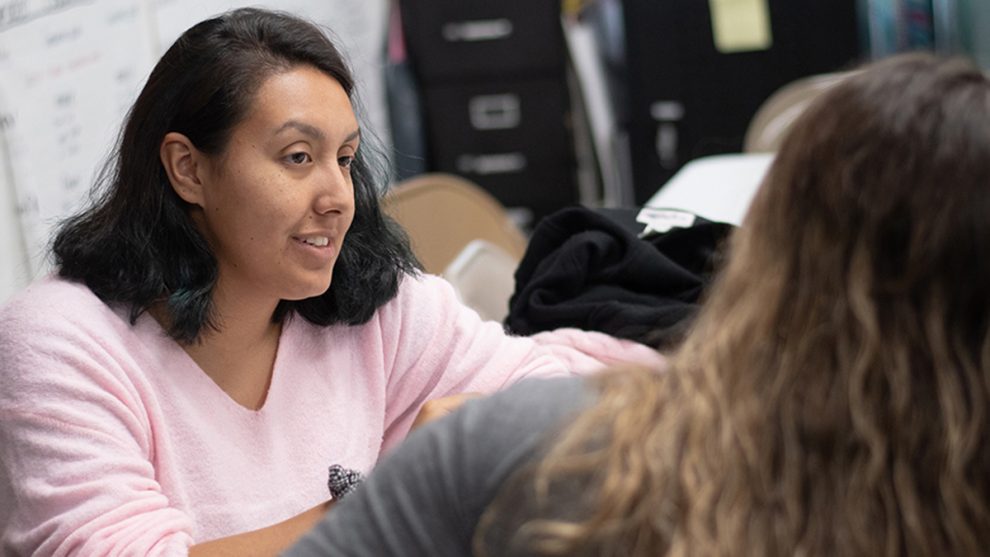 So when her professor emailed calling for interns to work at CARECEN (the Central American Refugee Center), where they would help local immigrants prepare for the citizenship exam and build their English language skills, Mendoza knew she had to be a part of it.

The partnership between Hofstra and CARECEN, an agency that provides legal and educational services to immigrants, launched in fall 2019 with a cohort of 40 students from a variety of majors from the Hofstra College of Liberal Arts and Sciences (HCLAS).

In offices decorated with brightly colored posters on English grammar rules and reproductions of the Declaration of Independence and the US Constitution, the Hofstra students tutor immigrants on civics and history. They also help the clients complete the daunting piles of paperwork required for the citizenship process.

Sitting with a client in the CARECEN offices, Mendoza speaks softly in Spanish, reviewing a number of topics that are likely to appear on the citizenship exam. “What is the capital of New York?” “Can you name the two major political parties in the U.S.?” “What are some powers of the state?”

Yet it is Mendoza who feels academically enriched from her time at CARECEN. “It’s made me a better student,” she said. “It has given me more examples that I can use when I am writing my class papers and participating in discussions about current politics.”

Said Benjamin Rifkin, dean of Hofstra College of Liberal Arts and Sciences: “These kinds of experiences stay with students a long time. When students are working with an immigrant or refugee, they learn firsthand about the political and social issues they hear about in class and on the news every day. It helps them grow their sense of compassion for those whose life experiences may have been very different from their own.”

Housed on the second floor of a small building in downtown Hempstead, CARECEN has offered legal assistance, English language tutoring and other advocacy services to immigrants for 37 years. Due to state budget cuts, the organization announced in 2018 that it had to discontinue its language and tutoring services. Upon learning of the organization’s financial difficulties, Hofstra President Stuart Rabinowitz pledged university support.

“If you want to play a part in changing the world – and so many of our students do – then you have to understand the way it works.”

“Diversity, community service and civic engagement are central to Hofstra’s mission,” said President Rabinowitz. “We have many long-standing programs with other non-profits, schools and civic organizations in our community in which our students and faculty have the opportunity to work with community members and develop an understanding of the wider world. CARECEN’s English language program is vital to the success of the Hempstead community, and therefore, to the Hofstra community.”

Adjunct Assistant Professor of Sociology Rosemary McGunnigle-Gonzales is an advisor to some of the CARECEN interns.

“What’s great about the CARECEN internship,” she added, “is that it gives our students a way to connect what they are learning in the classroom to the real world and understand how they can make a difference through service.”

Pauline Medina-Fournier ‘20 was struck by CARECEN’s “warm, welcoming atmosphere. People feel safe,” she said. “They’re not judged for what they don’t know.”

Medina-Fournier, a double major in sociology and rhetorical studies, said her most memorable client was a man who never learned to read or write in Spanish or English.

“I taught him to write the alphabet,” she recalled. “When he wrote his name for the first time, the look on his face made it so rewarding.”

Elise de Castillo, a 2012 graduate of Hofstra Law and executive director of CARECEN, sees a reflection of herself in the students who are volunteering for the organization.

“About 15 years ago I was that bright-eyed student looking to have experiences to help others, and that time was a fundamental part of my development,” she said. “That part of my education lay the bricks in the road that got me to where I am today.”

Asked about the top quality she is looking for in Hofstra interns, de Castillo doesn’t hesitate: “A big heart. Nobody comes in here with all the skills that are needed. What is key is a willingness to help and contribute to their community and to look out for the well-being of their new American neighbors. Everything else can be learned.”