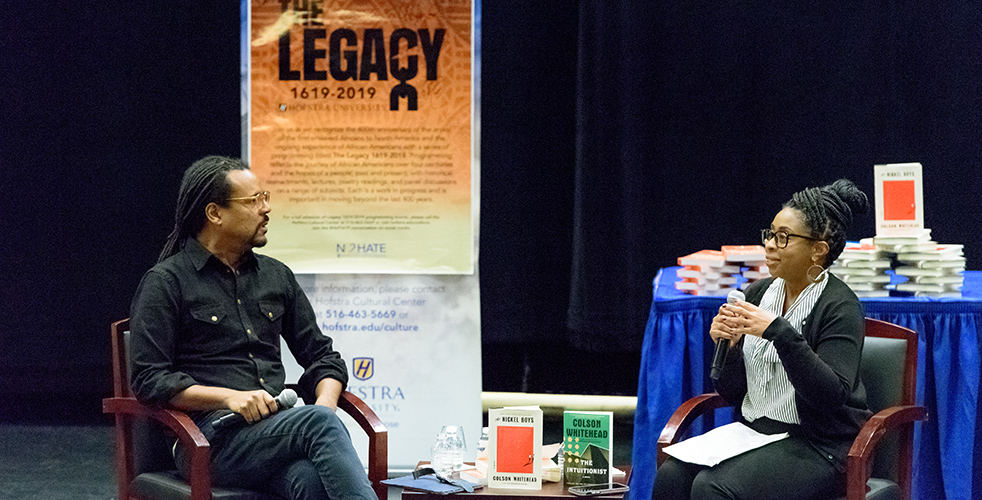 New York Times best-selling author Colson Whitehead was the final fall guest of the 16th annual Great Writers, Great Readings series. Audience members in the filled-to-capacity Helene Fortunoff Theater were charmed by Whitehead’s insightful and funny presentation, during which talked about his climb as a reporter for the Village Voice to his Pulitzer Prize-win for the 2016 novel The Underground Railroad.

“I wanted to be a writer from a very young age,” he told a group of Hofstra creative writing students in a master class before his public presentation. In addition to Toni Morrison and Ralph Ellison, he cited comic books, horror and science fiction as major influences. He revealed that George Romero’s Night of the Living Dead –often credited as one of the first films to feature a black hero – had a profound effect on him and inspired his 2011 zombie novel Zone One.

One student asked Whitehead which of his books is his favorite. Like many authors Whitehead did not single one out, but replied, “The more recent the work, the more reflective it is of who I am now.” He shared that he meticulously researches his topics and profusely outlines before beginning to write.

Another student asked, “At what point do you start believing that what you are working on is good?” Whitehead responded that it is not unusual to have a number of productive, encouraging days, followed by a bleaker, more discouraging stretch. “When I’m finally about a third of the way through a book, I’ll share it with my wife, my editor and agent to see if it’s working the way I want it to.”