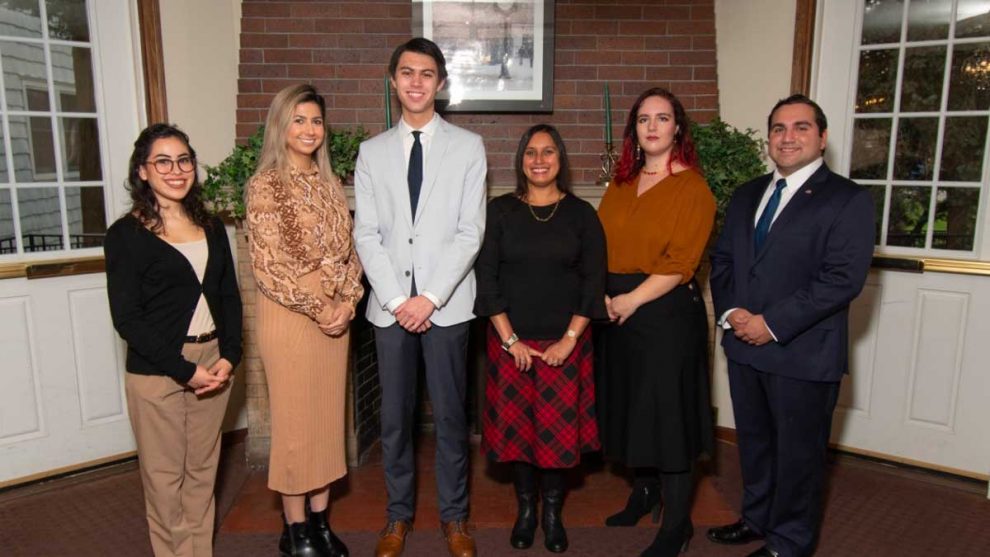 Five students with outstanding academic records and keen interest in American politics will participate in a seminar at The Washington Center examining the 2020 presidential race from primary to general election.

The seminar, which runs Jan. 6 – 17, 2020, will give students the opportunity to hear from journalists, campaign strategists and political officials, who will share their expertise and insights about how the presidential race will unfold.

This is the eighth year that Hofstra has sent students to the Washington Center January seminar, supported by scholarships provided by Scott Rechler, chief executive officer and chairman of RXR Realty LLC.

Sahar Caravan ’21 is an Honors College student majoring in biochemistry who plans to pursue a career in medicine. She conducts research in the University’s chemistry department, exploring toxic components of vaping fluids.  In her free time, she is a volunteer doula at NYU Winthrop Hospital, and conducts research in radiation oncology with the Feinstein Institute for Medical Research.  Coming from an Afghan-American household, she has great interest in foreign policy.  Her passion for medicine, as well as her research, has sparked a keen interest in public health and women’s health policy. She plans to combine her love for medicine and policy as a physician.

Alena Clark ’20 is a global studies and anthropology major with minors in Chinese and geography. She has worked at Hofstra’s Office of Student Leadership and Engagement for three years, is a Global Peer Mentor, an Honors College student and mentor, and a peer teacher. When not doing research for her majors, she enjoys writing, drawing/art, and adventuring into New York City to experience new activities and food, and to meet new people. Her career goals include participating in international affairs, specifically human development and cultural preservation.

Benjamin Morawek ’21 is a political science major and president of “Veritas” Philosophy Club. He is a resident of Bonney Lake, Washington, and a graduate of Sumner High School, where he completed the full International Baccalaureate Diploma Programme.  Aside from politics, Benjamin’s interests include philosophy, economics, ancient literature, film, and theater.

Cristian Sanchez ’21 is political science major with minors in civic engagement and history.  He has served as a Student Government Association Senator for two terms.  In 2019, Cristian ran for a Board of Tax Assessment in the City of West Haven, Connecticut.  As a student who is politically involved on campus and in his local communities, he seeks to ignite Hofstra’s spirit in Washington D.C. while connecting with activists, media, and elected officials.

Alyson Sann ’20 is a triple major in political science, public policy and public service, and global studies, with a concentration in human rights. She will graduate in May 2020, completing her degree in three years. She is a first generation, Latinx college student from Los Angeles, California. Alyson is a public affairs intern at Planned Parenthood of Nassau County, where she has gained experience in grassroots organizing and community outreach. She is also a member and former vice president of Hofstra’s Get Global student club.