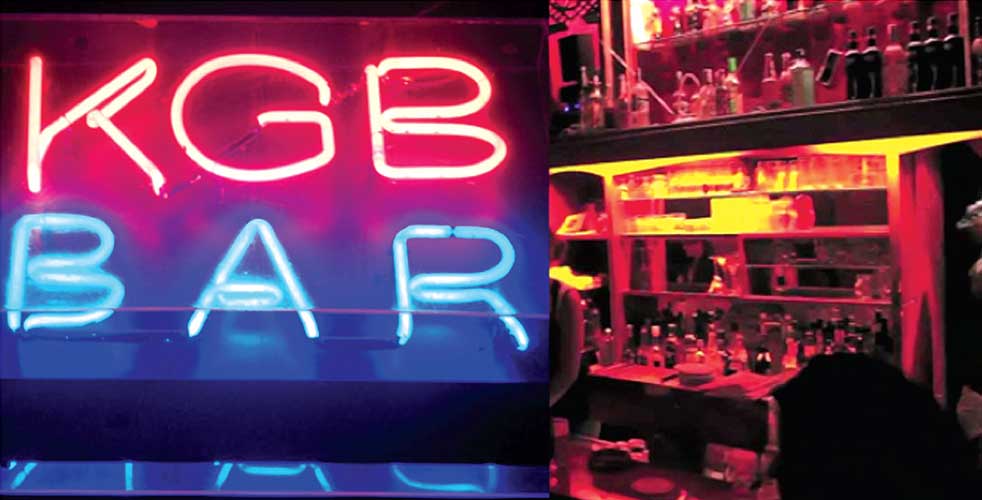 Students and alumni from Hofstra’s MFA in Creative Writing program will read excerpts of their work at Manhattan’s KGB Bar, a New York literary institution that regularly hosts readings by seasoned and emerging writers. The MFA program typically presents an evening at the KGB Bar once a semester.

The students –  Ashrena Ali, Glenn Greenberg, Benny Varotta, and Kehan Yu  – will read from the poetry and fiction they have worked on in class. Alumni M.J. Flood and Dina Santorelli will read excerpts of newly published books they have written.

The Hofstra MFA reading is scheduled for Friday, November 22, 7-9 p.m. The KGB Bar is located at 85 East 4th Street, New York, NY, in the East Village (just off 2nd Avenue). There is no minimum age to enter the bar. However, those under 21 years old will not be served alcohol under any circumstances.

More about the readers:

Ashrena Ali is in her final semester of the MFA program. She’s a native of Queens, where she lives with her mother, step-dad, and younger sister. She graduated from Queens College in 2016 with a Bachelor’s in English. Ashrena enjoys kayaking in Cold Springs, eating her mom’s pan-seared lamb chops, and listening to her boyfriend rant about fitness. Ashrena recently became the human resources coordinator at Carolina Herrera and is currently working on her thesis, fashioning a sequence of poems in the lens of her childhood self about her mother’s emotional and mental turmoil due to her marriage.

Alumnus M.J. Flood is a husband and a father of two little girls and a baby angel. Residing in Long Island, New York, he is a high school literature and writing teacher and the author of Where Are You? Finding Myself in My Greatest Loss, his first published work.  He is also the writer/director of Too Much Noise — a short film in American Sign Language — which has appeared in several film festivals and won the Best Original Idea award at New York City’s 2018 Chain Film Festival.

Glenn Greenberg is currently working towards an MFA in creative writing. He is an award-winning editor and writer whose work has appeared in such print and web publications as Entertainment Weekly, People, SyFy Wire, Salute, TIME Magazine For Kids, TIME Edge, Scholastic News, Time Out New York, and Back Issue. Glenn has worked for Marvel Comics and DC Comics, on such world-famous franchises as Spider-Man, the Hulk, the Silver Surfer, Thor, Iron Man, Dracula, Star Trek, and Superman. He has also written two Star Trek novellas, “The Art of the Deal” and its sequel, “The Art of the Comeback,” for Simon and Schuster, and the X-Files novella “XXX,” which in 2017 was nominated for a Scribe Award for Best Short Fiction by the International Association of Media Tie-in Writers.

Voted one of the best Long Island authors for two consecutive years, alum Dina Santorelli writes thriller and suspense novels. Her debut novel, Baby Grand, the first book in her Baby Grand Trilogy, was a #1 Political Thriller and #1 Kidnapping Thriller on Amazon Kindle and reached the Top 30 in the Paid Kindle Store. Dina has been a freelance writer for more than 20 years and currently serves as the executive editor of Salute and Family magazines. Over the course of her career, she has interviewed many celebrities, including Maria Shriver, Martina McBride, Sarah McLachlan, Gary Sinise, Kiefer Sutherland, Michael Strahan, Norman Reedus, Vince Vaughn, James Gandolfini, Tim McGraw, Carrie Underwood, and Kevin Bacon. Since 2010, she has collaborated on a variety of nonfiction titles, and her book Daft Punk: A Trip Inside the Pyramid has been published in several languages. Dina also lectures for Hofstra’s Continuing Education department and is a SELF-e Ambassador for the Library Journal.

This is Benny Varotta’s second year in Hofstra’s MFA program in creative writing. He writes mainly fiction and has been working on his novel since February 2019, from which he will be reading a section.

Kehan Yu comes from Henan Province, China. She is currently a student in the MFA program, studying creative writing with a concentration in fiction. Kehan is obsessed with novel writing and has self-published two novels as ebooks on a Chinese website.