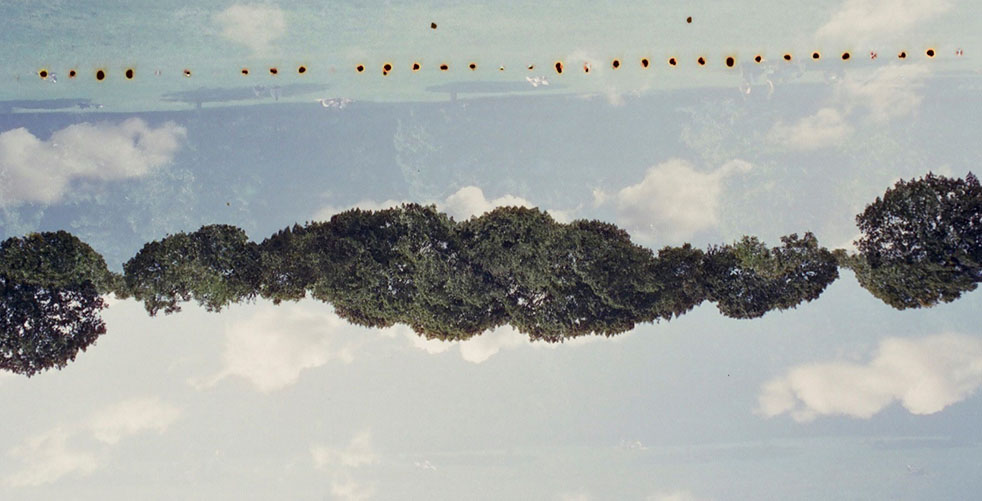 Photography by Skye Hilton ‘04, a Brooklyn-based artist, director and producer, will be on display at Hofstra University’s Rosenberg Gallery, November 13-December 15, 2019.

Hilton, who graduated from Hofstra University with a degree in film production, has worked on a number of hit television shows for TLC and the Food Network. However, he has had a lifelong interest in photography, encouraged by his mother, a multidisciplinary artist. While he was busy building a successful career in film and television, he continued to work on evolving his photography skills.

Skye Hilton with his photograph, “Prospect”

Hilton exclusively shoots on 35mm and 120 mm film, with all effects done in camera and no edits in post production. His intent is to capture the image as it is with a single exposure or disturb it in the moment through the use of multi-exposures. His photography takes advantage of the organic nature of analog stocks and embraces happy accidents that happen with film.

After several years spent directing the hit TLC show What Not To Wear, Hilton shifted his focus in the TV world to incorporate his passion for food. Since then he has directed and produced shows like Food Network Star, Worst Cooks in America, Beat Bobby Flay and People Magazine’s Sexiest Chef Alive. As a producer, his films have been accepted into the Kansas City FilmFest International and the Bohemian Festival, among others. Hilton has produced digital work for O, The Oprah Magazine, as well as the Bernie Sanders campaign and Goldbelly.com.

There will be an opening reception for Hilton’s Rosenberg Gallery exhibition on November 13 from 2-4 p.m. He will give an artist’s talk from 3-4 p.m. in room 115 Calkins Hall. For more information call the Department of Fine Arts, Design, Art History at 516-463-5474.