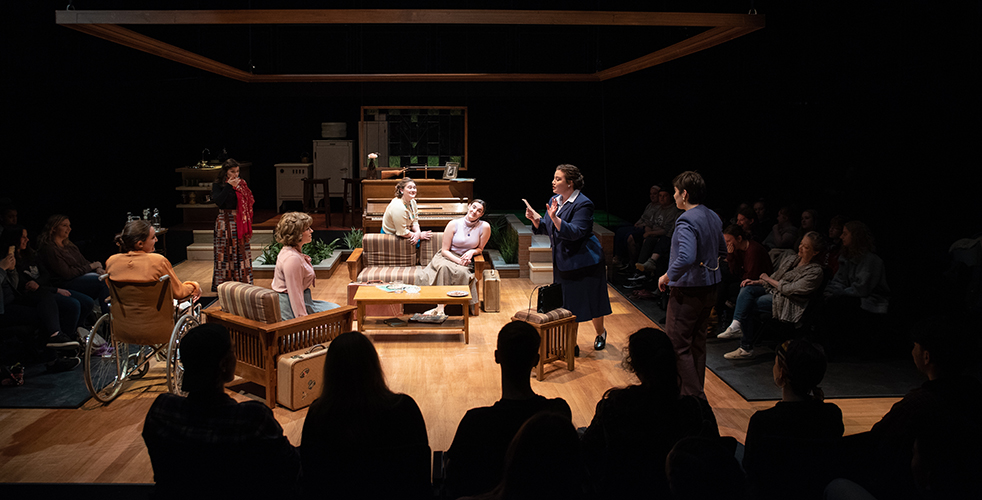 Fefu and Her Friends, the Obie Award-winning play by María Irene Fornés and directed by guest artist Tatiana Pandiani, will have its Hofstra premiere at the Joan and Donald Schaeffer Theater, November 8-17, 2019.

Presented by the Hofstra Drama program, the show follows Fefu, who is hosting a gathering for seven of her female friends in New England in 1935. The action, which takes place in a single day, is filled with twists that challenge the women’s relationships with one another and has them reconsider the paths their lives have taken. The story resolves in a surprising twist that leaves the characters fighting for their sanity.

“Fefu is a very challenging play,” said Pandiani. “It doesn’t have a very straightforward plot. It’s a very poetic, very symbolic play. It’s tough, but I was excited to take it on. It’s a really complicated piece of writing.”

Madeline Oldham ‘21, who plays “Cindy” in Fefu and Her Friends, has valued the opportunity to work with Pandiani on this renowned work of feminist theater. “Having a guest director has been very motivating,” she said. “Tatiana has brought an energy to this production that has really motivated us to do our best work.”

Performed on an intimate set that looks like a home, this production and cast came together in a little over a month, starting rehearsals in early October after a single read-through in September.

Oldham says, “Those of us in the cast have developed a mutual respect for each other’s process. Having developed a deep trust has really contributed to our ability to block the show quickly and then spend time perfecting the play’s very intense moments.”

Pandiani, who is originally from Buenos Aires, has said her work is inspired by artists like Fornes, Frida Kahlo, Pina Bausch, Bob Fosse, Bertol Brecht, and Astor Piazzola. She recently directed the world tour of La Negrophilie by Zakiya Markland at the Frank Collymore Hall in Bridgetown, Barbados; the Ubumuntu Arts Festival in Kigali, Rwanda; and the Kampala International Theatre Festival in Kampala, Uganda. She was an assistant director on The Glass Menagerie, directed by Sam Gold at Toneelgroep Amsterdam, Ivo Van Hove’s company. Pandiani was a 2017-2018 Directing Fellow at New York Theatre Workshop, a Teaching Artist at the Atlantic Theatre Company and the Artistic Associate at Miami New Drama. She was a 2018 National Directing Fellow at the Eugene O’Neill Theater Center/National New Play Network/Kennedy Center. She has been the associate director of What the Constitution Means to Me by Heidi Schreck on Broadway and Off-Broadway, and will be traveling with the play when it embarks on its first national tour this January 2020.

Tickets to each performance are $10; $8 adult 65+. Members of the Hofstra community receive two free tickets upon presentation of a current HofstraCard.

For tickets and information, call the Hofstra Box Office at 516-463-6644 or purchase tickets online. If seats are still available on the day of performance, tickets will be sold at the door beginning 90 minutes prior to showtime. (Free tickets for members of the Hofstra community must be picked up at the Box Office; they are not available online.)