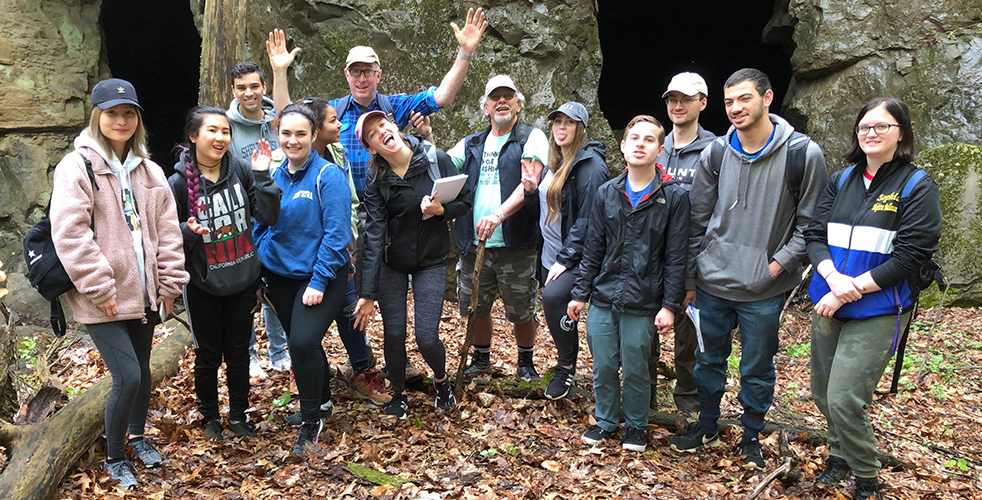 J Bret Bennington, chair of the Department of Geology, Environment and Sustainability , was recently honored for excellence in stimulating interest in the Earth Sciences at the National Meeting of the Geological Society of America in Phoenix, AZ. The award is given annually by the National Association of Geoscience Teachers (NAGT).

Dr. Bennington received the 2019 Neil Miner Award, an honor for which he was nominated by fellow Hofstra professor Christa Farmer, who praised him as “an inspiring leader, an amazingly supportive colleague, a brilliant scientist, and a genuinely fabulous human being,” during the award presentation.

Bennington is known for finding creative ways  to make learning impactful for his students. He dresses up as Charles Darwin to channel how the scientist formulated the Theory of Natural Selection, led a group of students across the America west to follow the total eclipse and traveled with another group to Greece to study volcanic activity on the islands of Santorini and Nisyros. Earlier this year, Dr. Bennington co-directed the two-day Hofstra symposium One Giant Leap: Apollo 11 @ 50, celebrating the 50th anniversary of Apollo 11.

“I have always worked to do my best for my students and never once in my career have I turned down a request to speak to any group, no matter how small, about geology, climate change, dinosaurs, or any other topic relating to earth science,” Bennington said during his acceptance speech. “I consider evangelizing for our science to be an important professional responsibility and I will continue to do all that I can to educate people about the science of geology.”

Bennington joined the Hofstra faculty in 1993. His research in paleontology involves the quantitative analysis of the fossil record to learn about the evolution of ecological communities over long intervals of time. His projects through the years have involved studies of marine ecosystems in the Devonian, Carboniferous, and Cretaceous periods, as well as the statistical analysis of fossil footprints.

The Neil Miner Award is named for a renowned educator with “contagious enthusiasm for geology and unselfish dedication to his students and his profession.” Miner began his career at Cornell College in Iowa as chair of the Geology Department. His most important accomplishments included establishing Camp Norton, a summer geology field camp for students at Cornell College, Knox College, Syracuse University, and Miami University of Ohio in 1940, and organizing the Association of Geology Teachers in 1938, which has evolved into NAGT. Past recipients of the Neil Miner Award have included noted geologists Steven J. Gould of Harvard and J. Harland Bretz of the University of Chicago.