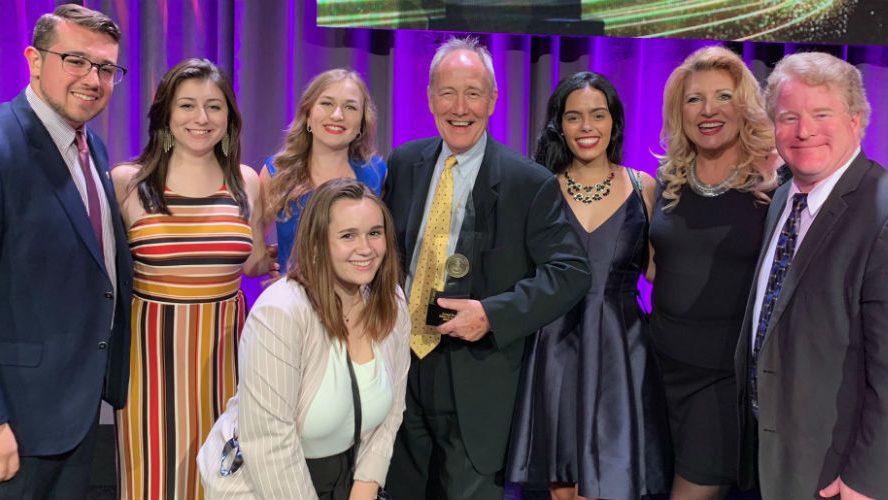 WRHU was one of five finalists up for the award, which was announced at a ceremony in Dallas on Thursday, September 26. The Marconi Awards, named after inventor and Nobel Prize winner Guglielmo Marconi, recognize stations and individuals for broadcasting excellence in 23 categories.

“Radio is alive and well” on college campuses, said Kenny Conrade’20, journalism major and WRHU station manager, as he accepted the award on behalf of the staff. He noted that student journalists “have had great opportunities and work hard every day” to broadcast coverage of events such as professional sports games and major elections, and thanked General Manager Bruce Avery and Operations Manager John Mullen for their commitment to prioritizing the student experience.

WRHU’s 2014 Marconi win marked the first year that non-commercial/college radio stations were recognized.  It was named a finalist in 2016 before winning the award again in 2017 and 2019.

“This Marconi win, coming as it does on the heels of WRHU celebrating its 60th anniversary, cements WRHU’s longstanding position as the top campus radio station in the country,” said Mark Lukasiewicz, dean of the Lawrence Herbert School of Communication, home of WRHU. “Congratulations to all of the students and staff involved in this great achievement for WRHU and our school.”

WRHU was named the nation’s best college radio station for 2018 by BestColleges.com and by the Princeton Review for 2015 and 2016.  Its students have won many national and regional honors from media organizations including the New York State Associated Press Association, Alliance for Women in Media, Press Club of Long Island, the Society of Professional Journalists, and New York Women in Communications.

At Home with the Faculty in Residence
Covering Trump Live