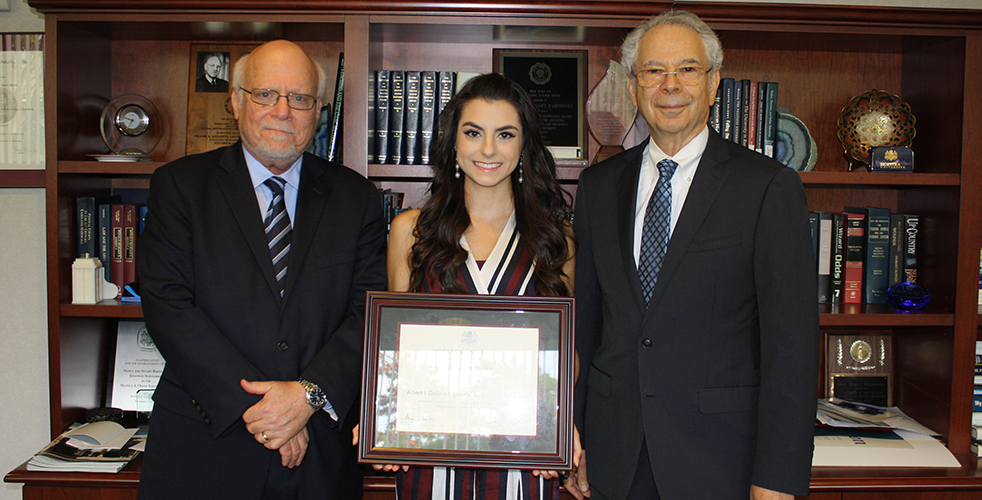 Bianca Nicole Saraniero ’19 is the recipient of this year’s Albert I. DaSilva Memorial Endowed Scholarship for maintaining a perfect grade point average of 4.0 throughout her studies at Hofstra. Earlier this year, Saraniero, who majored in biology, was honored as Outstanding Senior Scholar at Hofstra University’s Celebration of Scholarly Excellence during commencement weekend. She is currently a graduate student at Hofstra, pursuing an MS Ed in Biology Education. She plans to be a New York state secondary education biology and chemistry teacher.

During her time at Hofstra, Saraniero conducted biology education research on “Student Engagement in Relation to Instructional Methods of STEM Higher Education Classrooms” with Biology Professor Jessica Santangelo. She worked for Hofstra Summer Camps as a counselor in the programs for marine biology, criminal justice and video production. She also volunteered for Canine Companions for Independence and raised a service dog that currently works in a rehabilitation center in Virginia.

Saraniero’s scholarship is named for Mr. Albert DaSilva, a noted entertainment lawyer. His wife, Zenia DaSilva, was a professor of Romance Languages and Literature at Hofstra. She has the distinction of being the University’s longest-serving full-time faculty member. Now retired, she taught at Hofstra for 54 years.