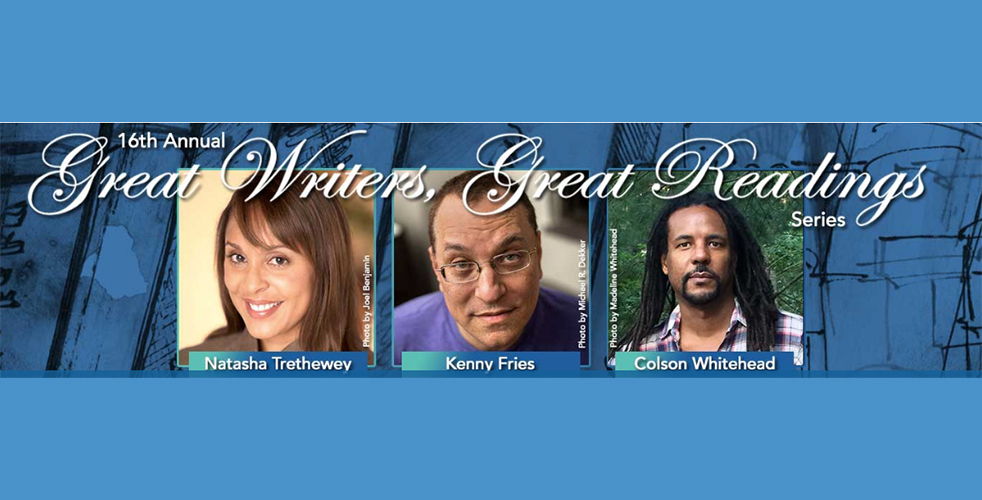 Colson Whitehead, author of the New York Times bestseller, The Nickel Boys and the Pulitzer Prize-winning novel The Underground Railroad, is coming to Hofstra for a reading this fall as part of the Great Writers, Great Readings Series. The series, now in its 16th year, also boasts Pulitzer Prize winning poet Natasha Trethewey, who served two terms as US Poet Laureate, and award-winning memoirist, poet and librettist Kenny Fries. Selected titles by all three authors will be available for sale and signing.

Admission to Great Writers, Great Readings events is free and open to the public. The series is presented by Hofstra University’s Department of English, the MFA Program in Creative Writing and the Hofstra Cultural Center.

Both the appearances by Tretheway and Whitehead are part of The Legacy 1619-2019, a series of  programming presented by the Hofstra Cultural Center recognizing the 400th anniversary of the arrival of the first enslaved Africans to North America and the ongoing experience of African Americans.

For more information on Great Writers, Great Readings, visit the website or call the Hofstra Cultural Center at 516-463-5672.

Natasha Trethewey served two terms as the 19th Poet Laureate of the United States (2012-2014). She is the author of five collections of poetry: Monument (2018), which was longlisted for the 2018 National Book Award; Thrall (2012); Native Guard (2006), for which she was awarded the Pulitzer Prize, Bellocq’s Ophelia (2002); and Domestic Work (2000) which was selected by Rita Dove as the winner of the inaugural Cave Canem Poetry Prize for the best first book by an African American poet and won both the 2001 Mississippi Institute of Arts and Letters Book Prize and the 2001 Lillian Smith Award for Poetry.

Her book of nonfiction, Beyond Katrina: A Meditation on the Mississippi Gulf Coast, appeared in 2010. She is the recipient of fellowships from the National Endowment for the Arts, the Guggenheim Foundation, the Rockefeller Foundation, the Beinecke Library at Yale, and the Bunting Fellowship Program of the Radcliffe Institute for Advanced Study at Harvard. At Northwestern University she is a Board of Trustees Professor of English in the Weinberg College of Arts and Sciences. In 2012 she was named Poet Laureate of the State of Mississippi, and in 2013 she was inducted into the American Academy of Arts and Sciences.

Kenny Fries is the author, most recently, of In the Province of the Gods, which received the Creative Capital literature award. His other work includes The History of My Shoes and the Evolution of Darwin’s Theory, which received the Outstanding Book Award from the Gustavus Myers Center for the Study of Bigotry and Human Rights, and Body, Remember: A Memoir. He edited Staring Back: The Disability Experience from the Inside Out, and was commissioned by Houston Grand Opera to write the libretto for The Memory Stone.

His books of poems include In the Gardens of Japan, Desert Walking, and Anesthesia. His work has appeared in numerous places including The New York Times, Granta, Kyoto Journal, Los Angeles Review of Books, The Progressive, Literary Hub and Catapult. He writes the Disability Beat column for How We Get To Next.

Twice a Fulbright Scholar (Japan and Germany), he received a 2019 Rockefeller Foundation Bellagio Center Arts and Literary Arts Fellowship, was a Creative Arts Fellow of the Japan/US Friendship Commission and the National Endowment for the Arts, and has received grants from the DAAD (German Academic Exchange), Canada Council for the Arts, Ontario Arts Council, and Toronto Arts Council.

He is currently working on Stumbling over History: Aktion T4, Disability, and the Holocaust and Frida Kahlos’s Leg: Essays on Role Models, Disability, and Representation. He teaches in the MFA in Creative Writing Program at Goddard College.

Colson Whitehead is the #1 New York Times bestselling author of The Underground Railroad (an Oprah’s Book Club selection and winner of the National Book Award and Pulitzer Prize), The Noble Hustle, Zone One, Sag Harbor, The Intuitionist, John Henry Days, Apex Hides the Hurt, and one collection of essays, The Colossus of New York. His latest novel, The Nickel Boys, published in July 2019, is a New York Times bestseller. He was named New York’s 11th State Author in 2018.

Mr. Whitehead’s reviews, essays, and fiction have appeared in a number of publications, such as the New York Times, The New Yorker, New York Magazine, Harper’s and Granta.

He has received a MacArthur Fellowship, A Guggenheim Fellowship, a Whiting Writers Award, the Dos Passos Prize, a fellowship at the Cullman Center for Scholars and Writers, and was a finalist for the Pulitzer Prize for John Henry Days.