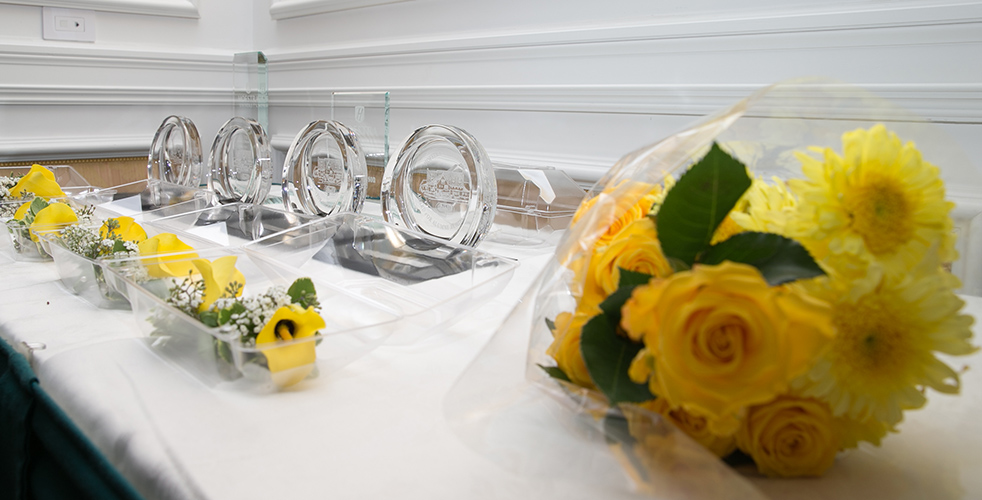 Nine distinguished members of the Hofstra community will be honored for exemplary career achievement and outstanding service to the university at the 2019 Alumni Awards Dinner on Thursday, September 26, at 6:30 p.m. at the Garden City Hotel. Business attire is suggested.

The awards include Alumnus of the Year, Honorary Alumnus, Alumni Achievement, and Young Alumnus.

For more information on tickets or sponsorship opportunities, visit hofstra.edu/alumniawardsdinner or contact Alex LaMagna, special events coordinator in the Office for Development and Alumni Affairs, at (516) 463-5284.

This year’s roster of honorees is:

ALUMNUS OF THE YEAR

As executive vice president of RXR Realty (“RXR”) and chief operating officer of RXR Development Services and RXR Construction Services, Joanne Minieri, CPA, oversees an over $3 billion development pipeline of 6,000 multifamily and condominium units along with approximately 2 million square feet of commercial space. Minieri serves on the board of Trinity Place Holdings Inc., Hofstra University, NEW (Nontraditional Employment of Women), and NYU Schack Institute of Real Estate. She co­chairs the annual National Symposium of Women in Real Estate on behalf of the Schack Institute of Real Estate and the NYU School of Professional Studies. Minieri is a member of the American Institute of Certified Public Accountants and the New York State Society of Certified Public Accountants.

Robert Goldberg, a former educator and administrator in the New York City and Oceanside school systems, is currently a partner in commercial and residential real estate ventures on Long Island. He became president of the Fay J. Lindner Foundation in 1991 and president of the Diane Goldberg Foundation shortly thereafter. Both foundations are dedicated to improving the quality of life for Long Island residents. Under Goldberg’s leadership, more than $40 million has been invested in capital projects and programs throughout Long Island. The Diane Lindner-Goldberg Child Care Institute, the Donald and Barbara Zucker School of Medicine at Hofstra/Northwell, and the Hofstra Northwell School of Graduate Nursing and Physician Assistant Studies are among the foundations’ most successful investments.

In his role as president of Merkle Americas, Craig Dempster oversees all aspects of Merkle’s North American operation, including sales, account management, solutions, services, and marketing. He is responsible for driving the P&L for Merkle Americas, representing more than 80% of the agency’s revenue and employee base. His team of more than 3,500 is charged with the core goal of delivering exceptional value for clients across the full spectrum of people-based marketing competencies, including performance media, customer experience, CRM, loyalty, and enterprise technology services. In addition, Dempster is responsible for the discovery, vetting, and management of acquisitions that support the strategic direction of Merkle Americas’ plan.

Professor Ellen T. Frisina founded the Hofstra chapter of Public Relations Student Society of America; has taught in study abroad programs in Italy, France, and Spain; and is most proud of the hundreds of careers she launched by creating a strong network of public relations professionals throughout the country. At Hofstra, Frisina served as chair of the University Senate Executive Committee, and has served on numerous committees in the Herbert School and at the University. She has done enormous community service as well, participating with the National Association of Mothers’ Centers, Philanthropic Educational Organization (PEO), Society of Professional Journalists, and Public Relations Society of America, among others. She is co-author of College Is Not 13th Grade – A Guide for Parents of College-Bound Students. In addition, her essays have been published in The New York Times, Newsday, PR Tactics, and dozens of books internationally.

As senior vice president and head of global marketing at Sony Interactive Entertainment, Eric Lempel leads teams across the globe managing PlayStation, one of the largest and most beloved entertainment brands in the world. Lempel is responsible for marketing and advertising for the entire portfolio of PlayStation products and services. He also leads the teams responsible for other marketing functions, including CRM, consumer insights, marketing technology, web, creative, events, design, brand alliances, promotions, and consumer support.

Lempel is currently the West Coast chair of the Dean’s Advisory Board for The Lawrence Herbert School of Communication.

Two-time Emmy and Golden Globe nominee Susan Sullivan starred for seven successful seasons as Martha, Nathan Fillion’s outrageously entertaining mother, on the hit ABC series Castle. She is currently appearing opposite Alan Arkin and Michael Douglas on the Golden Globe-winning Netflix/Chuck Lorre series The Kominsky Method. She recurs on the current Tim Allen reboot of Last Man Standing, and previously recurred alongside Martha Plimpton and Jay R. Ferguson on ABC’s The Real O’Neals. Sullivan is well known to television audiences for starring roles in long-running hits Dharma & Greg and Falcon Crest, and has made innumerable recurring and guest appearances on Two and a Half Men, The Nine, and Judging Amy,  to name a few. Sullivan also starred in numerous features and television movies, including My Best Friend’s Wedding, The Incredible Hulk, Midway, A Perfect Stranger, and the classic miniseries Rich Man, Poor Man.

Chris Wacker is a technology entrepreneur and CEO of Laserfiche, an elite provider of enterprise software for automating business processes and enabling digital transformation.

As CEO, Wacker sets Laserfiche’s strategic vision and drives business growth. With 30 years of industry experience, Wacker has a unique perspective on connecting inspiration and information, technology’s capabilities and the human touch. He is committed to leading a customer-centric organization —ensuring that every single user has an exceptional, distinctive experience.

Rondell Wescott has produced radio, print, and digital content to global television campaigns for various brands, including Dr. Scholl’s, Chobani, NBC Universal, ExxonMobil, and Gillette. Wescott was the producer for Gillette’s most controversial and talked-about ad to date, titled “We Believe,” which addressed the #MeToo Movement and toxic masculinity, among other issues. He also recently established the Rondell J. Wescott Endowed Scholarship at Hofstra University, to be awarded every year to one or more deserving students from socioeconomically disadvantaged backgrounds who are pursuing an undergraduate degree in television at The Lawrence Herbert School of Communication. Wescott is vice president of Hofstra’s Black/Hispanic Alumni Association and serves as parliamentarian/historian for the Hofstra University Alumni Organization.

Monte Desai has driven change in the public and private sectors. He is presently at Bain & Company, a leading management consulting firm that advises leaders of Fortune 500 companies and private equity investors on their most critical issues. Desai earned an MBA at Harvard Business School, where he focused on technology and emerging markets. At Hofstra, he was part of Honors College and earned a BS in Economics.