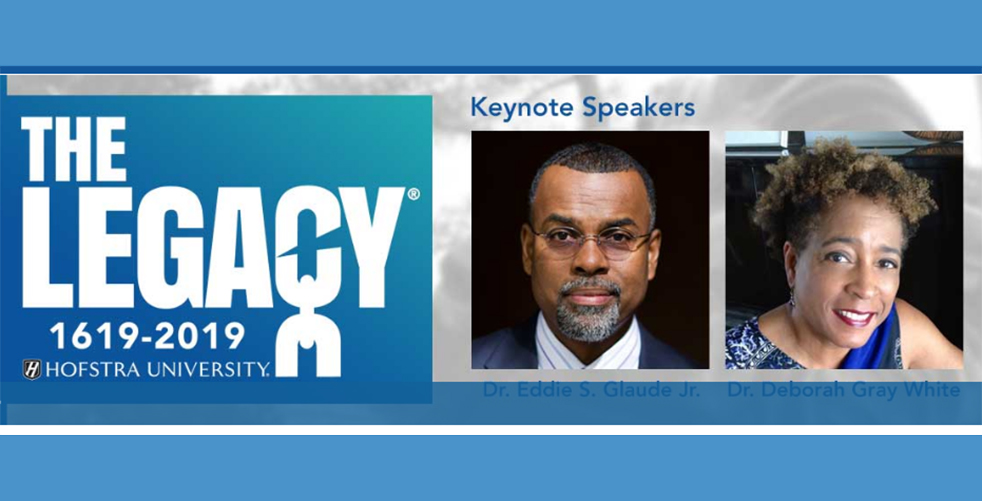 Hofstra University is commemorating the 400th anniversary of the arrival of the first enslaved Africans to North America and the ongoing experience of African Americans with a series of programming titled “The Legacy 1619-2019.” Events include historical reenactments, lectures, poetry readings, and panel discussions on a range of subjects that reflect the journey of African Americans over four centuries and the hopes of a people, past and present.

Unless otherwise noted, for more information on the events in this schedule, call the Hofstra Cultural Center at 516-463-5669.

Unheard Voices is an original monologue piece, with singing and drumming, by the award-winning writers of the American Slavery Project. Up to 30,000 men, women, and children from New York’s Colonial era are buried in the African Burial Ground in Lower Manhattan. Based on specific burials, each monologue gives one of them voice and honors those African descendants – enslaved and free – who were buried without their names.

This program is presented in collaboration with the Women’s Studies Program, the Hofstra Cultural Center, the Center for Civic Engagement, the Center for “Race,” Culture and Social Justice, and the NOAH Scholars Program.

African Burial Ground is the oldest and largest known excavated burial ground in North America for both free and enslaved Africans. It protects the historic role slavery played in building New York City.

Meet at the African Burial Ground, 290 Broadway, in lower Manhattan. Directions at https://www.nps.gov/afbg

Tour takes guests through historic Brooklyn Heights and examines the abolitionist movement. The program includes a visit to Plymouth Church.

The theme for the 2019 competition is Creating Wellness, focusing on improving health care and inspiring solutions that address healthcare inequity in underserved communities. This event showcases preselected businesses who have submitted applications and received mentorship. They will pitch their innovations to a panel of healthcare and entrepreneurship experts, all vying for more than $60,000 in cash and prizes.

The challenge connects participating businesses with these communities to test and develop their products.  Wizdom Powell, PhD, director of the Health Disparities Institute at UConn Health, will give the keynote address, titled “Breath, eyes, memory: Optimizing emotional well-being among boys and men of color.”

For more information or to register, please visit nyhealthchallenge.com or call Stacey Sikes, Executive Dean of Entrepreneurship and Business Development, at 516-463-7496.

Natasha Trethewey served two terms as the 19th poet laureate of the United States (2012-2014). She is the author of five poetry collections, including Native Guard (2006), for which she was awarded the Pulitzer Prize.  Her book of nonfiction, Beyond Katrina: A Meditation on the Mississippi Gulf Coast, was published in 2010. She is the recipient of fellowships from the National Endowment for the Arts, the Guggenheim Foundation, the Rockefeller Foundation, the Beinecke Rare Book & Manuscript Library at Yale, and the Bunting Fellowship Program of the Radcliffe Institute for Advanced Study at Harvard. Trethewey was inducted into the American Academy of Arts and Sciences in 2013.

Board of Governors Distinguished Professor of History, Rutgers University

Deborah Gray White is the author of Ar’n’t I A Woman? Female Slaves in the Plantation South (Norton, 1985), considered by many scholars to be a benchmark book about female slaves in the plantation South, their experiences with racism and sexism and the roles in the family and community. Professor White’s other monographs are Let My People Go: African-Americans, 1804-1860 (Oxford UP, 1996) and Too Heavy a Load: Black Women in Defense of Themselves, 1894-1994 (Norton, 1999). She received fellowships from the Guggenheim Foundation, the Woodrow Wilson International Center for Scholars Fellowship, the ACLS, the American Association of University Women, and the National Research Council / Ford Foundation.

Living on Long Island While Black: The Suburban Search for Justice

The documentary Strong Island explores the murder of William Ford Jr. through the eyes of his brother, Yance Ford, the Oscar-nominated director in the category of feature documentary (2018). The documentary looks at Long Island’s past through a detailed crime story, the legacy of trauma on one family, and its reverberating consequences.

The screening of Strong Island will be following by a panel discussion is co-moderated by Hofstra’s Martine Hackett, associate professor of health professions, and Nicole Franklin, assistant professor of radio, television, film. The panel also features Keith Bush, whose murder conviction was overturned in May 2019 after he spent 33 years in prison, and a Nassau County Civil Liberties Union representative.

Day of Dialogue: People On The Move: Conflict, Climate, and The Crisis of Forced Migration

1619-2019: The Quest for Reparatory Justice to Achieve More Perfect Union

With Dr. Ron Daniels, President of the Institute of the Black World 21st Century

This year marks the 400th anniversary of the arrival of the Dutch ship White Lion in Jamestown, in the British Colony that was to become the Commonwealth of Virginia, with “20 and odd Negroes” from Africa. The arrival of these enslaved Africans was the opening chapter in one of the most horrific tragedies in human history. In this presentation, Dr. Ron Daniels

will present a historic look at the centuries-old struggle for emancipation, and the current movement for reparations in the U.S. and its global implications. Dr. Daniels previously served as executive director of the National Rainbow Coalition in 1987, and deputy campaign manager for the Jesse Jackson for President Campaign in 1988. From 1993-2005, Dr. Daniels served as the first African American executive director of the Center for Constitutional Rights.

In collaboration with the Center for Civic Engagement, the Center for “Race,” Culture and Social Justice, the Latin American and Caribbean Studies Program, and the Hofstra Cultural Center.

Eddie S. Glaude Jr.’s most well-known books, Democracy in Black: How Race Still Enslaves the American Soul, and In a Shade of Blue: Pragmatism and the Politics of Black America, take a wide look at black communities and reveal complexities, vulnerabilities, and opportunities for hope.

He is chair of Princeton University’s Department of African American Studies, a program he first became involved with shaping as a doctoral candidate in Religion at Princeton. He is the current president of the American Academy of Religion. His books on religion and philosophy include African American Religion: A Very Short Introduction and Exodus! Religion, Race and Nation in Early 19th Century Black America, which was awarded the Modern Language Association’s William Sanders Scarborough Book Prize. Dr. Glaude is also the author of two edited volumes, and many influential articles about religion for academic journals. He has also written for the likes of The New York Times and The Huffington Post and is a regular MSNBC contributor.

Colson Whitehead is the author of Underground Railroad (an Oprah’s Book Club selection and recipient of the National Book Award and Pulitzer Prize). His latest novel, The Nickel Boys, was published in July 2019. Previous works include The Noble Hustle, Zone One, Sag Harbor, The Intuitionist, John Henry Days (a Pulitzer Prize finalist), Apex Hides the Hurt, and The Colossus of New York (a collection of essays). He was named New York’s 11th State Author in 2018. He is the recipient of a MacArthur Fellowship, a Guggenheim Fellowship, a Whiting Writers Award, the Dos Passos Prize for Literature, and a fellowship at the Cullman Center for Scholars and Writers. He has taught at many prestigious institutions around the country and has been a writer-in-residence at Vassar College, the University of Richmond, and the University of Wyoming.

Presented by the Center for “Race,” Culture and Social Justice

Wednesday and Thursday, November 20 and 21

Dr. Alain Lawo-Sukam, from Cameroon, is professor of Africana Studies and Hispanic Studies at Texas A&M University. A creative writer in three languages (French, English, and Spanish), he is the author of trilingual poetry books (Dream of Africa. Rêve d’Afrique. Sueño con África, 2013) and a novel (Mange-Mil y sus historias de tierra caliente, 2017). He specializes in the history and culture of Afro-descendants in the Americas, focusing in particular on Afro-Colombian, Afro-Cuban, and Afro-Argentine communities.


For information, please contact the Center for “Race,” Culture and Social Justice at 516-463-6585 or RaceCultureSocialJustice@hofstra.edu.

By the Virtue of the Blues

Tickets are $10, $8 for adults 65+. Members of the Hofstra community receive up to two free tickets upon presentation of a current HofstraCard. For tickets and information, please call the John Cranford Adams Playhouse Box Office at 516-463-6644, Monday-Friday, 11 a.m.-3:45 p.m., or visit hofstratickets.com.

Presented by the Office of Intercultural Engagement and Inclusion (IEI)

In collaboration with the Black Student Union, join us to learn about the Seven Principles of Kwanzaa, watch performances, and enjoy food and refreshments!