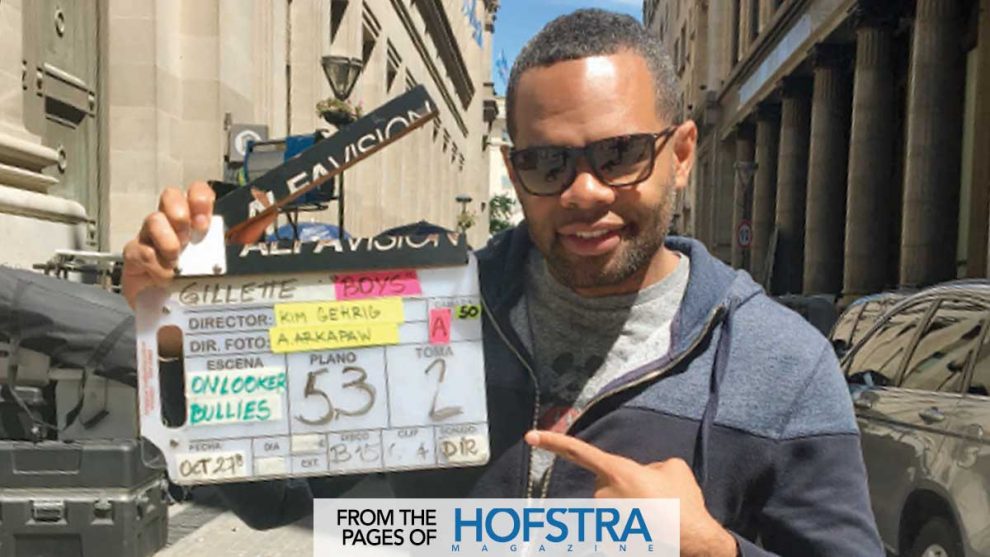 RONDELL WESCOTT WAS LEAVING A CROSSFIT CL ASS AT 7 A.M. WHEN THE FIRST TEXT ARRIVED.

“Your commercial made the morning news on GMA [Good Morning America].”

By the time he made it home and turned on the TV, messages were flooding in from excited colleagues. By 10 a.m., the commercial was trending nationwide on Twitter – barely 24 hours after it debuted on YouTube. Wescott took a deep breath as he realized that he’d reached a professional milestone.

“Well, a career goal of mine has been to produce a commercial that goes viral. That was accomplished as of yesterday,” he tweeted at 10:22 a.m. on January 15, 2019. The new ad, for razor company Gillette, sparked widespread reaction to its call to end “toxic masculinity” in the #MeToo era.
Speaking out against a “boys will be boys” mentality, the commercial drew both high praise and harsh criticism for its updated take on the brand’s 30-year-old tagline, “The best a man can get.”

Many supported the ad’s progressive vision, while others perceived it as male-bashing. More than a dozen celebrities and thought leaders – from Bernice King, Chrissy Teigen, Maria Shriver, and Arianna Huffington to Piers Morgan and Meghan McCain – chimed in about the ad.

“When I first saw the script, I knew that it was going to cause conversation,” said Wescott, a TV/video production alum of The Lawrence Herbert School of Communication. “But that was the intention; we wanted men to look at what was happening in society and ask whether this was the best we could be.”

“It’s really about self-reflection,” he said, “and what men can do to help other men and boys so that the next generation benefits.”

The project began in early 2018 as the creative team at Grey New York, Gillette’s advertising agency, worked for eight months to settle on a concept and finalize the script. Then Wescott stepped in to bring that vision to life. As vice president and integrated producer for Townhouse, the production agency that collaborates with Grey, he led a three-month effort to find a director, cast the commercial, shoot it, and complete postproduction.

It was a huge undertaking. Three weeks of casting in three countries. Fifty-six principal actors and 75 extras. A four-day shoot in Buenos Aires, Argentina, and a month of intense editing.

The result: a one-minute, 48-second short film titled We Believe that took on bullying and sexual harassment, two of the country’s biggest hot-button cultural issues. Gillette also announced plans to donate $1 million annually for the next three years to nonprofits that help boys and men achieve their personal best.

“Without a doubt, this was the single most challenging production of my career; not one thing about it was easy,” said Wescott, who has produced other ads for Gillette, as well as for national brands such as ExxonMobil, Chobani, and Avis. “It was a huge group effort, and I’m so proud of the work we did and what it stands for.”

He has been overwhelmed by the film’s reach, which includes a combined 66 million+ views on YouTube, Twitter, and Facebook and more than 3,000 global media mentions. At its peak, the ad was the No. 1 trending topic on Twitter nationally, and Gillette was the third-highest search term on Google in the United States within a day of its launch.

Growing up in Philadelphia, Wescott’s interest in television and production work began in middle school as a fan of HBO First Look, which offered behind-the-scenes views of upcoming feature films. “I still remember watching an episode on Last Action Hero with Arnold Schwarzenegger, and seeing them use a green screen, and being really interested in and excited about how that worked.”

At Hofstra, he spent long hours building sets for shows and learning camera techniques and was among the class of students that produced the very first Thursday Nite Live televised sketch comedy show. He even found time to sing tenor in the Hofstra Gospel Ensemble.

He is what we could only hope our graduates turn out to be: talented,
respected, accomplished, a person who is a member of a greater community and who gives back. One terrific person.”Peter Gershon

“Those five are what I’d call gems,” said Wescott, who now lives in Brooklyn and plans to one day open his own company, named DellCott Productions. “They were my television professors from freshman to senior year and taught me all of the production knowledge that I’ve brought with me into the real world. I would definitely attribute my success to what I learned at Hofstra.”

Peter Gershon was in California accompanying students on the annual Hofstra in LA networking trip when the Gillette ad went viral. Among the group’s visits were the NBC News studios, where they met Alicia Hastey ‘14, an associate producer who was working on a story about the Gillette
commercial for NBC Nightly News with Lester Holt.

“The Herbert School dean, the associate dean, and I were so proud to be at our annual reception and to announce to a room of 70 West Coast alumni, parents, prospective students, and our own current students that it was a graduate of our program whose work had gone viral,” Gershon said.

Since graduating, Wescott has returned several times to talk with students and has donated tools such as an animatic storyboard that he used on a past campaign. He is also serving as the current vice president of the Black/Hispanic Alumni Association and as historian/parliamentarian of the Hofstra Alumni Organization.

“He is what we could only hope our graduates turn out to be: talented, respected, accomplished,” Gershon said, “a person who is a member of a greater community and who gives back. One terrific person.” 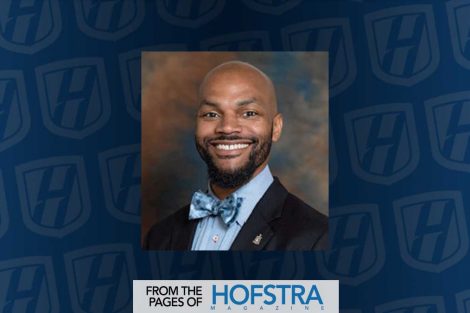 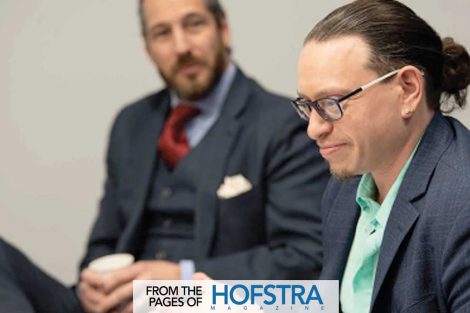 Aspiring Minds
A Legacy of Service