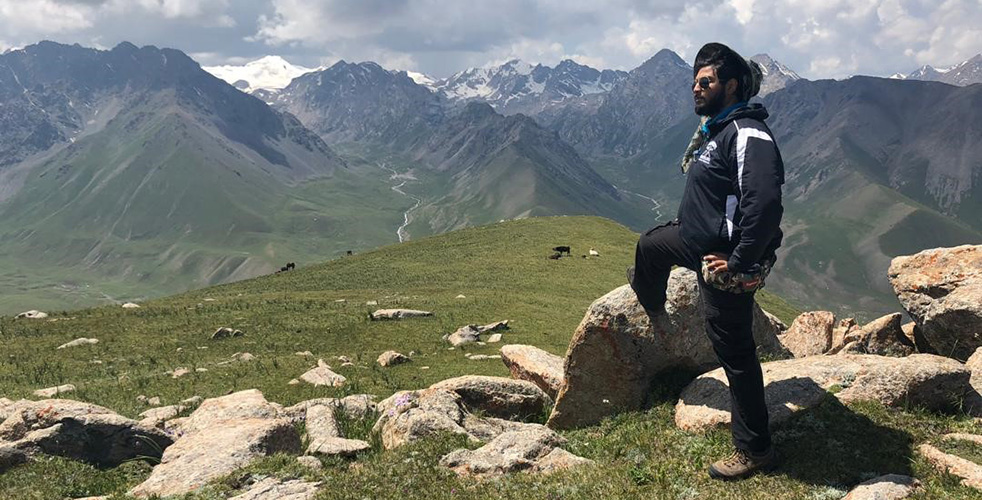 After five weeks in Kyrgyzstan, Gurkamal Dadra ’21 returned to Hofstra with the confidence that he is more resilient, determined, and resourceful than he ever knew.

Thanks to the Congressionally-funded Benjamin A. Gilman International Scholarship, Dadra studied in the Central Asian country earlier this summer, where he took classes in forensic anthropology and researched the resurgence of Islam in the region. While there, Dadra navigated a language and culture he was unfamiliar with and embarked on a mountain journey that removed him from all modern conveniences.

The Gilman Program provides scholarships to outstanding undergraduate Pell Grant recipients who, due to financial constraints, might not otherwise study abroad.  Dadra was one of 844 undergraduate students from 335 colleges and universities across the United States to receive the prestigious award this year. He is thankful for the help and support he received from former Vice Provost and Fellowships Advisor Neil Donahue and Assistant Provost for Study Abroad Maria Fixell who worked closely with him on his application and helped him prepare for his time abroad.

Dadra, an anthropology major and religion minor, is a first-generation American from Bellmore, NY, who is fluent in Hindi and Punjabi and can converse in French, Urdu and Spanish.

Despite his fluency in other languages, Dadra initially found himself out of sorts in Kyrgyzstan, where he needed to learn elementary Russian and Kyrgyz. “It was interesting to go someplace where no one spoke English,” he said. “I was able to pick up bits and pieces of the languages quickly enough to order in a restaurant, ask directions and make polite conversation.”

The capital city of Bishkek was Dadra’s home base. A typical day began with a morning workout at the gym. “It was so hygienic – more so than here,” Dadra explains. “Guests have to change into a clean pair of shoes to work out. You can’t wear the same shoes in the gym that you wore in the street.” On his way back to the student dormitory, Dadra shopped for breakfast ingredients – “fruit, an egg … people eat everything fresh. Even milk – it’s good for two or three days, so it only makes sense to buy enough food for one or two meals at a time.”

Dadra spent the next two or three hours of each day in his forensic anthropology class. Following a break for lunch, students used their afternoons for touring museums, sightseeing and hiking in the mountains.

A highlight for Dadra was a weeklong horse trek that he experienced with four other students. “The city was like a heat box. Being in the mountains and breathing in fresh, cool air was such a relief,” he says.

Riding horseback was a brand new skill for Dadra and an activity that he now misses. “It was so much fun traveling by horse and playing traditional nomadic games. One day we asked if we could take the packs off the horse and just gallop and race around.” He even learned how to play a variation of Kok Boru – a Kyrgyz game that in its most traditional form is played with a headless goat carcass.

During periods of downtime on the trek, Dadra did not miss texting or posting to social media. “I loved not having access to technology. That one week without it was fantastic.” Once they were back within the city limits, “connectivity was great and really cheap,” he says.

As part of research for his senior thesis, Dadra visited many mosques in Kyrgyzstan. “While the country was part of the Soviet Union the practice of Islam was suppressed,” Dadra explains. “When the curtain was lifted, the religion experienced a resurgence. Religion has become more a part of the cultural identity.”

Beyond the structured learning he expected, Dadra found his time in Kyrgyzstan to be one of self-discovery. “I’m a lot more durable than I thought I was,” he says. “I spent more than a month in a foreign country where I had to learn a new alphabet and language. I learned horseback riding and traveled through the mountains, without the comforts of electricity or running water. At times, I was without technology and didn’t miss it. It was an empowering experience.”

Dadra is already planning his return to Central Asia. “I hope to apply for a Fulbright,” he says. “I also feel certain that my career will involve some aspect of international affairs in the region.”

More information on the Gilman International Scholarship and other programs is available on Hofstra’s Scholarship Nexus.