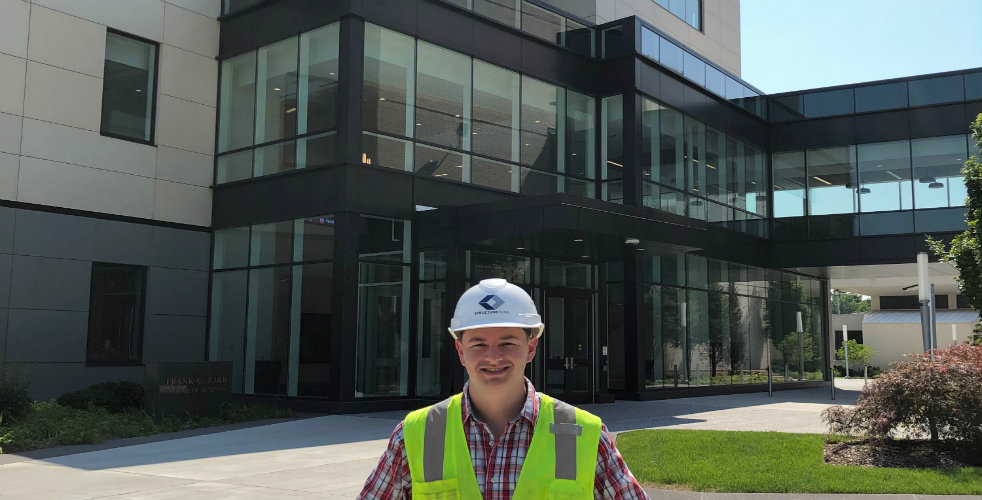 Hands-on learning is one of the cornerstones of a Hofstra education and the construction of the new, state-of-the art building for the Frank G. Zarb School of Business was no exception. Just ask Darren Schwartz ’19, a civil engineering major who worked on the new building as part of his co-op experience with StructureTone, the contractor on the business school project.

“I was excited to get the offer from StructureTone,” Schwartz said, “but even more excited to work on the new business building and help create something that I’d get to see every day on campus.”

On the first day, he arrived on-site to a large plot of open land and exposed beams next to C.V. Starr Hall. His internship office was a trailer parked outside the Career Center. Over a two-week orientation, he became fully immersed in all the ins and outs of the project.

“When I got there, the outside of the building wasn’t even closed in. About three quarters of the exterior façade was done. Inside was essentially a skeleton. All of the walls had been framed out with metal studs, but there was no sheet rock so from one end of the building you could see straight through to the other side.”

Schwartz always knew he wanted to build things. As a child, his favorite pastime was constructing (and deconstructing) Lego (include copyright symbol) towers.

“I was always interested in seeing how things worked behind-the-scenes so to speak,” he said. “I decided to pursue engineering because it combined my two greatest interests: construction and math.”

“When I came to Hofstra, I was immediately drawn to the Engineering program. I took Dr. Caputi’s introductory course and knew this was the major for me. He had a genuine care for us as his students and it seemed like there were a variety of opportunities at Hofstra. I knew I could do anything here.”

The Fred DeMatteis School of Engineering and Applied Science co-op program connects students with paid positions in their desired career.

Little did Schwartz know that he wouldn’t even have to leave campus for his co-op experience.

Schwartz started off working on rotational assignments that included everything from processing contracts and trades with contractors like plumbers and electricians to overseeing design challenges.

After a few months, Schwartz – the only student on the job – took on more leadership roles. He met with Richard Leddy, Hofstra’s assistant vice president of new construction, engineering and central utilities and Cheryl Neubauer, the assistant project manager, daily to discuss the building’s progress.

“We would have weekly meetings with the StructureTone team, the Hofstra team, architects and engineers,” Schwartz said. “At one point about five months into my internship, my boss asked me to run the foremen’s meeting. I became comfortable leading others and managing moving parts. I really enjoyed it and was able to get a management perspective versus just the entry-level employee’s perspective.”

And when the building was nearing completion and it was time to furnish it, Schwartz worked closely with the business school’s dean, Dr. Janet Lenaghan, and other administrators and faculty to design the layout of their offices.

“It was fun to talk with them about their ideas and their own personal touches on the spaces,” he said.
In January, the Frank G. Zarb School of Business settled into its new home, a 52,000 square foot building with state-of-the-art features, including a Behavioral Research in Business Lab, a new Center for Entrepreneurship, start-up incubator and designated spaces for student clubs.

“It’s really cool to see it done!” Schwartz said. “When you’re there every day and you see what challenges you had to account for, it gives you a unique appreciation for each aspect of the building. Especially the small things, like the garage doors in the start-up incubator or the wood wall that the TVs are mounted on in the lobby.”

“I get Snapchat and text messages every day from friends saying, ‘Hey! We’re in your building…’ It’s weird to say, but I feel kind of protective of it. If I see a mark on the wall, it’s as though someone dinged your car. I’m thinking, ‘Hey, who messed up my wall?!’”

Schwartz and his friends enjoy spending time in the new building and checking out the different amenities.

“The building’s not just for business students,” he said. “One of my favorite things during construction was going to Einstein Bagels in C.V. Starr every morning for coffee. They got to know me there and now I stop by to say hello whenever I’m around.”

After graduation in December, he plans to pursue a master’s degree in engineering, or possibly an MBA, while working with a construction firm in New York City.

“I think the co-op program and my internship with StructureTone gave me a new level of confidence and maturity,” he said. “The best thing this experience did for me was improve my leadership skills, and working on the new building was definitely the highlight of my Hofstra career.”