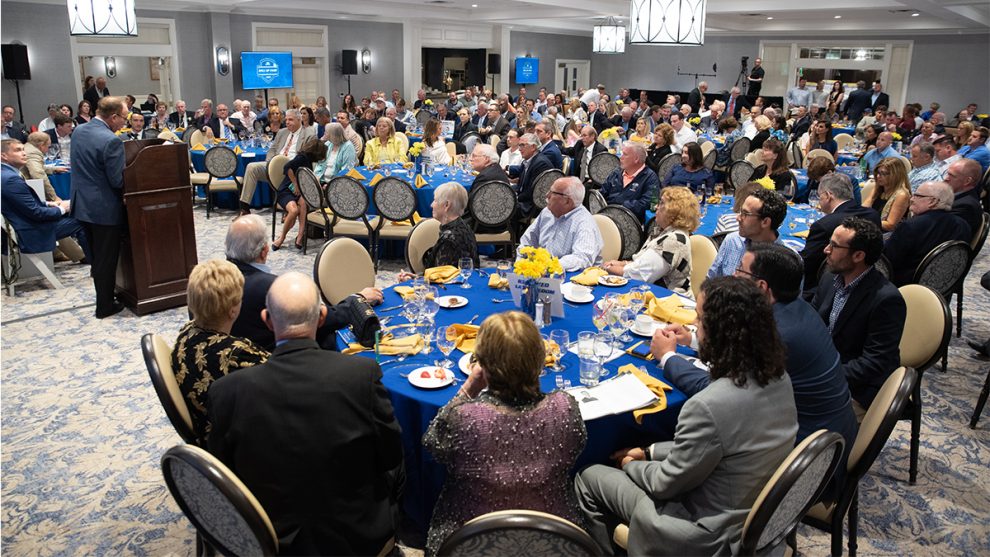 The Hofstra University Department of Athletics held its 2019 Hall of Fame Induction and Golf Outing, presented by Bob McKeon ’53 and Cathy McKeon, in June at the Huntington Crescent Club.

In addition to the Hall of Fame inductees, the Hofstra Athletics Pride Club presented a pair of awards to two dedicated supporters of Hofstra Athletics. Ken Tyler was the recipient of the Jack Lenz Award, while Terry Ryan received the Joseph M. Margiotta Distinguished Service Award.

The event was a great success with a sold-out crowd for the induction ceremony, 149 golfers and more than $130,000 raised to support Hofstra Athletics.

“The Hall of Fame Induction and Golf Outing was a great day for Hofstra Athletics,” commented Hofstra Director of Athletics Rick Cole Jr. “From beginning the day with a round of golf on an outstanding course to closing with the Hall of Fame and listening to the heartfelt speeches of the inductees, it was truly a tremendous event from start to finish.”

As well as the Hall of Fame inductions and the Pride Club Awards, there were several golf awards presented. The winning foursome with a team score of 60 was Larry Horl, Rod Cooney, Michael Alleva, and Rudy Caroleo. Emily Corzel had the longest drive of the day for the women, while Jimmy Cottone was the men’s longest drive winner. J.R. Balzarini (third hole), Rocco Guglelmo (sixth hole), Kevin Coghill (13th hole), and Kevin Ferrari (17th hole) were the closest to the pin winners with Guglelmo recording a hole in one.

Hofstra University Creates Programs in Collaboration with Marques Colston ‘06
“It all started with a jersey.”