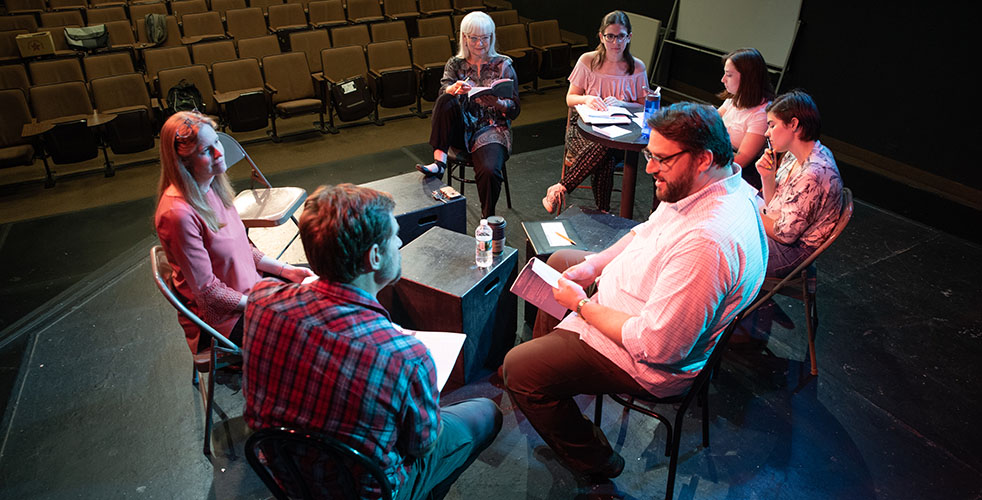 For an off-Broadway revival of Madeleine George’s relationship comedy The (curious case of the) Watson Intelligence, director Jean Dobie Giebel has assembled a cast and creative team that is brimming with Hofstra drama talent. The play will premiere at the alumni-founded Chain Theatre for a limited run, Wednesday through Sunday, July 10-14.

Recent alumni and a student have starring roles behind the scenes. They include lighting and sound designer Max Cerci ’17, stage manager Maggie Latham ‘19, assistant director Ashley Brooke Miller ’19, and costume designer Katelyn Quinones ‘21. Giebel, a professor of drama and associate dean for curriculum and personnel, says, “Whenever possible I want to help Hofstra students and graduates get New York theater credits. And our students are just so capable. Maggie Latham only just graduated, and she already has her Equity card.”

“The play is about relationships and how technology can help and get in the way of connecting with others,” says Giebel.

The four Watsons in the show include the trusty sidekick to Sherlock Holmes; the loyal engineer who built Alexander Graham Bell’s first telephone; the unstoppable super-computer that became a Jeopardy! champion; and a present-day techno-dweeb who is looking for love.

Giebel discovered the work when she was looking for material to teach in class. “I found the writing so engaging, and I’ve always been drawn to works that play with time and space.

“This is a play with a lot of language. The dialogue is intelligent and interesting. It’s political without being partisan. It’s funny and heartwarming. It just has everything.”

The three-member cast features Assistant Professor of Drama Christopher Dippel, Claire Engel – both of whom Giebel has directed before – and Peter Friedrich, a drama professor from Millsaps College who she met at the National Association for Theatre in Higher Education.

“I’d been looking for a project to do with Claire and Chris for a while. Then I met Peter,” says Giebel. “I brought the three of them together for dinner at my home and approached them about doing the play. They all said yes pretty quickly.”

THE SHOW MUST GO ON!

When the lights went out in the middle of the Saturday night performance of The (curious case of the) Watson Intelligence, the audience came to the rescue. On July 13, midtown Manhattan was hit with a five-hour blackout, right before the final scene of Act I. The audience jumped into action, using the lights from their cellphones to illuminate the stage so Christopher Dippel could deliver his monologue before the intermission.

During intermission, it was uncertain if the play should proceed, but the audience continued to light the stage with their phones using portable chargers. The stage manager came down from the booth with her laptop and ran sound cues sitting next to the stage. It was an extraordinary team effort. And so, a play about relationships and technology had the happiest of endings thanks to people who love their theater and their personal tech. Photo by Roger Gonzalez

Watson Intelligence originally premiered at Playwrights Horizons in 2013 and went on to be a finalist for the 2014 Pulitzer Prize in Drama and the winner of the 2014 Outer Critics Circle John Gassner Memorial Playwriting Award.

The Chain Theatre, led by artistic director Kirk Gostkowski ’05, has a reputation for providing opportunities for emerging artists and underrepresented voices in New York’s arts community. In addition to its plays, the Chain houses a thriving playwriting lab and international film festival.

The Chain Theatre is located at 312 W 36th Street, fourth floor. Tickets for The (curious case of the) Watson Intelligence are $25, $15 for students and senior citizens with ID. Show times are July 10-13 at 8 p.m. and July 14 at 2 p.m. For more information, visit chaintheatre.org or their online box office.