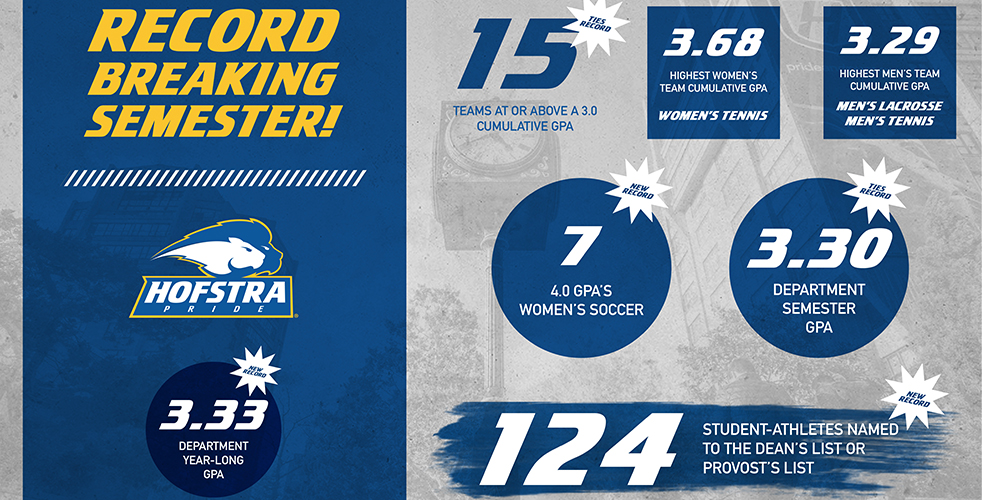 Hofstra University student-athletes continue to perform outstanding academic achievement, as the Pride once again tied the school-record with a 3.30 grade point average during the recently completely 2019 spring semester.

The 3.30 grade point average ties the mark originally established during the 2016 fall semester and tied this past fall. It is also the 14th consecutive semester that Hofstra student-athletes have compiled an average GPA of at least a 3.00.

“This continued excellent academic performance showcases the effort and priority our student-athletes and staff put towards their scholarly endeavors,” commented Hofstra Director of Athletics Rick Cole Jr. “Our student-athletes, coaches, and staff strive for excellence in the classroom, on their respective fields of play and in the community and we couldn’t be prouder of their continued success. The Hofstra community applauds all of our student-athletes on their remarkable work in the classroom. As always, a special thank you to our academic advising staff for their dedicated work in this area.”

The women’s tennis team continued its stellar showing in the classroom with a 3.68 spring GPA to lead all Pride teams. On the men’s side, a pair of teams tied for the top spot as the men’s lacrosse team and men’s tennis teams both compiled 3.29 GPAs during the spring semester.

The Hofstra student-athletes currently have a spectacular 3.31 GPA as a group comprising their entire Hofstra academic careers.

Hofstra student-athletes have very diverse majors and are students in a multitude of schools within the University. Of the 335 Pride student-athletes, 136 are in the Frank G. Zarb School of Business, 101 are in the Hofstra College of Liberal Arts & Sciences, 47 in the School of Health Professions & Human Services, 19 in the Lawrence Herbert School of Communication, nine in the Fred DeMatteis School of Engineering & Applied Science and two in the Hofstra Northwell School of Graduate Nursing and Physician Assistant Studies.

Music To Our Ears; From Pride To Jazz
Pride Hoops Adds New Leader