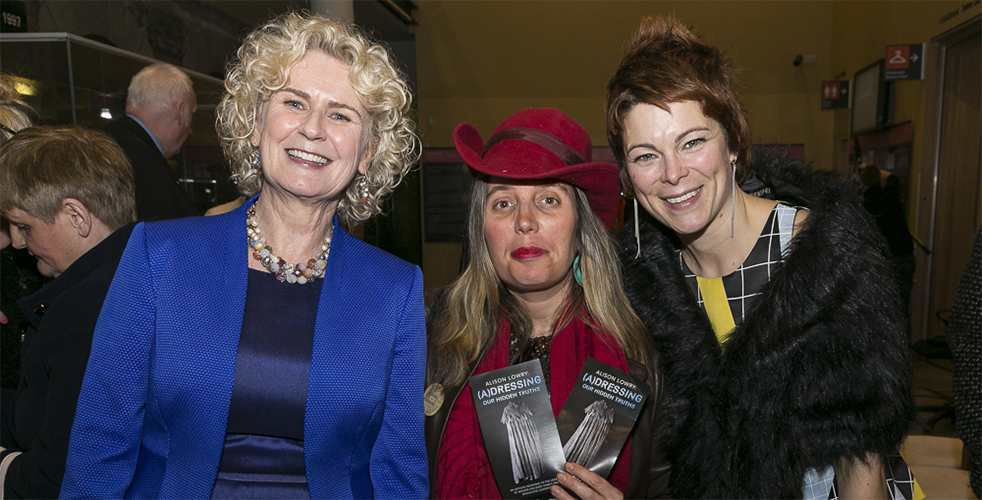 Poems and commentary by Adjunct Assistant Professor of English Connie Roberts have been incorporated into glass artist Alison Lowry’s exhibition, (A)Dressing Our Hidden Truths, an artistic response to the legacy of the Mother and Baby Homes, Magdalene Laundries and Industrial Schools in Ireland. These church-run institutions operated as orphanages and homes for unmarried women and their children. The exhibition is on display at the National Museum of Ireland, Dublin, through May 2020. Professor Roberts spent much of her childhood in an industrial school, and her traumatic experiences there inspired her award-winning poetry collection, Little Witness.

Professor Roberts attended the opening of the exhibit in March, where she read excerpts from her poetry.

Lowry is known for creating glass art to open conversation on topics about child abuse and domestic violence. Among the highlights of (A)Dressing Our Hidden Truths is an installation of nine christening robes in pâte de verre (glass paste) spread across two rooms. Audio testimony in poetry and song by Roberts and other survivors of the industrial school system and Magdalene Laundries are an important component of the exhibition.

Lowry and Professor Roberts met last fall at the conference “Towards Transitional Justice: Recognition, Truth-telling, and Institutional Abuse in Ireland,” held at Boston College. The event brought together scholars, survivors, and activists in the international field of Transitional Justice, with a specific focus on the Irish state’s response to the nation’s history of institutional abuse.

One of Lowry’s works, “The Cardigan,” is a response to Roberts’ poem of the same name. The poem recollects a sweater Roberts wore as a 4-year-old child before being admitted to the industrial school. Her mother held onto the cardigan and kept it in a suitcase on top of her wardrobe. After her mother’s death, Roberts’ father gave the cardigan to her. Lines from Roberts’ poem are overlaid on the glass cast over the sweater.

Another of Roberts’ poems, “My People”, is also part of the exhibition. This poem is a response to an Irish public official’s remarks in the media about institutional abuse survivors as “damaged people”.