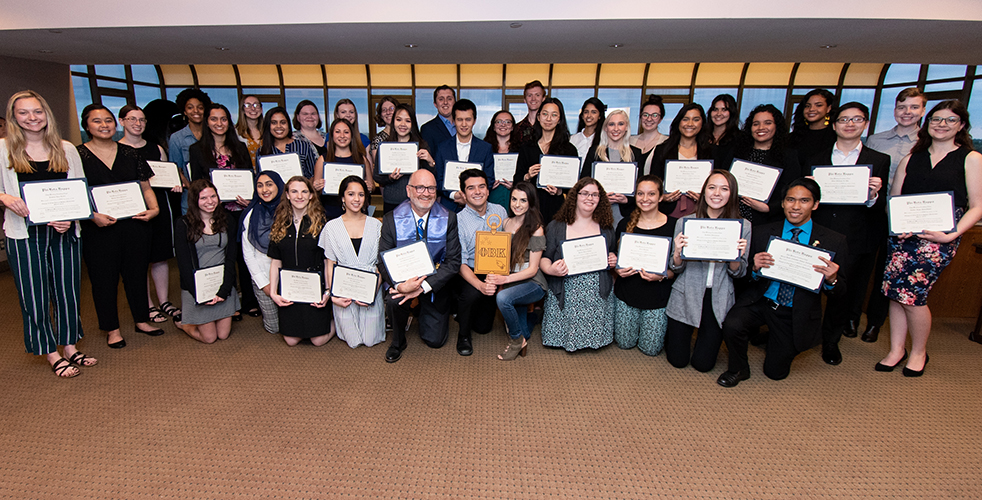 Phi Beta Kappa is considered America’s most prestigious honor society, with the top 10 percent of liberal arts and science graduates invited to join.

This spring’s Hofstra inductees came from the classes of 2018, 2019 and 2020. To be considered for election, a student must attain a high GPA while taking broad and rigorous coursework in the liberal arts and sciences. There is no fixed GPA required, nor is a high GPA alone sufficient for election. In making its decision, the chapter examines a student’s entire transcript.

Catherine Matteson ’18 received the Phi Beta Kappa Endowed Graduate Scholarship. She graduated in December with an Anthropology major and minors in Drama and German. In Fall 2019 she will enter an MA program in Museum Anthropology, offered jointly by the Columbia University Department of Anthropology and the American Museum of Natural History.

Kirsten Rickershauser ’19, an English major with minors in Fine Arts and Classics, received Hofstra’s Helene Waysek Award for study in the classics. In addition to completing her required courses, Rickershauser studied advanced Latin, comparative literature, religion and psychology. This award is named for Dr. Waysek, a Phi Beta Kappa graduate of Douglass College, who was an active member of the Hofstra faculty for 36 years. She was coordinator of the University Honors Program (the predecessor of the current Honors College) and secretary of the Hofstra Phi Beta Kappa chapter.

Dr. Neil Donahue, was elected to honorary membership to Phi Beta Kappa. Dr. Donahue has taught at Hofstra University in the Department of Comparative Literature and Languages since 1988, and served as Associate Dean of Honors College from 2007-2016. He most recently served in the Provost’s Office as Vice Provost for Undergraduate Academic Affairs and Internationalization. Dr. Donahue has received grants from the German Academic Exchange Service (DAAD), the National Endowment for the Humanities (NEH), the Fulbright Program and the Alexander von Humboldt Foundation. In addition to numerous articles and reviews, Dr. Donahue is the author or editor of seven books, with monographs on 20th-Century German poetry and prose fiction. He is the editor of the Camden House Companion to the Literature of German Expressionism (2005). In January 2018 he was Scholar-in-Residence at the Robert Gore Rifkind Center for German Expressionist Studies at the Los Angeles County Museum of Art.

Courtney Selby was honored for her service as president of Hofstra’s Phi Beta Kappa Chapter. Selby served as associate dean for information services, director of the law library and professor at the Maurice A. Deane School of Law before leaving Hofstra earlier this spring to take a position at St. John’s University School of Law. She received a Phi Beta Kappa stole and pen.

According to the Phi Beta Kappa web site, five students at the College of William and Mary founded Phi Beta Kappa in 1776, during the American Revolution. For more than two and a quarter centuries, the Society has embraced the principles of freedom of inquiry and liberty of thought and expression. Laptops have replaced quill pens, but these ideas, symbolized on Phi Beta Kappa’s distinctive gold key, still lay the foundations of personal freedom, scientific inquiry, liberty of conscience and creative endeavor.

Only about 10 percent of the nation’s institutions of higher learning have Phi Beta Kappa chapters.