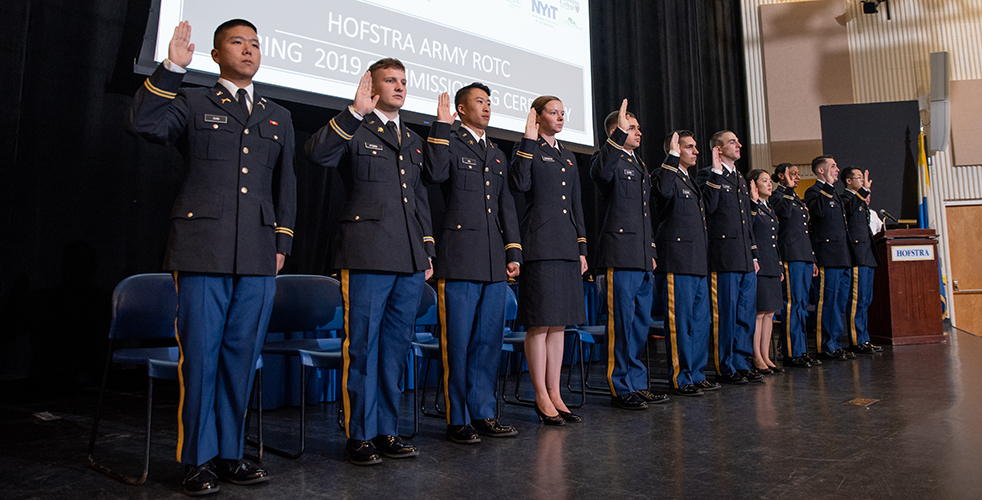 Eleven seniors, including two Hofstra students, were commissioned as officers in the grade of Second Lieutenant (2LT) in the United States Army when Hofstra University’s Military Science Department celebrated its Spring 2019 Commissioning Ceremony at The Helene Fortunoff Theater in Monroe Lecture Center.  Hofstra is a host university for the Senior Army ROTC Program on Long Island and for some additional area institutions.

The ROTC Cadets participated in moving traditions, including the Silver Dollar Salute symbolizing an officer’s first salute and having their 2LT rank fastened on their uniform by spouses, parents and other family members.

“Today is the day when your life will undergo a transformation,” Major General Higgins said to the cadets. “You take that first step from what your life was to what it will be. You become a commissioned officer in the United States Army, and by doing so become something completely new.  Now, you are no longer just responsible for yourself, your grades, and your class standing. Now you have the responsibility, the authority and the requirement to lead soldiers. You will be responsible for the very lives of America’s sons and daughters. Just how awesome a responsibility is that?”

This year’s commissionees include:

Major General Higgins concluded his remarks by advising the cadets to read the US Constitution “from cover to cover – the document you are about to swear an oath to.” He also shared that “Thirty-nine years ago I was sitting where you are now, and it seems like yesterday because my time here at Hofstra University is one I will never forget – and neither will you.

As you pursue your destiny by your patriotic decision to serve this great nation, I wish you every success.  And remember this:  whatever fate has in store for you – this is not about the destination – it’s about the journey.  I want you to make that journey a memorable one, and make America proud!”

DMG or Distinguished Military Graduate is an honor bestowed to undergraduates who rank in the top 20 percent of Army ROTC graduates nationwide.