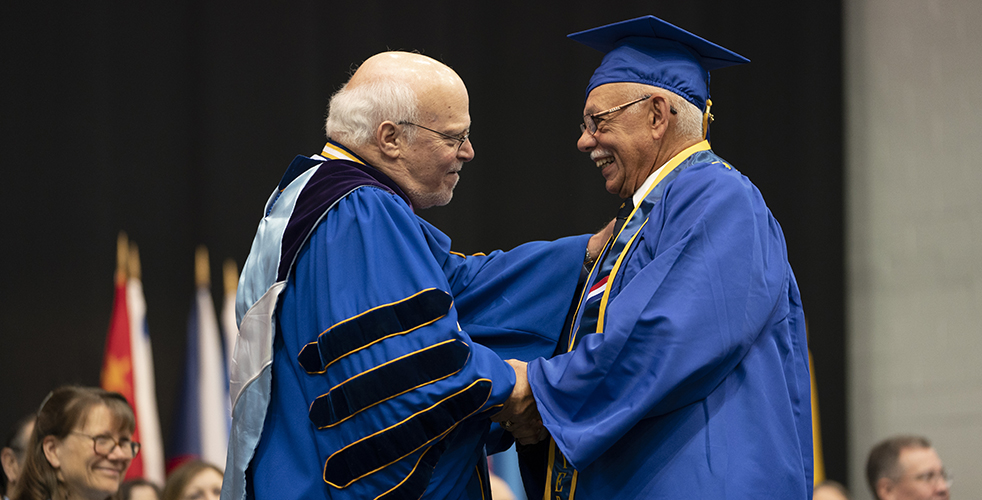 The Sarasota Herald-Tribune and WWSB-TV (ABC affiliate) covered the inspirational story of Anthony Rondello, 73, who graduated from Hofstra on May 19 with his BA in sociology. Rondello began his studies at Hofstra in 1963, but he withdrew to join the Army. He subsequently married his college sweetheart, Joanne Fiorenza (Hofstra Class of 1969), and went on to a successful decades-long career in federal government. The fact that he fell short of earning his degree was something he always meant to revisit.

Approximately three years ago, Rondello, a widower who lives in Venice, Florida, went back to the books. Encouraged by his children, he consulted with Hofstra’s S. Stavros Valenti, Senior Associate Dean for Student Academic Affairs, and the Chair of the Sociology Department, Dr. William Mangino. Dr. Mangino said, “I reviewed his transcript from 1967, which was a paper document that had to be retrieved from Hofstra’s Archives. We learned he was only a few credits short of earning his degree.”

Hofstra worked out a plan so that Rondello could take two of the required courses at an accredited institution in Florida. He took the third course, SOC 191 “An Advanced Seminar in Sociology” with Hofstra. Rondello wrote his senior paper on “Ageism in America” under the guidance of Professor William Lopresti with whom he met several times in person and talked to and emailed regularly.

After earning an “A” in that capstone course in December 2018, Rondello was notified he was officially a Hofstra graduate. He walked in Sunday’s 9 a.m. ceremony to the cheers of his children and grandchildren in the stands.