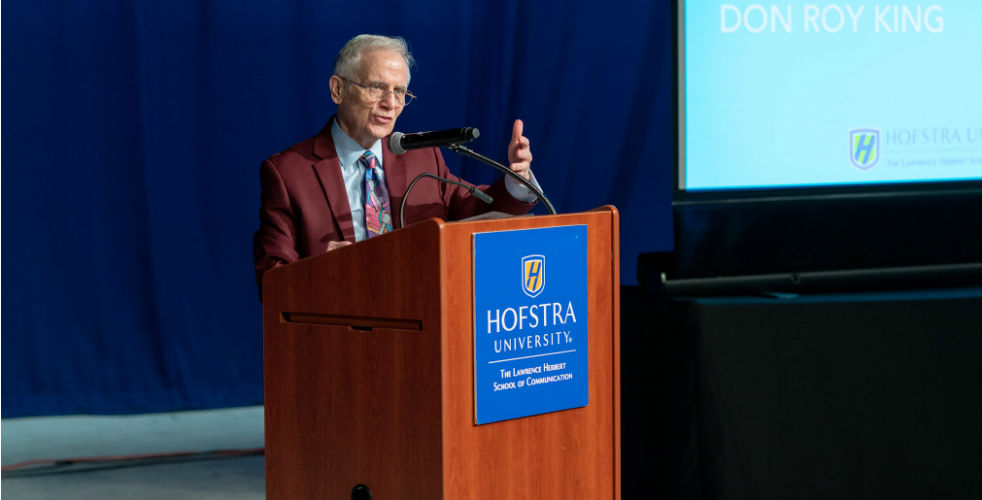 Saturday Night Live director Don Roy King recently visited the Lawrence Herbert School of Communication to talk with students about working on one of the most popular sketch-comedy shows in television history.

The event opened with an AARP video highlighting how King began working on the iconic show later in his career. He then came to the podium to tell tales, crack a few jokes, and explore the various fallacies that students may have when working towards their dream careers.

“What comes first is not your ideas and your vision, but your work ethic. That means very simply: you show up on time, you do what you’re asked to do, you do the best you can do, you work to do more, and you don’t complain,” said King, who visited the Herbert School at the invitation of professor and fellow Directors Guild of America (DGA) member Dennis Mazzocco. “That’s simple work ethic, and that applies to all of us in all positions. The ones who are there to do the best job are the ones I respect the most.”

King boasts an impressive career that has earned him ten Emmy Awards and five DGA awards. After graduating from Penn State University with a BA in Communications in 1969, he worked on Entertainment Tonight and directed 14 seasons of CBS News, six years of Good Morning America, and four live finales of Survivor.  He then took what he calls a “left turn” to SNL, which he has directed for the past 13 seasons.

“Don Roy King gave a lot of insight into SNL and it was interesting to hear how it functions from his perspective as the director,” said Caroline Lea ’20, a video/television major who attended the event, held in the Herbert School’s Studio A on April 22nd.  “For students like myself who aspire to work in live television and be a director, he also gave some great advice on working up to where you want to be in the industry from smaller shows to the larger, more well-known shows.”

A lifelong learner, King said he took improvisation classes at the Upright Citizens Brigade Theatre as he first stepped into his role at SNL. He encouraged students to continue their education and take advantage of Hofstra’s liberal arts foundation.

“Fallacy number three: ‘it’s not what you know, it’s who you know.’ I believe that over time, opportunities come out and you will get your chance, doors will open for you,” said King. “What counts is what you know, not who you know. When that door opens up, it’s your set of skills that will count. That journey starts right where you are.”

This advice and the rest of his discussion was followed by questions from students, faculty, and staff in the audience. With a full house and lots of laughter, Don Roy King, live from Hofstra University, was a hit.

See photos from the event, and watch: