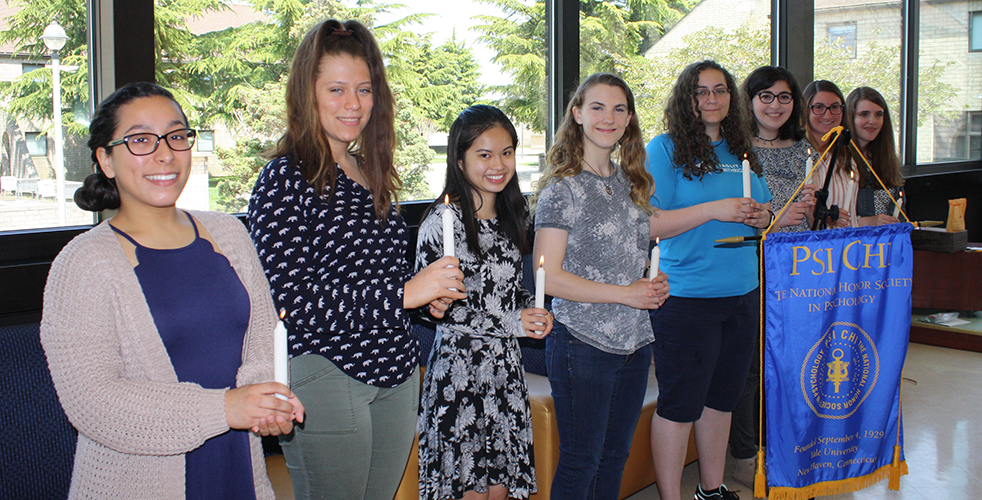 Nine students were recently inducted into the Psi Chi, the international honor society for psychology, and two were awarded the annual Allison Kim Levy Continuing Acts of Kindness Endowed Memorial Award for their work in the community.

Psi Chi is the largest student psychological organization, with more than three-quarters of a million members in 1,130 chapters across the U.S. and international chapters from Canada to New Zealand.  Hofstra’s 2019 inductees were:

In addition, Bruce Kardach ‘20 and Faigy Mandelbaum, a student in the PhD program for Clinical Psychology, were awarded the Allison Kim Levy Continuing Acts of Kindness Endowed Memorial Award. Named for a Hofstra psychology alumna who died in 1997, the $2,100 awards recognize students, faculty or staff members who have performed good works in the community.

Kardach works as a volunteer firefighter and certified EMS worker in Albertson, NY, where he has responded to hundreds of calls over the past year. He has participated in many optional training sessions to better his firefighting skills and, according to the nomination from his fire chief, he is a great comfort to families on the scene of fire and medical emergencies.

Mandelbaum spends much of her time working and fundraising for organizations that are close to her heart. These include Rachel’s Place shelter for homeless and runaway youths; Chai Lifeline, an organization that provides services for children with cancer and chronic illnesses; Heart + Sole Fund, which provides shoes for families in need; the Hebrew Academy for Special Children; and the JCK Foundation, which is dedicated to fighting misconceptions surrounding mental illness.