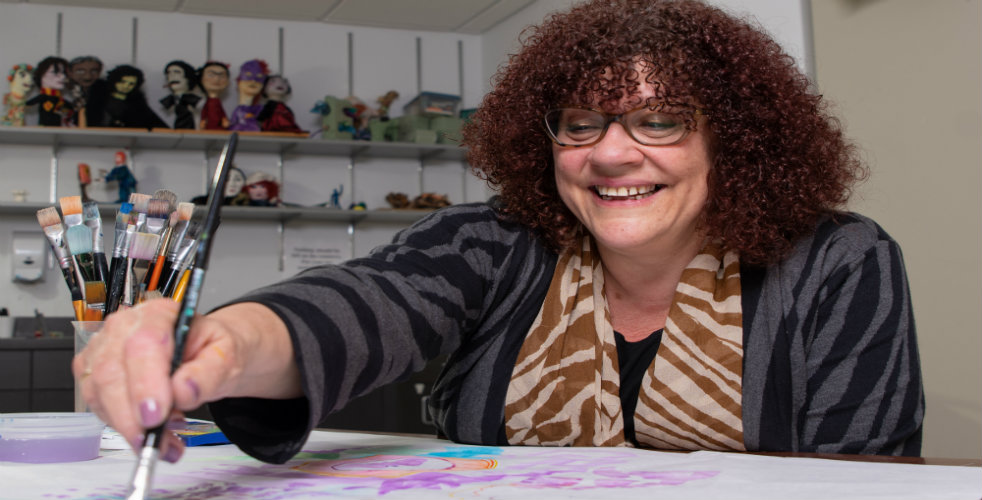 Professor Evangeline Christodoulou’s career in art education began when the principal of her daughter’s elementary school challenged her to develop an after-school art program. At the time, she was working as a graphic designer in New York City and had never even considered teaching.

“My daughter’s school had no courses in the arts, and as an artist, I just couldn’t understand how you could have a school without this,” she said. “I would complain about this so often that the principal said, ‘why don’t you just put a proposal together for a program and see if we can get 20 kids.’”

The program she created didn’t attract 20 kids. It got 40, including Christodoulou’s daughter.

“I remember thinking, ‘This is for me.’ It was so fun!” she said. “It was then I realized teaching art was something I’d like to do professionally.”

Christodoulou decided to pursue a master’s degree in Art Education at Hofstra University, where she met her now-mentor, Dr. Susan Goetz Zwirn, director of the Art Education program.

“As soon as I met Susan, I knew I wanted to do the program. She’s a wonderful example of a teaching artist who exudes professionalism, a quality that she imparts upon her students,” Christodoulou said. “The program allows you to develop and hone your creative abilities while learning hands-on skills such as how to conduct a classroom, create lesson plans, and teach art through different methods.”

After completing her MSEd in Art Education, Christodoulou landed a job as a high school art teacher in the West Hempstead School District. While teaching there, she kept in touch with Dr. Zwirn, and was even able to organize an exhibition of her students’ artwork in Hagedorn Hall at Hofstra.

“Working there, I began to understand the kind of impact I can make as a teacher,” she said.  “Because I worked and lived in West Hempstead, I knew the community very well. Many times, I’d been stopped in the street and thanked by a parent for what I did for their daughter or son.”

“One year, I had a student who was in a gang,’’ she said. “I knew he wasn’t doing the right thing or hanging around the right people, but he would always be in my second-period art class and really excelled. He would talk to me, I mean really open up, and I would do my best to help him through art.”

A year after he graduated, the student returned to her class.

“He said, ‘You were the only one at school that treated me like a person.’ He’d gotten on a good path and was working in sustainability,” she said. “I stood in front of the classroom with tears in my eyes. I think about that to this today; it’s experiences like this that make teaching so fulfilling.”

After over five years in the West Hempstead schools, Christodoulou decided to continue her career at Hofstra fulltime, where she has been an adjunct professor since 2013.

“It felt like coming home,” she said. “I still pinch myself that I work here. Being able to teach at the school that gave me my start has been extremely rewarding and I love being able to mentor students in pursuing their passions.”

Year’s Best Art on Display in Calkins
Recognized by Northwell