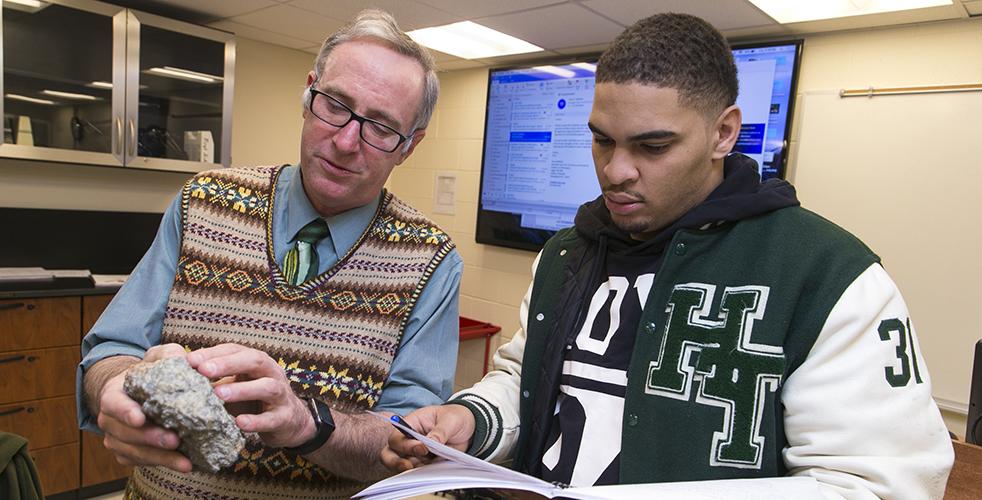 Whether he’s dressing up as Charles Darwin to channel how the scientist formulated the Theory of Natural Selection or taking students across the American west to follow the 2017 total solar eclipse, Dr. J Bret Bennington knows how to keep his classes engaged.

In honor of his creativity, Bennington has been named the recipient of the 2019 Neil Miner Award from the National Association of Geoscience Teachers (NAGT). The award  recognizes an individual “for exceptional contributions to the stimulation of interest in the Earth sciences.” Past recipients have included noted geologists Steven J. Gould of Harvard and J. Harland Bretz of the University of Chicago.

I am profoundly honored and gratified to have been nominated by my peers and selected by the NAGT,” Dr. Bennington said.  “Whatever I have accomplished over the 26 years I have been teaching that justifies this award, I have accomplished because of all of the knowledge, support, fellowship, and assistance I receive each and every day from my colleagues and students at Hofstra.”

Dr. Bennington joined the Hofstra faculty in 1993. His research in paleontology involves the quantitative analysis of the fossil record to learn about the evolution of ecological communities over long intervals of time. His projects through the years have involved studies of marine ecosystems in the Devonian, Carboniferous, and Cretaceous periods, as well as the statistical analysis of fossil footprints.

Other research activities involve the environmental history and glacial geomorphology of Long Island. He is currently working with Hofstra students on a project to study the physical controls on invasive Phragmites reeds in a coastal wetland in Douglas Manor, Queens.

“I think one of the reasons he is a successful teacher, besides being very smart and engaging, is that he implements cutting-edge pedagogy in the classroom,” Farmer wrote in her nomination letter. “He leads hands-on activities that reinforce the main principles of each lesson, while emphasizing the real-world applications of the concepts. It helps that he is funny, he is insightful, he is warm, and he makes every student feel welcomed and inspired.”

Dr. Bennington co-directs a study abroad program in the Galápagos Islands and Ecuador. In the summer of 2018 he and Professor Dr. Antonios Marsellos traveled with students to Greece to collect geological data from volcanoes in Santorini and Nisyros.

This spring Dr. Bennington co-directed the two-day symposium One Giant Leap: Apollo 11 @ 50, celebrating the 50th anniversary of Apollo 11. He is serving as principal investigator on STEM + Computer (STEM +C) Partnership, a program funded by a $1.6 million National Science Foundation grant awarded to Hofstra in 2017. This program has Hofstra University professors working with local high school teachers to develop a computationally-enhanced biology curriculum.

The Neil Miner Award is named for a renowned educator with “contagious enthusiasm for geology and unselfish dedication to his students and his profession.” Miner began his career at Cornell College in Iowa as chair of the Geology Department. His most important accomplishments included establishing Camp Norton, a summer geology field camp for students at Cornell College, Knox College, Syracuse University, and Miami University of Ohio in 1940, and organizing the Association of Geology Teachers in 1938, which has evolved into NAGT.

The Neil Miner Award is presented annually at the NAGT luncheon held during the national meeting of the Geological Society of America, this year in Phoenix, AZ.