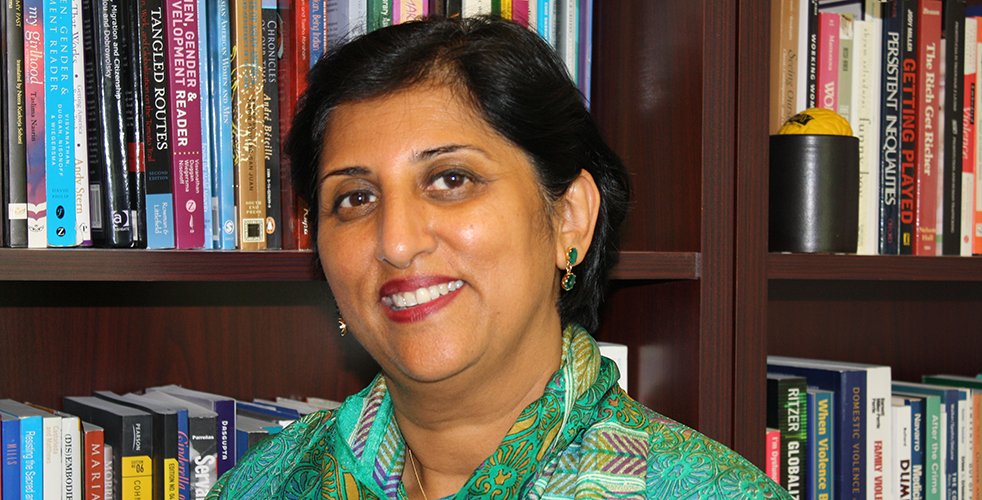 Margaret Abraham, PhD, professor of sociology and special advisor to the provost on diversity initiatives, has been selected to serve as Hofstra’s Harry H. Wachtel Distinguished Teaching Professor for the Study of Nonviolent Social Change. A convocation will be held in Fall 2019 to celebrate her installation.

The Harry H. Wachtel Distinguished Teaching Professor for the Study of Nonviolent Social Change, established at Hofstra in the late 1990s, is named for the Long Island corporate lawyer who for many years acted as a confidant and legal counsel to Dr. Martin Luther King Jr. According to his obituary in The New York Times, Mr. Wachtel often met with Dr. King, traveled with him and helped arrange meetings for him with American leaders and officials, including President Lyndon B. Johnson.

“Maggie Abraham has devoted her professional life to promoting positive social change and to ending violence,” said Professor and Chair of Hofstra’s Sociology Department William Mangino. “She is the consummate academic who bridges scholarship, teaching, and the public good.  No one is more deserving of the Wachtel Professorship for the Study of Nonviolent Social Change.”

Dr. Abraham joined Hofstra’s faculty in 1990. Her teaching and research interests include gender, ethnicity, globalization, migration and domestic violence. She served a 2014-2018 term aspresident of the International Sociological Association (ISA). The function of the ISA is to represent sociologists everywhere, regardless of their school of thought, scientific approaches or ideological opinion. She has also served as vice president of the organization and as the American Sociological Association representative (ASA) to the ISA. In January 2019 Dr. Abraham was the inaugural speaker of 44th All-India Sociological Conference. Last summer she gave the welcoming remarks at the XIX ISA World Congress of Sociology, held in Toronto, Canada. In 2015 she was invited to the White House to serve as a panelist for the “Advancing Equity for Women and Girls of Color” conference.

Dr. Abraham said, “I feel it is an immense honor, but also a sense of responsibility to carry forward the intent and legacy of the Harry H. Wachtel Distinguished Professorship.”

She is the third Hofstra faculty member to hold the Wachtel Distinguished Teaching Professorship. The first was Professor Emeritus of History Michael D’Innocenzo, who has been recognized throughout his career for his teaching, writing and community activities focused on civil rights and social justice. He was followed by Dr. Gregory Maney, who passed away in 2017. Dr. Maney was Dr. Abraham’s colleague in the Department of Sociology. His many accomplishments included collaborations with the LifeWay Network to study human trafficking in the New York metropolitan area; the Long Island Alliance for Peaceful Alternatives on creating local peace institutions; the Long Island Immigrant Alliance, on preventing and responding to hate crimes; and the Workplace Project on the human rights issues for day laborers.

“Maggie Abraham is a superb selection for the Harry H. Wachtel Distinguished Professorship for the Study of Nonviolent Social Change,” said Professor D’Innocenzo. “Because of what she has done and who she is, Maggie will reflect and extend the principled, nonviolent peace leadership that was at the core of Harry’s life and his close partnership with Dr. Martin Luther King, Jr.”

Dr. Abraham served as chair of the sociology department from 2000-2003 and has served as Director of Women Studies. Courses that she teaches include senior seminars on Violence Against Women; Globalization, Work and Citizenship; Women, Gender and Development; and Public Sociology. She has published in various journals including Gender & Society, Violence Against Women, Indian Journal of Gender Studies and Social Justice. She is the author of Speaking the Unspeakable: Marital Violence Among South Asian Immigrants in the United States (Rutgers University Press 2000), the first book on domestic violence within the South Asian diaspora in the United States. Speaking the Unspeakable won the American Sociological Association: Section on Asian and Asian America Outstanding Book Award in 2002. She also co-edited, Contours of Citizenship: Women, Diversity and the Practices of Citizenship published by Ashgate (Spring 2010); and Making a Difference: Linking Research and Action (Current Sociology Monograph: SAGE 2012).

Dr. Abraham’s newest book, Sociology and Social Justice (SAGE 2018), offers sociological insights on topics ranging from social movements to cyber space and is described as an essential text for those looking at issues of human rights, public sociology, democratization, gender, and globalization.