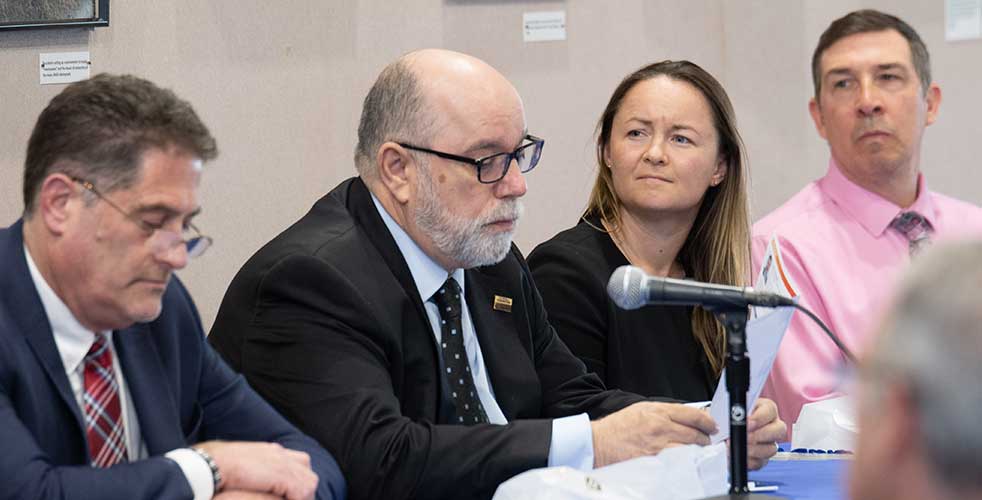 Almost seven years after Superstorm Sandy, a panel of civil engineers met to discuss the importance of designing critical infrastructure such as buildings and bridges capable of absorbing and rebounding from a catastrophic event.

“Superstorm Sandy has become the centerpiece of the discussion of coastal resilience in the metropolitan region and the entire eastern seaboard, for that matter,” said Brian Schneider deputy county executive for Nassau County parks and public works and moderator of the panel discussion.  “The response to Sandy will continue to drive current and future reconstruction projects in the region so we can be better prepared to bounce back from a Sandy-type storm.”

Approximately fifty students, faculty and local community members attended the panel which was the final Executive Speaker Series lecture of the year hosted by the Fred DeMatteis School of Engineering and Applied Science.

“The most enlightening part of the panel discussion was the explanation of how current resilience projects are being constructed,” said civil engineering major Kevin Cunningham ’20. “It’s interesting how the plan is not necessarily to prevent these events from occurring, but rather to help communities recover from the events more quickly.”

At the start of the discussion, the panelists agreed that a long-term resiliency plan for the east coast should begin with educating the public, about how government money is being invested and what they can reasonably expect from infrastructure projects.

“Education is lacking,” Friend said.  “People expect that they are going to be protected but they need to know that no matter what system we create, it will provide a reduction in risk but not total protection. There will always be damage, but the important thing is our ability to recover after a disaster happens.”

Schneider, who represents the county for two of the largest Army Corp of Engineers Sandy recovery projects, pointed out that future extreme events will be exacerbated by climate change and rising sea levels. The key, he said, is implementing changes that will mitigate damage along the way.

Filotti agreed: “If you try to build something to FEMA standards now, in 10 years it will most likely be outdated.”

According to the panelists, a resiliency plan also requires collaboration between federal and local agencies.

“Local communities know what services suffered most during Sandy,” Barrett said.  “We need to figure out how to share that information with federal government and marry those resources.”

When asked if there is a limit to what engineers can do to mitigate the negative socioeconomic impact of a natural disaster, Barrett said, “There’s usually an engineering solution for everything, but it comes down to economics and social issues. That’s ultimately what will dictate whether or not jobs get done.”