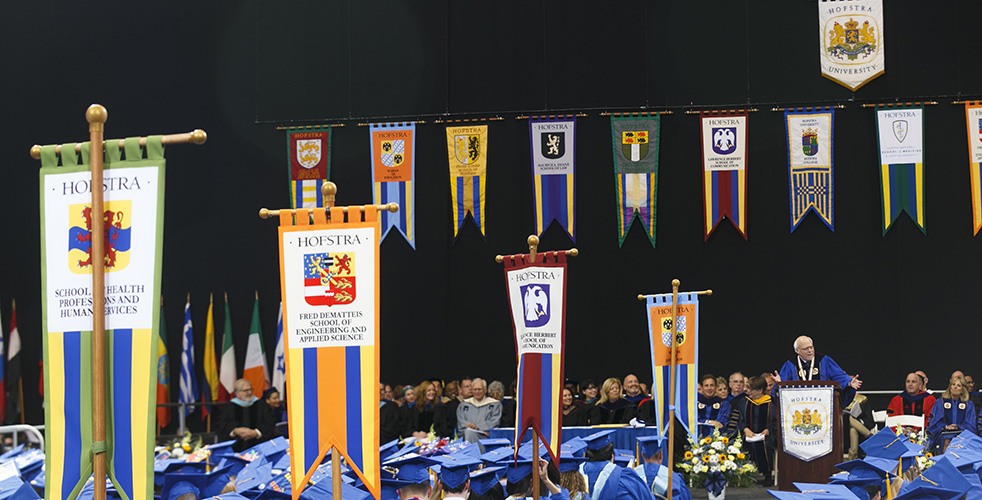 CNN’s lead political anchor Wolf Blitzer, TIAA’s President and CEO Roger W. Ferguson, Jr., former Attorney General of the United States Loretta Lynch, and Emmy Award-winning actor Joe Morton will be the speakers at Hofstra University’s spring commencement activities on Sunday and Monday, May 19-20, 2019.  All ceremonies take place at the David S. Mack Sports and Exhibition Complex, located on Hofstra’s North Campus. There will also be live webcasts of each of the ceremonies.

9 a.m. Emmy Award and multiple NAACP Image Award-winning film, television, and stage veteran Joe Morton is speaking at the Undergraduate Ceremony for Hofstra College of Liberal Arts and Sciences, School of Education, School of Health Professions and Human Services and Hofstra Northwell School of Graduate Nursing and Physician Assistant Studies. Mr. Morton, an alumnus of Hofstra University, is best known for his dynamic role as Rowan Pope in ABC’s groundbreaking series Scandal. He currently stars in the CBS series God Friended Me.

1 p.m. Wolf Blitzer, CNN’s lead political anchor, will speak at the Undergraduate Ceremony for Frank G. Zarb School of Business, Lawrence Herbert School of Communication and the Fred DeMatteis School of Engineering and Applied Science. As anchor of The Situation Room with Wolf Blitzer, he provides viewers with in-depth reports about the political, international and breaking news stories of the day. He is also pivotal to CNN’s election coverage, serving as the moderator for CNN debates and as lead anchor on key primary nights, caucus nights and in Emmy award-winning coverage.

5 p.m. The Graduate Ceremony (all schools) features speaker Roger W. Ferguson, Jr., president and Chief Executive Officer of TIAA, the leading provider of retirement services in the academic, research, medical, and cultural fields and a Fortune 100 financial services organization. Dr. Ferguson is the former Vice Chairman of the Board of Governors of the U.S. Federal Reserve System.

7 p.m. The Honorable Loretta Lynch, former Attorney General of the United States, is the commencement speaker at the Maurice A. Deane School of Law Ceremony. Appointed by President Barack Obama in 2015, she is the first female African-American to hold the position. Ms. Lynch also served as the head of the U.S. Attorney’s Office for the Eastern District of New York twice, under both President Bill Clinton and President Obama.

Undergraduate Ceremonies:  Seating for the undergraduate ceremonies is limited due to the size of the David S. Mack Sports and Exhibition Complex. Each spring undergraduate receives 6 assigned seat tickets. Requests for additional tickets can be obtained by placing your name on a lottery list during robe distribution, on Tuesday or Wednesday, May 14 and May 15, 2019, between the hours of 10 a.m.-8 p.m. in the lower level of the Bookstore at the Mack Student Center.

Lottery winners will be notified via their pride account beginning Thursday, May 16, 2019.

Lottery winners must either respond to the email that they will take the extra tickets. If there is no response within 2 hours, the tickets will be awarded to the next person on the lottery list.  All tickets must be picked up by the requesting student at the reception desk located in the David S. Mack Student Center, room 112 by 5 p.m. on Friday, May 17, 2019

For additional information on commencement activities, such as eligibility, robing and diplomas, please visit the website or call the Commencement office at (516) 463-4346. In the event of a severe weather event, please call the weather hotline (516) 463-SNOW regarding the status of the ceremony.

More about the honorees

Wolf Blitzer is CNN’s lead political anchor and the anchor of The Situation Room with Wolf Blitzer, providing viewers with in-depth reports about the political, international, and breaking news stories of the day.

In 2016, Mr. Blitzer served as moderator for the CNN Republican Presidential Primary debates in Las Vegas and Houston, and the Democratic Presidential Primary Debate in Brooklyn, New York. He was pivotal to CNN’s election coverage throughout America’s Choice 2012, and moderated three of CNN’s Republican presidential debates. During the 2008 presidential election, Wolf Blitzer spearheaded CNN’s Peabody Award-winning coverage of the presidential primary debates and campaigns. He also led CNN’s Emmy-winning “America Votes 2006” coverage and “America Votes 2004.” Furthermore, he anchored the network’s coverage during the inaugurations of presidents Barack Obama and George W. Bush.

In addition to politics, Mr. Blitzer is known for his in-depth reporting on international news and his Middle East expertise. Among his numerous honors for reporting, Mr. Blitzer was a part of the CNN team to earn a 2012 Emmy Award for the network’s coverage of the revolution in Egypt, leading up to and including the resignation of Hosni Mubarak. He was vital to the network’s efforts to earn the 2006 Emmy Award for live Election Day coverage. He is also the recipient of the 2004 Journalist Pillar of Justice Award from the Respect for Law Alliance and the 2003 Daniel Pearl Award from the Chicago Press Veterans Association. He was also among the teams awarded a George Foster Peabody Award for Hurricane Katrina coverage; an Alfred I. du Pont Award for coverage of the tsunami disaster in Southeast Asia; and an Edward R. Murrow Award for CNN’s coverage of the September 11 terrorist attacks in 2001.

Roger W. Ferguson, Jr. is president and chief executive officer of TIAA, the leading provider of retirement services in the academic, research, medical, and cultural fields and a Fortune 100 financial services organization.

Dr. Ferguson is the former vice chairman of the Board of Governors of the U.S. Federal Reserve System. He represented the Federal Reserve on several international policy groups and served on key Federal Reserve System committees, including Payment System Oversight, Reserve Bank Operations, and Supervision and Regulation. As the only governor in Washington, D.C., on 9/11, he led the Fed’s initial response to the terrorist attacks, taking actions that kept the U.S. financial system functioning while reassuring the global financial community that the U.S. economy would not be paralyzed.

Dr. Ferguson is a member of the Smithsonian Institution’s Board of Regents and serves on the New York State Insurance Advisory Board. He is a fellow of the American Academy of Arts & Sciences and co-chairs its Commission on the Future of Undergraduate Education. He serves on the boards of Alphabet Inc.; General Mills, Inc.; and International Flavors & Fragrances, Inc.

He is chairman of The Conference Board and serves on the boards of the American Council of Life Insurers, the Institute for Advanced Study, and Memorial Sloan Kettering Cancer Center. He is a fellow of the American Philosophical Society and a member of the Economic Club of New York, the Council on Foreign Relations, the Group of Thirty, and the National Association for Business Economics.

Dr. Ferguson served on President Obama’s Council on Jobs and Competitiveness as well as its predecessor, the Economic Recovery Advisory Board, and co-chaired the National Academy of Sciences’ Committee on the Long-Run Macroeconomic Effects of the Aging U.S. Population.

One of the most highly accomplished public figures in America today, former Attorney General Loretta Lynch has been a leading progressive voice during her more than 30-year highly distinguished career. She served as the 83rd attorney general of the United States from 2015 to 2017.

She is the first female African American attorney general of the United States, appointed by President Barack Obama. She also served as the head of the U.S. Attorney’s Office for the Eastern District of New York twice, under both President Clinton and President Obama. Described by President Obama as “the only lawyer in America who battles mobsters, drug lords, and terrorists, and still has the reputation for being a charming ‘people person,’” she has been instrumental in shaping the direction of the nation on numerous tough issues. She improved the relationship between local law enforcement and the communities they serve, and she has taken bold stances on criminal justice reform.

Ms. Lynch spent years in the trenches rising through the ranks as a prosecutor, aggressively fighting terrorism, financial fraud, and cybercrime – all while vigorously defending civil and human rights. While leading the U.S. Attorney’s Office for the Eastern District of New York, she became known for the high-profile civil rights conviction of two Brooklyn police officers who brutally assaulted Haitian immigrant Abner Louima.

While in private practice, Ms. Lynch served as a volunteer legal advisor for the International Criminal Tribunal for Rwanda, established to prosecute those responsible for human rights violations in the 1994 genocide in that nation.

Emmy Award and multiple NAACP Image Award-winning film, television, and stage veteran Joe Morton is best known for his dynamic role as Rowan Pope in ABC’s groundbreaking series Scandal. In early 2016, Mr. Morton made an appearance in Batman vs. Superman: Dawn of Justice as Silas Stone, and reprised his role in the film Justice League in 2017. He also recently portrayed the role of Roy Wilkins alongside Bryan Cranston in the Emmy-nominated HBO biopic All the Way, adapted from the Tony Award-winning Robert Schenkkan play. Currently, Mr. Morton stars as Reverend Arthur Finer in the CBS series God Friended Me.

Mr. Morton recently returned to the stage as the titular role alongside Tom Hanks in Shakespeare Center of Los Angeles’ production of Henry IV. In spring 2016, Mr. Morton portrayed the groundbreaking comedian Dick Gregory in the one-man show Turn Me Loose, executive produced by John Legend. Mr. Morton was recently honored with the NAACP Theatre Lifetime Achievement Award and was awarded the Lucille Lortel Award for Outstanding Lead Actor in a Play. He was also nominated for the Drama League Award for Distinguished Performance.

Besides his Emmy-winning role in Scandal, Mr. Morton is widely known for playing the title character in John Sayle’s sci-fi film The Brother From Another Planet and as the ill-fated scientist Miles Dyson in Terminator 2: Judgment Day. Other film credits include Speed, American Gangster, What Lies Beneath, Blues Brothers 2000 and The Astronaut’s Wife, among many others. On the small screen, he had recurring roles in the Emmy-nominated SyFy series Eureka; CBS’s The Good Wife; and the Kyra Sedgwick-produced TNT medical drama Proof.

After attending Hofstra University for drama, he debuted on Broadway in the Tony Award-winning musical Hair, followed by his starring role in Raisin, the Tony Award-winning musical adaptation of Lorraine Hansberry’s A Raisin in the Sun, for which he garnered a Tony nomination and a Theatre World Award for his portrayal of the embittered Walter Lee Younger. He also appeared in David Hare’s Stuff Happens at the National Theatre in London as Colin Powell, and played Serge in Art on Broadway (and in London’s West End) with Judd Hirsch and George Wendt.