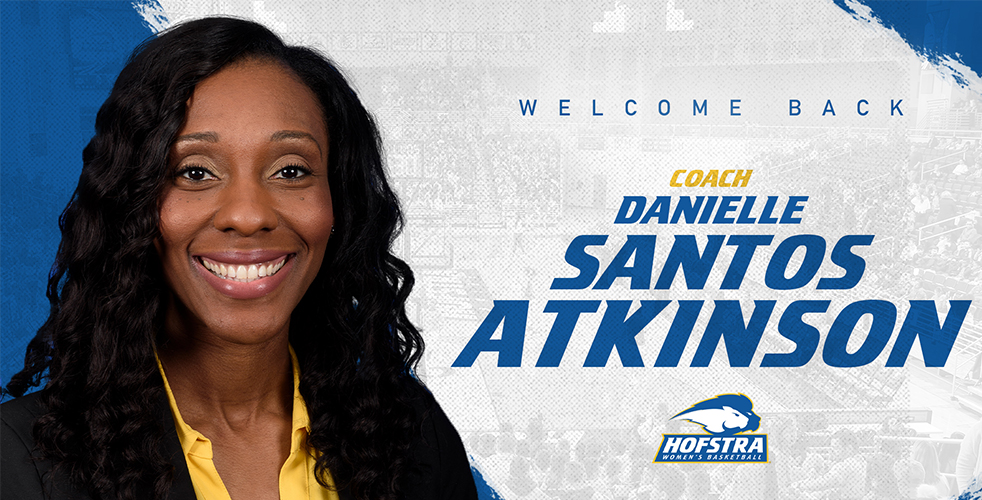 Hofstra will hold an introductory press conference on Monday at 11 a.m. in the David S. Mack Sports and Exhibition Complex. Members of the Hofstra community are invited to attend as the University welcomes Coach Santos and her family.

“I am honored to be coming back to Hofstra and thankful to President Stuart Rabinowitz and Director of Athletics Rick Cole Jr. for entrusting me to lead the Pride Women’s Basketball program,” commented Santos. “My career has come full circle and I could not be more delighted to return to a place that means so much to me and to an institution that shares the same values and vision that I have for the Hofstra Women’s Basketball program. I am so appreciative of Coach Kilburn-Steveskey and all the alumnae that have built such a strong foundation at Hofstra and I know the future is bright. My family and I are overjoyed by this opportunity and look forward to involving ourselves in the Hofstra community.”

“We are absolutely thrilled to welcome Coach Santos, Cleveland, and London to the Hofstra family,” stated Cole Jr. “Danielle has been successful at every stop on her journey and we are excited that she will be joining us. Coach Santos is an outstanding role model for the young women on our women’s basketball team and she will be a strong pillar of the Hofstra community. Danielle has established herself as one of the top assistant coaches in the nation and her ability to recruit and develop outstanding student-athletes, both on and off the court and in the classroom, will assist our women’s basketball program as we strive to win Colonial Athletic Association titles and advance to the NCAA Tournament.”

“The University is delighted to welcome Danielle and her family to Hofstra,” said Hofstra President Stuart Rabinowitz. “Danielle will bring extraordinary energy and leadership to our women’s basketball program. It is clear to see that she shares our goals of recruiting and teaching outstanding student-athletes who excel on the court, in the classroom, and in the community.”

Santos furthered her coaching acumen this past year as she accepted the role as associate head coach at Pittsburgh. The Panthers took an immediate step forward as Pittsburgh increased their win total and the new staff brought about a culture change to the program that has a bright future ahead of it.

Santos’ career would skyrocket during a tremendous four-year stint at Florida State where she served as the recruiting coordinator for a program that compiled 111 wins and a winning percentage of .810, while winning 25-or more games and going to the NCAA Tournament in all four campaigns. The Seminoles made two Elite Eight appearances, a Sweet 16 appearance and advanced to the second round as well. Her astute recruiting ability saw Florida State have two recruiting classes ranked in the top five nationally and six student-athletes that she assisted in developing earned All-America honors and numerous Atlantic Coast Conference accolades. The Seminoles high-powered offense ranked in the top 25 nationally in scoring offense in three separate seasons and the team set a program record with 32 wins in 2014-15.

Santos spent the 2012-13 and 2013-14 season at Kentucky and served as the defensive coordinator for the Wildcats during her tenure in Lexington. Kentucky’s 2013 recruiting class was ranked fifth nationally and on the court, the Wildcats advanced to the Sweet 16 her first year and followed that up with an Elite Eight appearance in her second go-around.

At Illinois State, Santos paid immediate dividends as both seasons saw the Redbirds advance to the WNIT, including a semifinal appearance in 2010-11. During her two years, Illinois State posted 43 triumphs and Santos aided in the development of seven award winners from the Missouri Valley Conference.

During her previous stop at Hofstra, Santos was part of a pair of 20-win seasons and the Pride earned two bids to the WNIT. The 2006-07 squad advanced to the WNIT Quarterfinals and set the program’s NCAA Division I mark with 26 victories. She assisted in all aspects of the program and played a strong role in the recruitment and development of four all-conference performers and five CAA All-Rookie selections.

Santos has been quite active on the national level as it relates to professional development. She has taken part in the Women’s Basketball Coaches Association Women’s Coaches NEXT UP Program, the Villa 7 Leadership Conference, Next Chair, A Step Up Assistant Coaches Symposium, NCAA/BCA Achieving Coaching Excellence Program, Coaching U Live Conference, and the NCAA Women’s Coaches Leadership Academy.

Santos had a strong career as a student-athlete at the University of Florida from 2002 to 2006. The Gators made three postseason appearances during her career, including NCAA Tournament appearances in 2003-04 (second round) and 2005-06. A 2004 CoSIDA Academic All-District selection, Santos finished her career with 831 points, 265 assists, 162 steals, and 80 three-pointers. She ranks in the top 20 all-time at Florida in assists and three-pointers. Santos earned SEC Academic Honor Roll accolades four times and was a 2005 Arthur Ashe Jr. Scholar-Athlete. She was also a member of the Alpha Lambda Delta Honors Society, National Collegiate Honors Society and Phi Eta Sigma Academic Honors Society. Santos is also a proud member of Delta Sigma Theta Sorority Inc.

Santos earned her bachelor of science degree in exercise and sport sciences/sport management with minors in business administration and education from Florida in 2006.

Santos is a member of the Wheeler (GA) High School Athletic Hall of Fame, where she graduated from in 2002.

Santos and her husband, Cleveland, have one daughter, London (2).