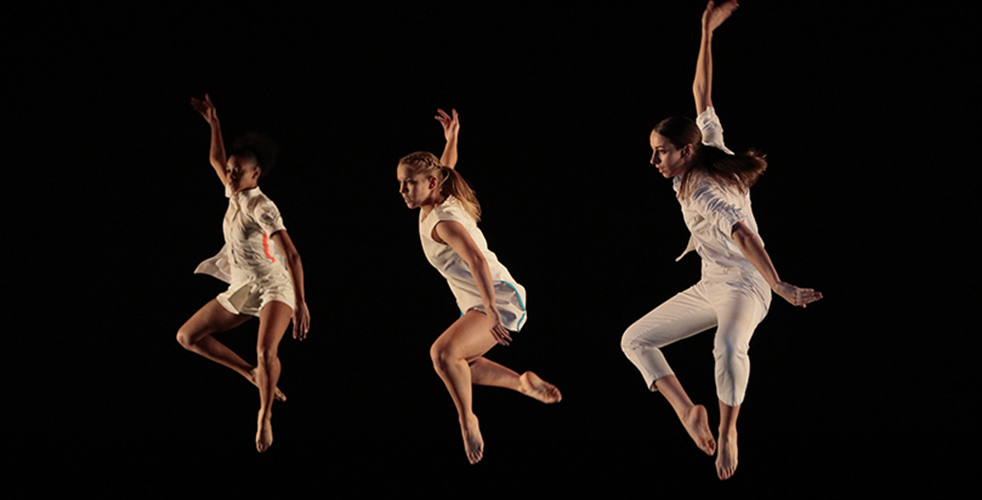 Karnas is a dance artist and educator originally from Porto Alegre, Brazil, who has presented choreographic works at venues in Brazil and New York City, including Teatro Renascença, Dixon Place, Triskelion Arts, Center for Performance Research, HATCH Series, Symphony Space, and Winter Follies. In 2013 Karnas was a Brazil Scientific Mobility Program scholarship recipient. She studied dance for one year at Hofstra University and ultimately graduated with a degree in dance education from the Federal University of Rio Grande do Sul – UFRGS (Brazil) and an MFA in Performance and Choreography from SUNY/Brockport.

Also new to the Dance Concert lineup is faculty member Olivia Mode-Cater, Hofstra’s new director of dance education. Previously, Olivia was an adjunct faculty member of the dance department at Rutgers University, supervising graduate student teaching interns and teaching several courses at the undergraduate and graduate levels. She also created dance programs in a public charter high school and a private PK-12 school in New Jersey. Mode-Cater has presented on dance education at national and regional conferences including NJAHPERD, NJ Charter Schools Conference, and NDEO. Her high-quality teaching has earned several awards, and she serves on the Board of Dance New Jersey as an advisory to the education committee. She also contributes to and has been published in Dance Studio Life magazine as part of the “Classroom Connection” column. Lastly, she is the founder of Dance ED Tips, which offers online courses, private coaching, live workshops and teaching materials to dance teachers.

The concert will take place at the Toni and Martin Sosnoff Theater at the John Cranford Adams Playhouse. Show times are 8 p.m. Thursday and Friday; 2 and 8 p.m. on Saturday; and 2 p.m. on Sunday.

Members of the Hofstra community receive two free tickets upon presentation of a current HofstraCard. Tickets are $10; $8 for senior citizens (over 65) or matriculated, non-Hofstra students with I.D. For tickets call the Hofstra Box Office at 516-463-6644 Monday-Friday, 11 a.m.-3:45 p.m. or purchase online at Hofstratickets.com. If available, tickets will also be sold at the door starting 90 minutes prior to show time.

Bound(less), choreographed by Special Assistant Professor Olivia Mode-Cater is a work for 11 women that explores the idea of being bound to one place, seeking an escape.

Adjunct Instructor Heather Waldon writes: “There were two thoughts I played with when building Cause/Effect. One came from the idea that we can do more together than we can alone. The other was how we watch something and react. I wanted to keep a democracy on the stage while allowing the dancers to still be individuals.”

Coterie, choreographed by Assistant Professor Robbie Cook, is an exploration of ritualistic circle dances for the 21st century. Taking inspiration from cultural and religious circle dances from various influences, Coterie attempts not to interpret or extrapolate the sources of inspiration, but rather to develop its own unique physical language in a contemporary “concert dance” environment.

Crash and Move, choreographed by Adjunct Assistant Professor Colin Stilwell is a dance about the interrelation between movement amplifying music and music enhancing movement. This relationship reveals a dynamic dance, as a group, individually, and in spatial structures and patterns.

Tuning the Space by guest choreographer Luiza Karnas is an investigation of choreographic possibilities and new perspectives within a form grounded in tradition. It incorporates the more usual percussive sounds found in a tap dance as well as upper body movements, such as wheeling arms, a mobile torso and spatial intention.

Longing and Until the Angels Came are the final two movements of Into Sunlight by Associate Professor Robin Becker. Into Sunlight was inspired by They Marched Into Sunlight, Washington Post journalist David Maraniss’ powerful book on the Vietnam Era. “I was deeply moved by the integrity, honor and commitment of both those who fought the war, and those who fought against it,” says Professor Becker. “Through Into Sunlight, it was my hope that the universal language of the body would reflect the inclusive sense of understanding that David’s words evoked in me.” Longing is a duet expressing the sorrows of war, and Until the Angels Came is the closing movement with 16 dancers. Professor Becker premiered Into Sunlight at Hofstra in 2011 and has since performed it all over the world.

The Hofstra University Department of Drama and Dance provides its students with the opportunity to develop and hone their skills as performers, and deepen their appreciation for the arts. Hofstra’s dance degrees include a BFA in Dance, a BA in Dance, and a BS in Education, Dance Education.