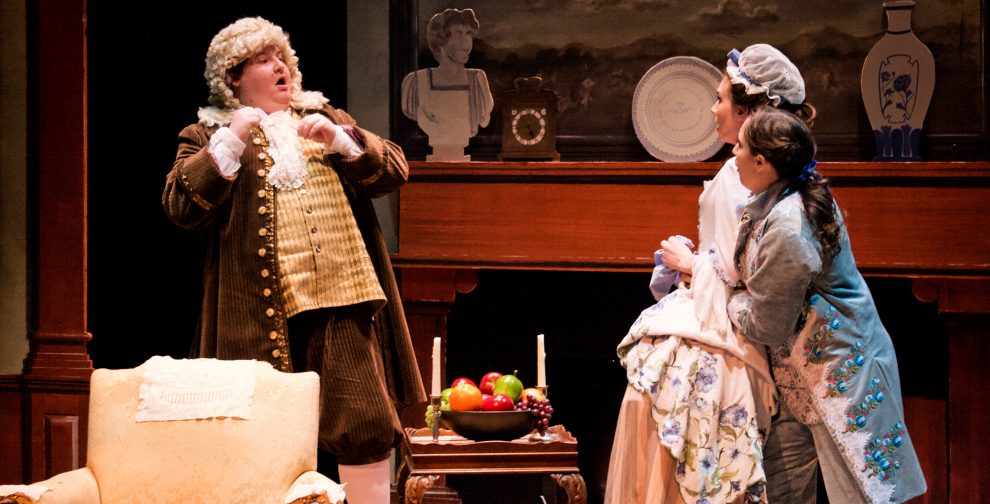 The Department of Drama and Dance will perform Oliver Goldsmith’s She Stoops to Conquer, a comedy written in 1773 that is brimming with practical jokes, assumed identities and schemes within schemes.

Subtitled The Mistakes of a Night, the play’s fast-paced plot centers around the spirited Kate Hardcastle and her attempts to win the heart of a socially awkward suitor.

Director Christopher Dippel, assistant professor of drama, explains that even though the show was written in the 18th century, the characters are relatable and enjoyable. “At its heart, She Stoops to Conquer is a play about people – specifically two young couples who are trying to get together in a world where rules and societal expectations threaten to keep them apart. Doesn’t that still ring true today?” Dippel’s resume includes credits Off- and Off-Off-Broadway and work with the New York Neo-Futurists, a theater company of which he was a founding member.

When asked why this classic piece of theater was selected as part of the Drama Program’s spring season, Dippel said the aim is to give students variety in their performance experience. “Variety in style, variety in tone, variety in time period, etc. Oliver Goldsmith called this play a laughing comedy. He hoped it would be a play that cared more about making people laugh than about teaching them a lesson. It is meant to be silly and fun and entertaining.”

The department also presents a symposium along with the show on Wednesday, April 17 at 11:30 a.m. in the Spiegel Theater on South Campus in order to discuss the complex weavings and plot structures of the play. Admission is free and open to the public.

Tickets are $10, $8 for senior citizens. Members of the Hofstra community receive two free tickets upon presentation of a current HofstraCard. For tickets and information call the Hofstra Box Office at 516-463-6644, or purchase tickets online. If seats are still available on the day of performance, tickets will be sold at the door starting 90 minutes prior to show time at the theater box office window. (Please note, free tickets for Hofstra community members cannot be reserved online. They may be picked up at the Box Office.)