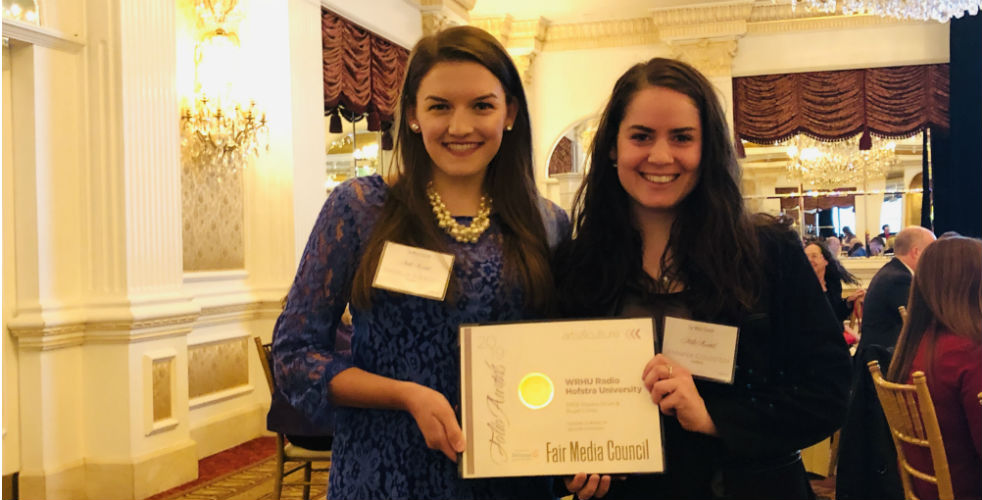 Members of the Hofstra University community were honored for excellence in news reporting and social media by the Fair Media Council at its annual Folio Awards ceremony in Garden City, New York on Wednesday, March 27, 2019.

Ed Ingles, who recently retired as professional-in-residence at WRHU 88.7 FM Radio Hofstra University, was honored with a lifetime achievement award for his work as a news and sports broadcaster in New York City radio for 40 years – including 24 years as sports director at WCBS AM 880, where he was also a morning drive-time sports updates anchor.  He has also worked as a broadcaster for New York Jets’ NFL football games and made appearances on CBS’ NFL pre-game shows.  He has mentored generations of students at WRHU, part of the Lawrence Herbert School of Communication, for more than 20 years.

WRHU student reporters Danielle Zulkosky and Jennifer Goldstein won in the arts and culture radio category for their piece, “Free Players Drum and Bugle Corps.”  Zulkosky is a former program director, while Goldstein serves as news director at the award-winning student-run station, which has been named the nation’s best college radio station several times by The Princeton Review and BestColleges.com.

The Fair Media Council, based in Bethpage, NY, is a nonprofit organization that advocates for quality local news coverage.

Rise and Fall of Michael Avenatti
60 Years of Radio Excellence