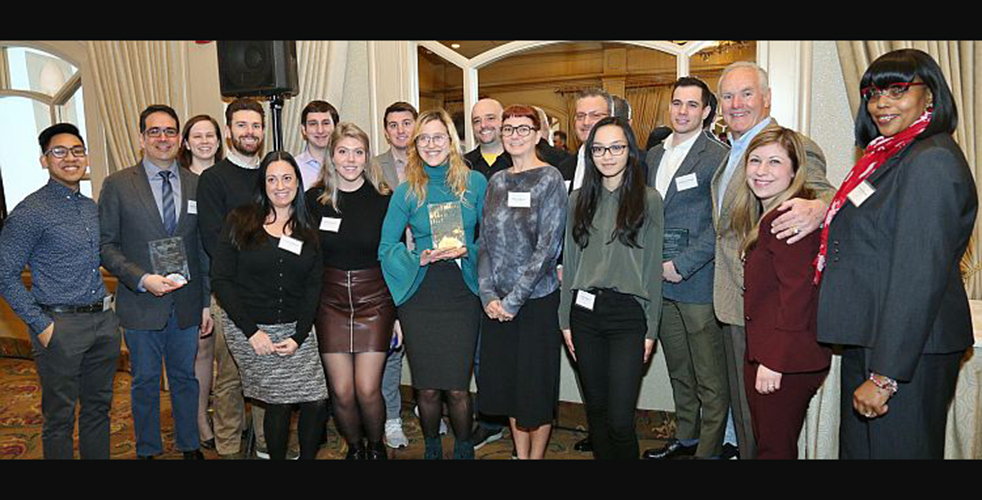 HFaculty, students and alumni were among the 2019 honorees of the Fourth Annual Innovator of Year Awards presented by Innovate Long Island. The breakfast, held on March 26 at Crest Hollow Country Club, honored two dozen of Long Island’s most distinguished researchers, inventors, entrepreneurs and executives.

Unispan Records, Hofstra’s student-run record label was a recipient of the Young Innovator Awards. Based in the University’s Center for Entrepreneurship, Unispan Records allows selected students to be mentored by top industry professionals and learn about commercialized music over the course of the semester. The first cohort of students signed IzzeYe, a hip-hop artist and Hofstra alumnus, and worked on his first Extended Play (EP) record, Illusions, which was released on all major streaming services in October 2017. IzzeYe was one of the opening acts for Lil Wayne at Hofstra’s Fall Festival 2017.

KarmaRé, a dark-pop singer/songwriter from Long Island, is the second artist signed to Unispan Records. She is currently working with the label to record Moodring, a follow-up to her debut EP, Not Fazed.

This spring 2019, the Unispan staff is marketing and promoting Moodring and working on signing a new artist. Some of the areas students gain experience in are A&R (Artist and Repertoire); marketing, promotion and publicity; radio; creative services; Internet and new media; distribution and sales; and artist and project management.

Hofstra University Assistant Biology Professor Javier Izquierdo was honored with a Clean Gen Award. Dr. Izquierdo is a microbiologist looking to improve local plant health and turn agricultural waste into cutting-edge biofuels. Professor Izquierdo’s continued research, which involves the study of beach grass, was awarded a $476,000 grant in March 2018 by the National Science Foundation. More recently, the Department of Energy Joint Genome Institute accepted his proposal to sequence 48 genomes of plant-associated microbes. The microbes are ones the professor and his students have isolated and found to be the most likely to produce healthy and resilient plants.

Mitch Maiman ’75, was a recipient of the breakfast’s top honor, the Master of Innovation Award. Maiman is president and cofounder of Intelligent Product Solutions (IPS), a leading product design and development firm based in Hauppauge. The company started a little over a decade ago with just a small engineering staff and has grown to more than 100 designers and engineers, serving customers across North America and the globe. Prior to launching IPS, Maiman was VP of Engineering at Symbol Technologies. In addition to his BBA from Hofstra, Maiman has a MS in Mechanical Engineering from Columbia University, an MBA from Fairleigh Dickinson University, and holds a portfolio of numerous United States and international patents.

The History of Anti-Drug PSAs
﻿Exhibit with “Impact”