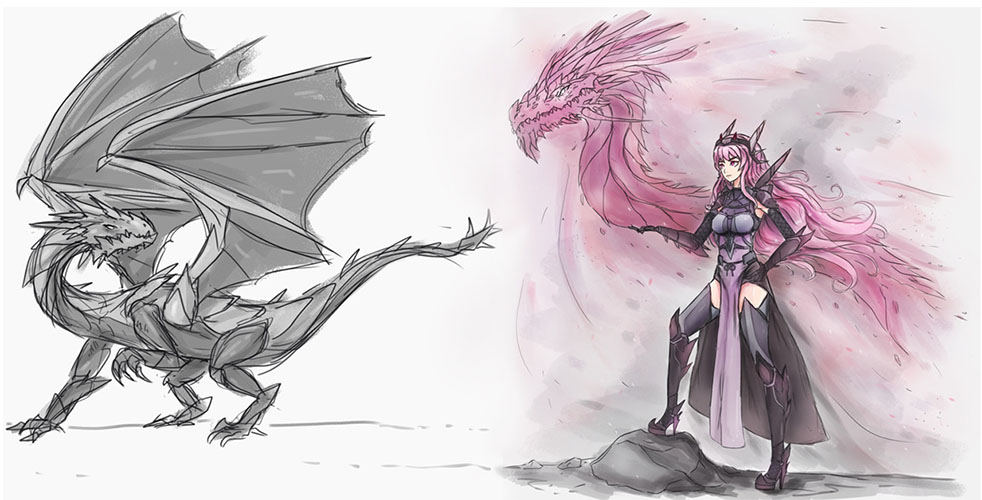 (almost) Everything, an exhibition of works by Jorden Prussing ’19, will be on display at the FORM Gallery, March 25-30. The show features nearly 100 works of digital art, inspired by anime, comic books, and video games.

Prussing, a fine arts major with a concentration in design, came to Hofstra from Honolulu, HI. “I wanted to go to a college on the mainland,” he said. “I focused my search on the East Coast. New York was high on my list, but I didn’t want to live in the city. Hofstra was a good alternative for me since I am still able to go to the city every couple of weeks. I also experienced snow for the first time during my freshman year.”

Prussing’s art is strongly influenced by media from his childhood. “My style takes parts of the anime and comic genres and mixes them with realism. I love to draw dragons, robots, super heroes, and more.”

As a graduating senior, Prussing wanted his final solo show to encompass as much of his work as possible. “I called the show (almost) Everything, because in addition to new pieces it will include art from previous shows I’ve had at Hofstra. Honestly, there is so much more work that didn’t make it into the exhibit, but I hope what is on display shows how I’ve progressed from 2017 to now.”

Although art started out as a hobby, Prussing decided to pursue a career as a “concept artist” during his sophomore year at Hofstra. After graduating this spring, Prussing plans to apply to concept art programs in order to make more industry connections and further refine his skills.

There will be an opening reception for (almost) Everything on Monday, March 25, at 8:30 p.m. The FORM Gallery is located on the first floor of Calkins Hall. For more information on this and other FORM exhibits, call the Department of Fine Arts, Design, and Art History at 516-463-5474.