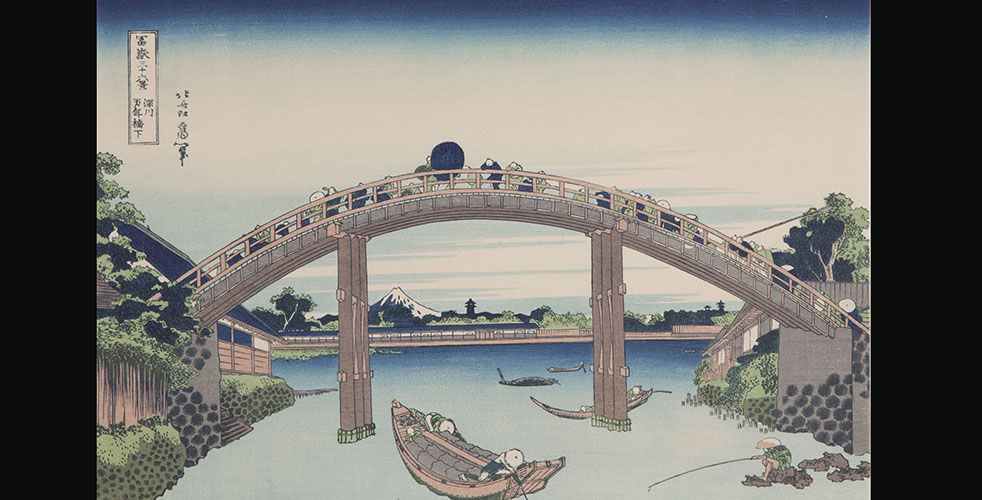 Inspiration: Japanese Woodblock Prints is an exhibit of traditional woodblock prints from the permanent collection of the Hofstra University Museum of Art. Also on display are examples of manga (Japanese graphic novels) from the Special Collections of Hofstra University’s Joan and Donald E. Axinn Library and woodblock prints on loan from The Tolman Collection of Tokyo.

Inspiration: Japanese Woodblock Prints will be on display from March 26-July 26 at the David Filderman Gallery, located on the ninth floor of the Axinn Library, South Campus. The public is invited to a free opening reception on Thursday, April 11, 4-6 p.m., featuring special remarks by Patricia Welch, Hofstra Professor of Japanese and Chair of the Department of Comparative Literature, Languages, and Linguistics.

The exhibition, curated by Museum Deputy Director and Chief Curator Karen T. Albert, addresses how Japanese woodblock prints became a source of artistic inspiration. Nancy Richner, director of the Hofstra University Museum of Art, says, “Japanese woodblock prints have influenced Western art in ways we may not be aware, including in printmaking, film, video games and comic books.”

Distinctive characteristics of the prints include asymmetrical compositions, unusual angles and aerial perspectives. Simplified forms and sparse spaces, with flat planes of color and bold linear outlines, were also employed.

A screening of The Tale of the Princess Kaguya at the Guthart Cultural Center Theater, Axinn Library, First Floor, will be presented on Wednesday, April 24, from 6-8:30 p.m. in conjunction with the exhibition. Directed by Isao Takahata, this Oscar-nominated animated film is based on a centuries-old Japanese folktale. An introduction will be presented by Rodney F. Hill, PhD, associate professor of film, Department of Radio, Television, Film, Hofstra University. Admission is $7 general public; $5 senior citizen (65+).

For more information about the exhibit and this associated public program, call (516) 463-5672 or visit the Hofstra University Museum of Art website.

The Hofstra University Museum of Art has been awarded the highest honor a museum can receive, continued accreditation by the American Alliance of Museums (AAM). Approximately 3% of museums nationwide have earned this distinguished recognition. Accreditation certifies that the Hofstra University Museum of Art operates according to professional standards, manages its collections responsibly and provides quality service to the public.