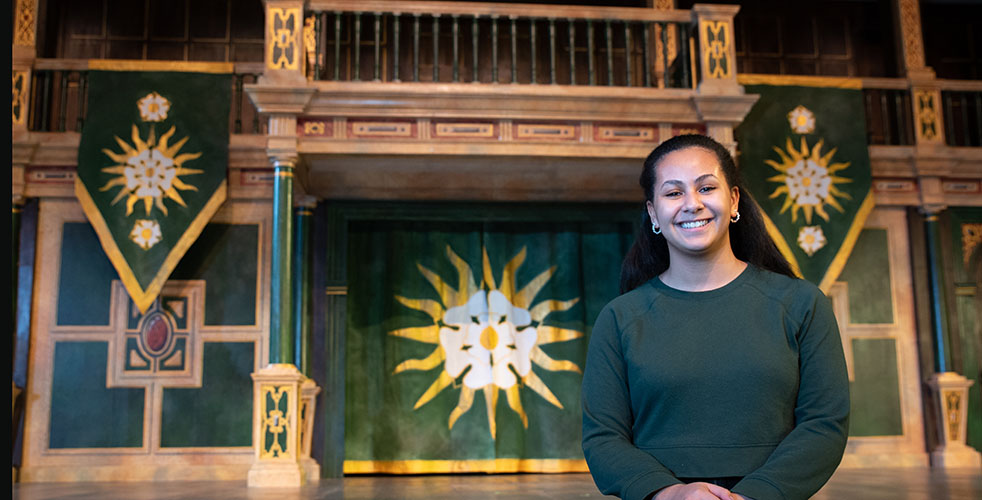 When Richard III debuts on the Hofstra Globe Stage on March 1 as part of the 70th annual Shakespeare Festival, it will have a talented cast breathing life into the Bard’s timeless characters. In addition to the actors, production students have been working tirelessly for months to build a successful show. Among these students is set designer Sophia Nahon ’19.  Working in partnership with director and Professor Jean Dobie Giebel, Nahon, a BFA production major, was tasked with coming up with a set that assists the storytelling, making it easier for the audience to follow the intricate plot involving a power struggle between rival kings.

Richard III marks Nahon’s third time as a scenic designer and her first working on the Hofstra Globe Stage, the most authentic replica of Shakespeare’s Globe stage in the US. “The Globe is an interesting challenge,” she says. “It’s extremely ornate, and once it is set up, it tells its own story. The job has been to add to it while respecting it.”

The Peekskill, NY, native says that she and Professor Giebel began talking about their ideas for Richard III last semester. “One of the things Jean and I first discussed was that often people have trouble understanding Shakespearean language. We thought the set design could play a part in helping people follow the story. This inspired me to think about banners and heraldry symbols. During the play there are three kings – Edward, Richard and Henry – who ruled during different periods in English history. The banners I created highlight each king and help the audience understand who is in power. Meredith Van Scoy, the costume designer, totally supported what I was doing. She incorporated elements of my banner designs in her costumes, so the audience knows characters are aligned with different kings.”

Nahon says she wanted the designs for her banners to have a solid foundation in history. She did extensive research on the reigns of Edward IV, Richard III, and Henry VII. She also had to take into account the existing colors and structures of the Hofstra Globe Stage. “I chose colors that blended with the Globe,” she says. “We didn’t want the banners to look like an afterthought – like we added stickers to the Globe. I researched colors and symbols of the time, like the Tudor Rose, for example. In the end, Henry references uniting the red rose of the House of Lancaster and the white rose of the House of York, so I knew I’d want to incorporate the Tudor Rose [a historic red and white rose emblem] into my design.”

Richard III is Nahon’s last show at Hofstra before graduation. She was well-prepared for the rigors of this play by serving as set designer for Dream of a Common Language last semester and The House of Bernarda Alba in spring 2018. She also assisted on The Nerd and Why Torture is Wrong and the People Who Love Them. “It’s been a busy four years,” she laughs.

“One great thing about the drama program is that it’s definitely like a family,” she says. “I think what separates drama from many other majors is that we are all working together to achieve the same goal. Everything I’ve accomplished is thanks to that fact that I’ve been working with a group of supportive people who are really passionate about their craft.  I’m grateful to be a part of that.”

Summer intercessions offered no break for Nahon who caught a flight immediately after her final class last spring to work as a scenic intern at the 2018 Utah Festival of Opera & Musical Theatre. The summer before she was a carpentry intern at the Cortland Repertory Theatre. She has already landed her first job after graduation. She will head to St. Louis, Missouri, to work as a scenic artist at Stages, which has a robust summer season of musicals and plays.

Nahon knows Richard III may not be her fellow students’ first choice as a way to spend a weekend evening. However, she hopes they give Shakespeare a chance. “Everybody involved has been putting in so much time and love into this play. We’ve been trying our hardest to make it more accessible, digestible.

“I think if people come they will enjoy themselves, be amazed by the Globe Stage and appreciate what makes this play a true work of art.”