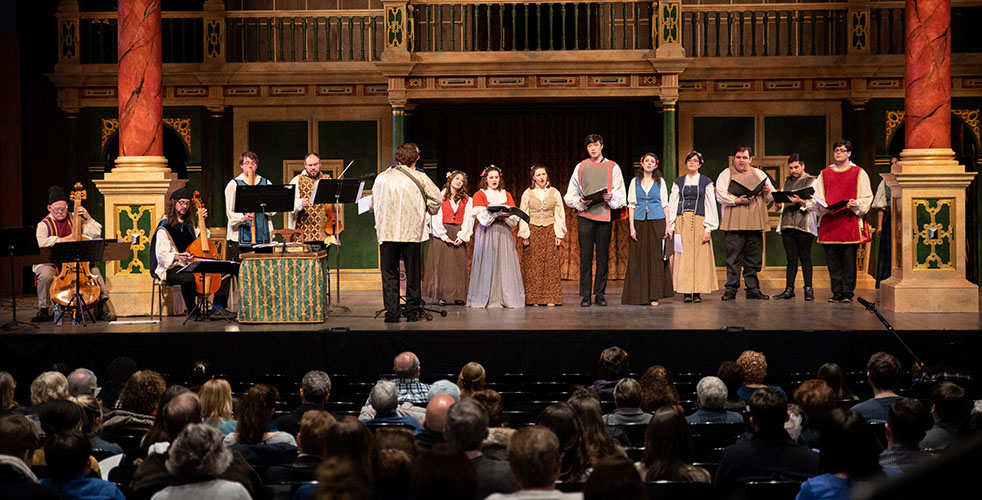 Concerts drawn from the rich treasury of early music are the signature of the Hofstra Collegium Musicum, one of the longest-running performing groups in the University’s history. The ensemble is celebrating its 50th anniversary with a concert during the Hofstra Shakespeare Festival titled Dive Thoughts, Down to My Soul.

The performance will take place on the Hofstra Globe Stage Saturday, March 9, at 2 p.m. in the Toni and Martin Sosnoff Theater at the John Cranford Adams Playhouse. The Globe Stage replica is the most authentic recreation of Shakespeare’s original stage in the US.

Dive Thoughts, Down to My Soul features songs from the 16th and early 17th centuries that talk about, or address, one’s innermost thoughts, according to director Dr. Christopher Morrongiello.

“These are the thoughts which resound more loudly in our minds, in our souls, than those that we actually utter,” he said. “We are especially fond of the songs on this theme by the great Elizabethan lutenist-songwriter John Dowland [1563–1626]. We’ll be performing his ‘Unquiet thoughts,’ ‘My thoughts are wing’d with hopes,’ and ‘Sleep wayward thoughts, and rest you with my love.’”

The Hofstra Collegium Musicum is made up largely of Hofstra students, with several alumni and members of the faculty and community also taking part.  It is comprised of a chorus, soloists, and ensembles of viols, recorders, krummhorns, sackbuts, cornetto, Renaissance flute and drum, medieval instruments, and some modern orchestral instruments.

Tickets for the Hofstra Collegium Musicum and What Fools! –a one-hour adaptation of AMidsummer Night’s Dream – are $10, $8 for senior citizens.

Members of the Hofstra community receive two free tickets upon presentation of a current HofstraCard. For tickets and information call the Hofstra Box Office at 516-463-6644, or purchase tickets online.

If seats are still available on the day of performance, tickets will be sold at the door starting 90 minutes prior to show time at the theater box office window.

(Please note, free tickets for Hofstra community members cannot be reserved online. They may be picked up at the Box Office.)

The Hofstra Collegium Musicum has presented concerts of early music every semester since it was founded by Professor Emeritus William E. Hettrick in 1969. Dr. Morrongiello, a world-renowned lutenist and expert on Elizabethan and Jacobean music, has directed the Collegium since Dr. Hettrick’s retirement from the group in 2013.

In his first year teaching at Hofstra, Dr. Hettrick formed a recorder ensemble (which included a guitarist) that played with the Hofstra Singers, a group led by faculty member Herbert Beattie, who also directed the opera theater program. They performed in concert together in the spring of 1968 and again in the fall of 1969. Both concerts were performed in the new Multipurpose Room of the Student Center.

On Dec. 17, 1969, Professor Beattie turned his vocal group over to Dr. Hettrick, who combined it with the instrumental ensemble. The two groups together – in stile concertato – became officially known as the Hofstra Collegium Musicum.

Following the 2 p.m. concert, there will be a performance of What Fools! – a one-hour adaptation of A Midsummer Night’s Dream, suitable for young audiences.