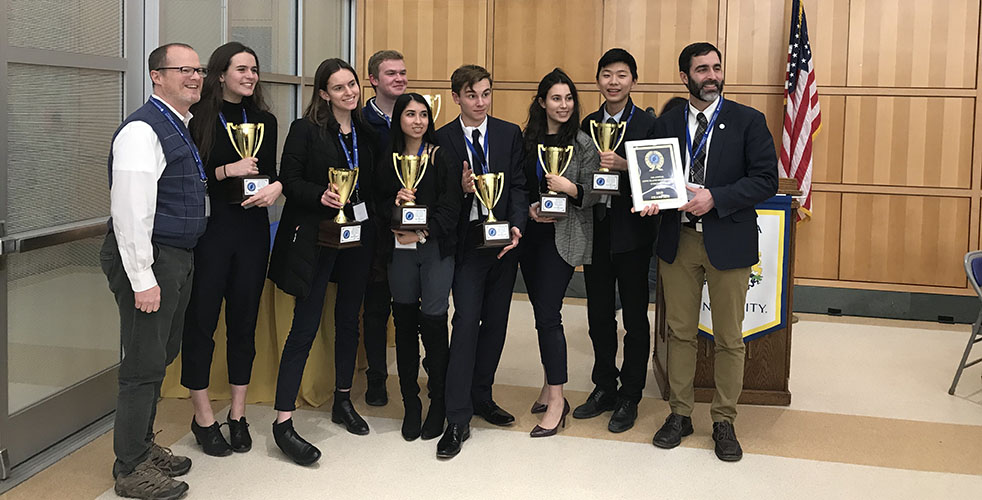 For the second consecutive year, a team from The Stony Brook School took first place in the 10th Annual Long Island High School Ethics Bowl, sponsored by Hofstra University and The Squire Family Foundation. Twenty-six teams from 14 high schools in Nassau and Suffolk counties participated in the February 2 competition at Hofstra, which encourages and promotes ethical awareness, critical thinking skills, civil discourse, civic engagement, and an appreciation for diverse points of view. This year’s regional Ethics Bowl at Hofstra was the largest, comprising approximately 160 students and 250 people total.

The seven-member team from The Stony Brook School will go on to compete at the 7th annual National High School Ethics Bowl on April 5-7, 2019, at the University of North Carolina-Chapel Hill.

The Ethics Bowl is a collaborative event in which students analyze timely ethical issues. Unlike traditional debate programs, students are not assigned opposing views. Rather, they defend the position they believe is right and win by showing that they have thought more carefully, deeply, and perceptively about the cases in question.

The Squire Family Foundation, a Long Island-based organization, is co-founder of the National High School Ethics Bowl and co-sponsor of the LI Bowl. It seeks to give all students in American elementary and secondary schools an opportunity to study philosophy in order to develop their ability to understand and evaluate their own beliefs and values, as well as those of others, so that they can become open-minded, respectful, thoughtful adults and responsible citizens.

Other winning teams of the day included:

Faculty and students of Hofstra University’s Department of Philosophy volunteer to work the Ethics Bowl and help prepare the high school teachers and students.

The Ethics Bowl is part of Hofstra’s Regional Scholars Programs, which bring middle- and high-school students from the area to campus for academic competitions and enrichment programs.