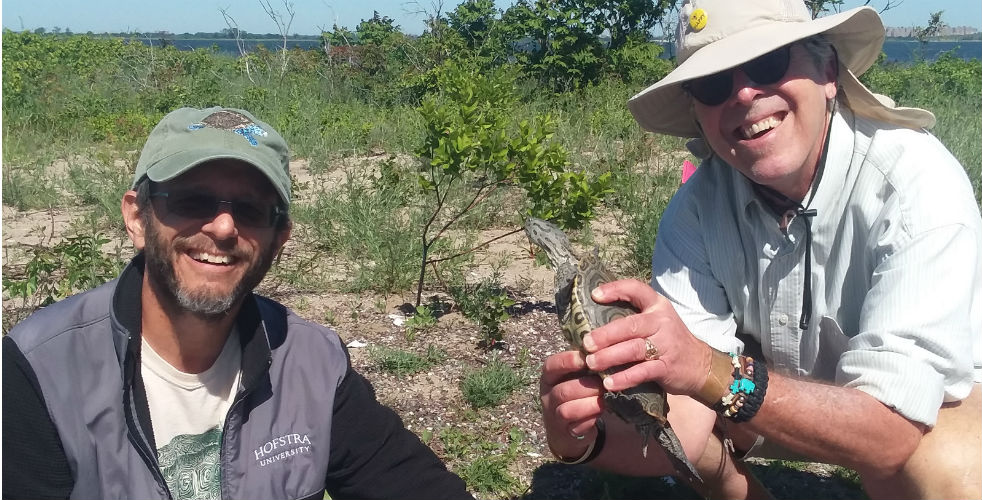 Two professors from the Lawrence Herbert School of Communication and the School of Natural Sciences and Mathematics have combined their expertise for a new Sierra Club film about diamondback terrapins, which play a key role in preserving the local ecosystem.

Film/TV professor Doug Morrow collaborated with biology professor Russell Burke, who has studied the turtles for more than 20 years.  In the almost eight-minute film, shot on a sunny day in the Jamaica Bay Wildlife Refuge, Prof. Morrow captures dozens of terrapins as they come ashore to lay their eggs.   The turtles have an important ecological role in that they help preserve local marsh grass, which in turn protects shorelines from the effects of harsh storms. In recent years, the turtles have faced threats including decreasing salt marsh habitat, pollutants in the bay, and raccoon and rat predators that attack eggs and hatchlings.

“Wherever you see healthy terrapin populations, you know you’ve got healthy salt marshes,” Dr. Burke explains in the video.  Over the last two decades, he and his students have tagged 2,000 turtles in the area, studying their growth, reproduction and survival, and publishing several studies on their findings.

The short film is one of several dealing with coastal resiliency that Prof. Morrow has produced and directed over the last year for the Atlantic Chapter of the Sierra Club, a nonprofit environmental advocacy group. His most recent one addresses the threat of annual pesticide spraying to dragonflies, which help control the mosquito population. The organization uses the films to raise awareness of these issues with both the public and legislators.

“I’m a lifelong New Yorker and grew up going to the beach all the time, so I was particularly thrilled to get involved with this project and help explain how we as a society have an impact on our coastlines,” said Prof. Morrow, who often works with nonprofits.  Among his other work, he has produced videos for the Long Island Music Hall of Fame. “I’m really grateful to be able to tell stories that might not otherwise get told.  It has made me a better teacher.”

Both professors enjoyed their collaboration.  “We had a great day,” said Dr. Burke. “Doug got some fantastic shots and also had infectious enthusiasm, which made working with him especially fun. We managed to get all the things we wanted in just a few takes.”

“I didn’t really know Russ before we started this project, but by the end, I felt like I had made a friend,” said Prof. Morrow. “The Sierra Club wanted to do a film on diamondback terrapins and he happened to be the leading scientist in this area. It was really great to watch him and his students work; you could see how dedicated they were.”