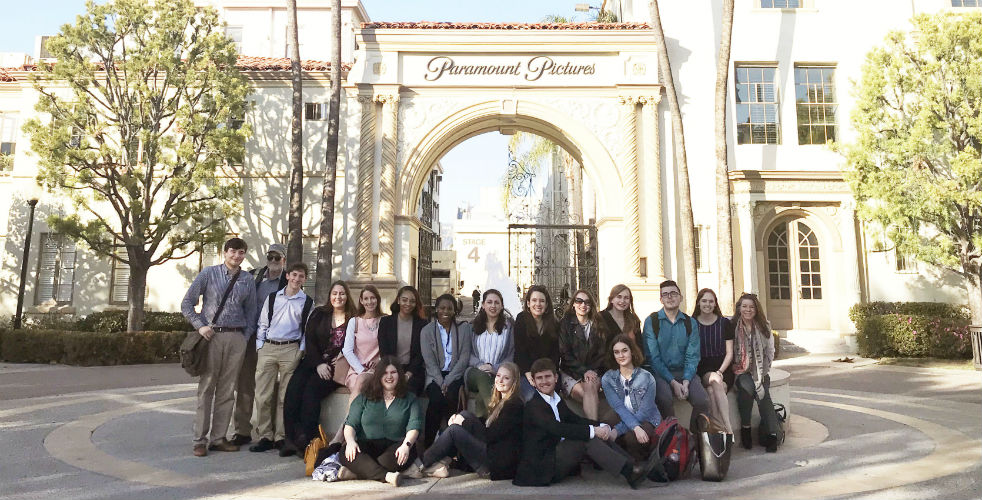 Sixteen students from the Lawrence Herbert School of Communication are exploring  media careers in nation’s entertainment capital, as part of the fifth annual “Hofstra in LA” program.

They will spend 10 days traveling around Los Angeles, where they will meet and network with Hofstra alumni and other industry leaders in fields such as television, film, radio, publicity, and arts and entertainment journalism.

Students will also attend tapings of “Real Time with Bill Maher” and “Entertainment Tonight,” and visit the offices of the NBC Brokaw News Center, Paramount Pictures, Edelman, and Netflix, among others.

A highlight of the trip includes a group dinner with alumnus Lawrence Herbert ‘51, inventor of the Pantone Matching System and the namesake of Hofstra’s communication school. Students will also join alumni and admitted students to the Class of 2023 for a reception at the DGA (Directors Guild of America) Theater Complex.

The 16 participating students include juniors, seniors, one graduate student, and a December graduate. They were selected from a competitive pool of about 40 applicants on the basis of good academic standing, faculty references, and an application.

The students are accompanied by Herbert School Associate Dean Adria Marlowe, Associate Professor of Journalism, Media Studies and Public Relations Jeff Morosoff, and Associate Professor Emeritus of Radio, Television, Film Peter Gershon, during the trip, which is from Jan. 9-19th.

The cost of the program is offset by support from the LHSC Dean’s Advisory Board, alumni, and other benefactors.  A limited number of full scholarships were also provided by Hofstra alumni to ensure that deserving students can participate in the program regardless of economic background.

“Hofstra in LA” expands upon the many opportunities Hofstra students already have to engage with alumni and industry leaders on campus, in New York City, and abroad, and allows students to make valuable connections and gain insights that can help them succeed in a very competitive market.

Learn more about the students and follow their “Hofstra in LA” experience.