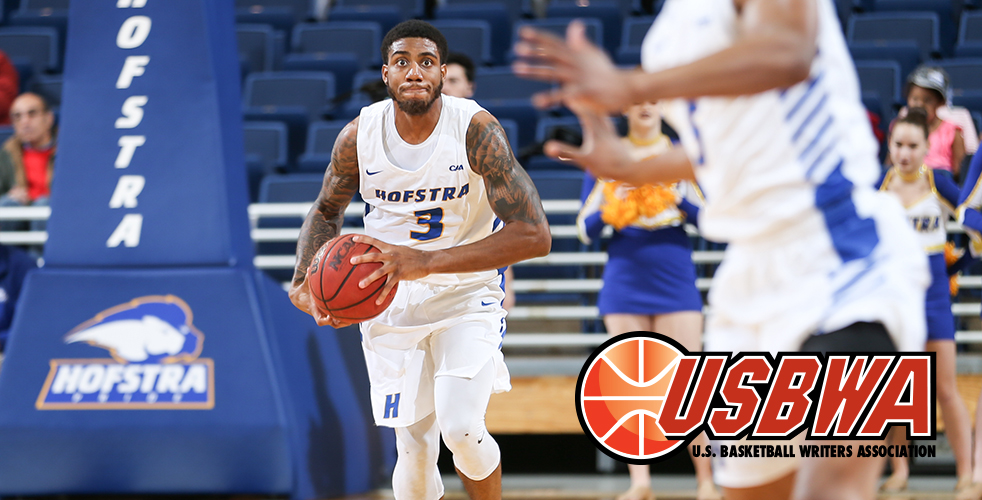 The U.S. Basketball Writers Association has selected Hofstra guard Justin Wright-Foreman as its Oscar Robertson National Player of the Week for games ending the week of Sunday, Dec. 30. The USBWA’s weekly honor is presented by Blue Ribbon College Basketball Yearbook.

Wright-Foreman is the first-ever Hofstra player to earn this prestigious honor and just the second-ever Colonial Athletic Association honoree after Willis Hall of Charleston earned the award in 2014.

As the CAA Player of the Week, Wright-Foreman was nominated for the weekly award, which was chosen by a representative of the USBWA board of directors from a list of Division I conference players of the week. The USBWA has named Oscar Robertson National Players of the Week since the 2009-10 season.

The 6-2 senior guard from Queens, N.Y., averaged 31.5 points per game, while shooting 67 percent from the field (21-31) and 63 percent from three-point range (10-16). He was also 11-13 from the free throw line and added 10 rebounds, seven assists and three steals in two games last week. Last Friday in a 91-46 rout of Delaware, he scored a game-high 29 points in just 29 minutes, while adding five rebounds and two assists. He followed that up with his fourth 30-point game of the season – and 15th of his career – with 34 points, five rebounds, five assists and two steals in a 89-75 victory over Drexel on Sunday. Wright-Foreman is now averaging 25.7 points, 4.6 rebounds and 3.8 assists per game this season.

Since the 1958-59 season, the USBWA has named a National Player of the Year. In 1998, the award was named in honor of the University of Cincinnati Hall of Famer and two-time USBWA Player of the Year Oscar Robertson. It is the nation’s oldest award and the only one named after a former player.

At the conclusion of the regular season, the USBWA will name finalists for the award, which is voted on by the entire membership.

The U.S. Basketball Writers Association was formed in 1956 at the urging of then-NCAA Executive Director Walter Byers. With some 900 members worldwide, it is one of the most influential organizations in college basketball. It has selected an All-America team since the 1956-57 season. For more information on the USBWA and the Oscar Robertson Trophy, contact executive director Joe Mitch at 314-795-6821.

Blue Ribbon College Basketball Yearbook, the most comprehensive college basketball publication in the world, returns for its 38th season. Blue Ribbon – long-known as “The Bible of College Basketball” – gives its readers the most thorough, up-to-date and timely evaluations of every Division I team in the country. For more information about Blue Ribbon Yearbooks, visit blueribbonyearbookonline.com.